Pakistan may hang Kulbhushan Jadhav during trial: India to ICJ

DECCAN CHRONICLE WITH AGENCY INPUTS | SRIDHAR KUMARASWAMI
Published May 16, 2017, 2:03 am IST
Updated May 16, 2017, 11:08 am IST
ICJ said it would announce its order in a public hearing, the date of which will be publicly communicated.

New Delhi/The Hague: In an engaging duel at the International Court of Justice (ICJ) on Monday that saw both countries go hammer and tongs at each other, Pakistan raked up the alleged passport of former Indian naval officer Kulbhushan Jadhav to argue that India had deliberately given him a passport with a “Muslim name (Hussein Mubarak Patel)” to facilitate covert and illegal terror operations in Balochistan. It added that the Vienna Convention provisions on consular access were not intended for a “spy” involved in terror activities.

New Delhi argued before the court earlier in the day that India had not even been given consular access to Jadhav by Pakistan despite repeated requests in violation of the Vienna Convention and that the Pakistani military Court’s verdict sentencing him to death had “no credibility”.

Pakistan maintained India was “wrong in invoking the jurisdiction of this court”, arguing that India’s application was “unnecessary and misconceived” and must be dismissed.

ICJ reserves Jadhav verdict
New Delhi, in a strong plea earlier in the day, demanded the immediate suspension of the death sentence given to Jadhav by the Pakistani military court. 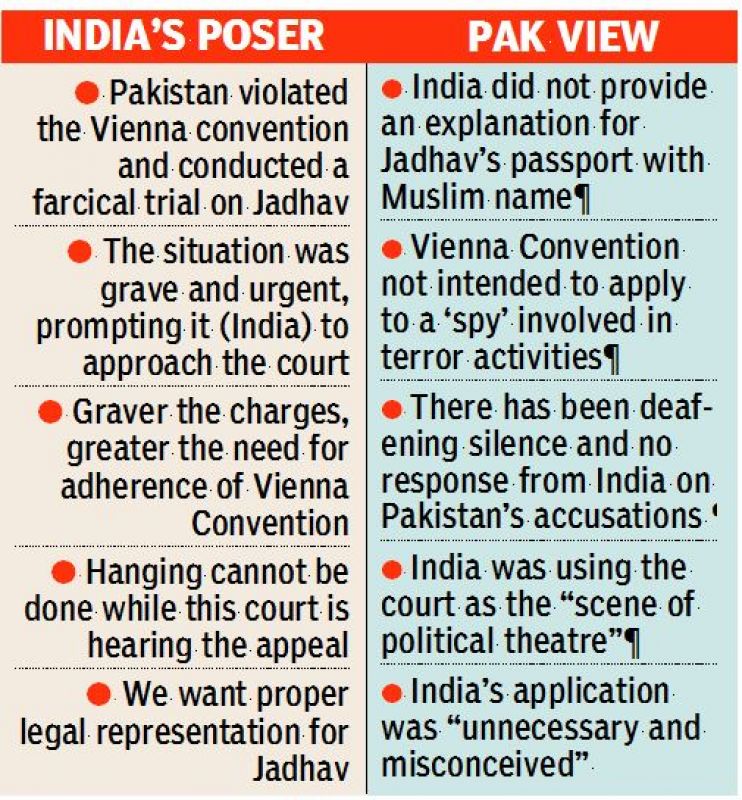 After hearing both parties, the ICJ said it would announce its order in a public hearing, the date of which will be publicly communicated.

“The graver the charges, the greater the need for continued adherence of the Vienna Convention. Jadhav has been in judicial custody without any communication with his family,” Mr Salve said. Describing the situation as “grave and urgent”, India said it had not been given the copy of the charges filed against Jadhav. India sought relief from the ICJ including immediate suspension of the sentence of death awarded to Jadhav, and restraining Pakistan from giving effect to the sentence awarded by the military court, and directing it to take steps to annul the decision of the military court.

India has accused Pakistan of “egregious violations of the Vienna Convention on Consular Relations” (hereinafter the ‘Vienna Convention’) in the matter of the detention and trial of Jadhav.

While New Delhi said Pakistan had attached conditionalities in return for consideration of consular access which was unacceptable, Islamabad however claimed that it had been prepared to grant consular access with reference to a bilateral agreement in 2008 between the two sides. While India had expressed fears that Pakistan could execute Jadhav even before the hearing was over, Islamabad said it was false that Pakistan would execute Jadhav immediately.