Hyderabad Metro Rail: It was amber all the way

Hyderabad: The delay in acquiring properties along the Metro Rail route and legal cases slowed down the project during the tenure of the Congress government between 2010 and 2014. After June 2014, the realignment issue raked up by TRS government halted work at the Assembly, Lakdi-ka-pul, Moazzamjahi Market, Sultan Bazaar and Koti. The government still needs to acquire 80 private properties. Many of them are in court.

Within a week of assuming office, Chief Minister K. Chandrasekhar Rao said in his first address to the Assembly that the government would not allow Metro Rail to pass in front of the Assembly building and in Sultan Bazaar and Moazzamjahi Market so as to protect the heritage structures. 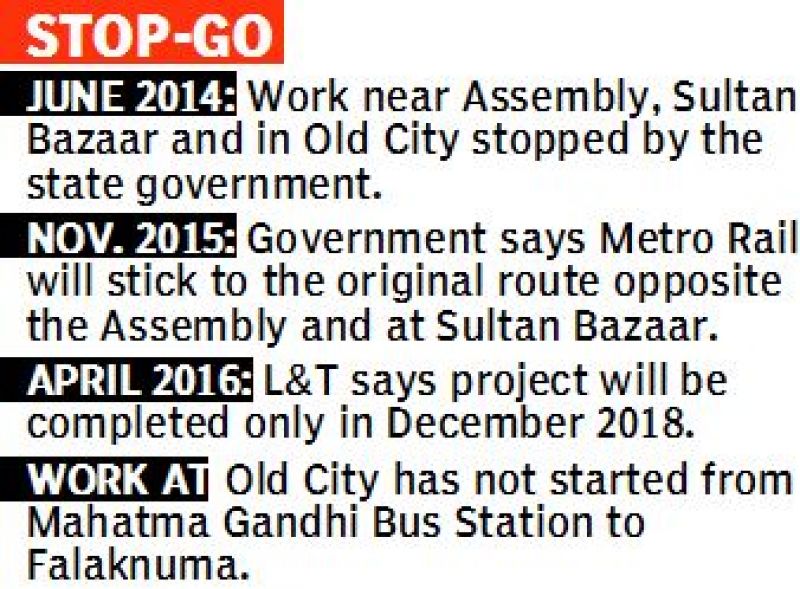 The work was halted for over a year. After examining all the options, the government cleared the original plan. It was found that realignment would be costly.

There is still confusion over the Metro Rail route in the Old City, on Corridor-II from Jubilee Bus Station to Falaknuma. The MIM wants realignment to protect hundreds of religious structures from demolition.

The government had promised to convene a meeting with the MIM and stakeholders in Old City to sort out the issue. The meeting is yet to take place.