Metro Rail was to be completed by 2014 but got delayed due to funds, land acquisition problems and signalling works.

Hyderabad: Months before L&T announced that work on the Hyderabad Metro Rail project would stretch till December 2018, the company left a long paper trail warning the government that the project would be delayed.

L&T sources said the 18-month delay was because work on the Assembly and Sultan Bazaar stretches was stopped for almost a year. 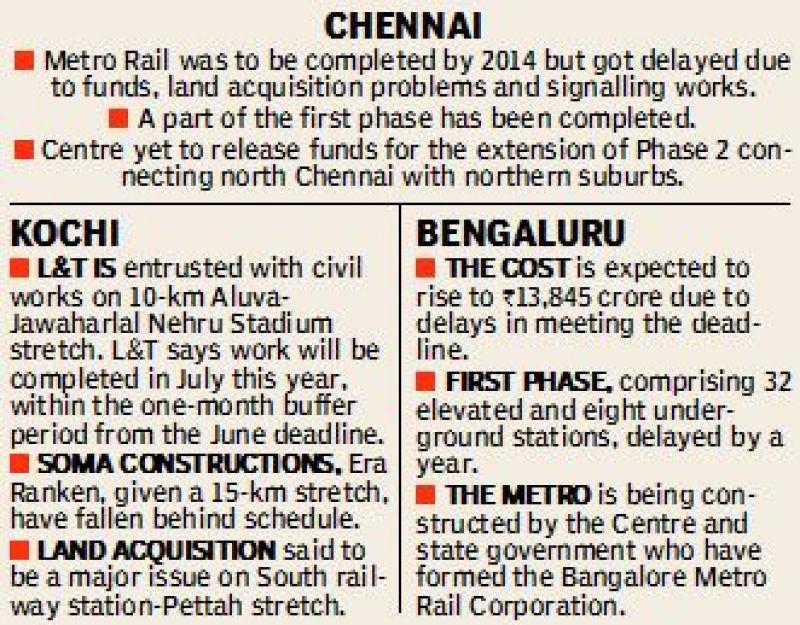 “The company has lost good time on these two stretches. Besides, work in the Old City has not been cleared,” the source said.

At Sultan Bazaar, work was slow due to low overhead cables. A senior L&T officer said, “To work with a crane is difficult because the electric wires are low. Because of this, large machines are not being deployed.”

Elsewhere, properties are under litigation and they have to be acquired before work can proceed. A senior government officer said that legal issues on acquisition of properties were being dealt with from a humanitarian perspective.

“Taking speedy decisions on those stretches is not possible. The most sensitive is the issue of Padma Hamsa Apart-ments at Secunderabad and Troydon building at Jubilee Hills,” he said.

L&T has been writing to the government about the reasons for the delay of the project constantly.

“At every point there is a communication from them. They can use them to build up a case and say the delay was due to the government’s failure in,” an officer said.

Had 26/11 gone as per LeT plan, Kasab would have gone on to live as Samir Choudhury

Prashant Kishor asks Nitish Kumar: 'Which side are you on -- Godse or Gandhi?'