Arvind Kejriwal, chief minister of Delhi and tweeter-in-chief of Aam Aadmi Party lamented in a tweet,  “This is Indian democracy. Those whom people elected are subordinate to those whom people defeated. Those whom people elected are powerless and those whom people defeated enjoy complete powers.” This  in the wake  of the verdict of Justices A K Sikri and Ashok Bushan of the Supreme Court on the  specifics of the powers and contours of the same, available with the Delhi Government, by their orders on Valentine’s Day,2019. What a loving and affectionate reaction to the constitutionally devised scheme for National Capital Territory as a Union Territory by our framers.

The same gentleman had tweeted this “A big victory for the people of Delhi, a big victory for democracy after  the Constitution bench of the Supreme Court had ruled In Govt of NCT vs Union of India in July,2018,  that Lt. General of New Delhi cannot go solo but may have to listen to the ‘aid and advice of Delhi Cabinet, except where he had good and valid reasons to be recorded on a different take on the powers vested in his authority’. The reference to the Constitution Bench became necessary as there were serious issues raised on the ‘alleged encroachment’ by the Central Government led by the BJP over the Kejriwal terrain as Chief Minister.

Five Judges of the apex court debated, discussed, delineated and concluded that NCT and Union Territories had their own place in the constitutional scheme of things. The framers had envisaged a different role for the Union Territories and in fact NCT, as the seat of the Federal State had even more variants to it. The issue was in relation to interpretation of Art.239AA of the Constitution and in a unanimous verdict ‘clipped the wings of the Lt.General who was a tool in the hands of the Central Government” according to Kejriwal.

Alas, Kejriwal may have been trained in Income Tax in his previous avatar as a bureaucrat and was an engineer by profession. But surely not trained in the niceties and nuances of the Constitution and typically as a politician who took over the reins of Delhi, thanks to the India Against Corruption movement of Gandhian Anna Hazare, thought he was assuming the mantle of a Moghul Emperor to lord over Delhi, even if BJP won majority   in the Lok Sabha. 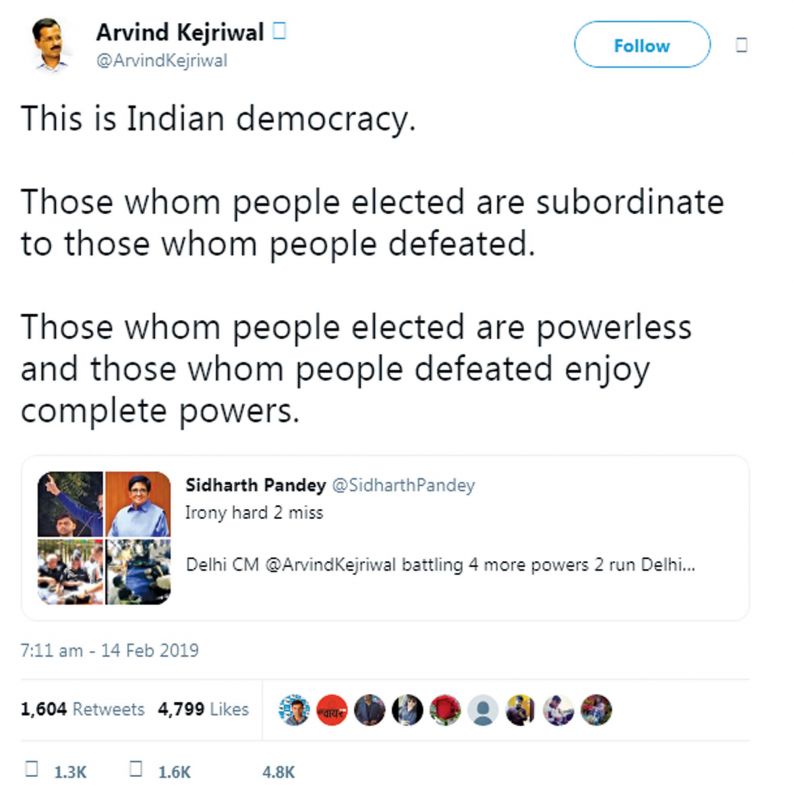 Unfortunately, his street fighter qualities came to the fore, even as Chief Minister when he ‘slept in dharna overnight’, picked up quarrels  with the bureaucracy on a daily basis, fought with the Lt.General  protesting his hegemony, and even  faced a criminal complaint for assaulting the Chief Secretary. The politician in Kejrival surfaced all the time, more so, when he ensured the exit of Prashant Bhushan, and Yogendra Yadav and several more, who all helped him to assume the throne. Typically, he became the high command of AAP and this led to his losing vision of the Constitution as it was.

He lost sight of the fact that Sheila Dikshit was Chief Minister for many a term and even BJP had its innings with the likes of Sahib Singh Verma and Madanlal Khurana. All of them did seek Statehood for Delhi but never tangled with the Central Government or the bureaucracy like Kejriwal has been. The erstwhile chief ministers were experienced politicians aware of the limitations in the power structure as chief minister of Delhi and functioned within and danced around it.

After his aborted 48-day stint, power went to his head when Kejriwal swept the polls in Delhi, decimating Congress and reducing BJP to a rump. Surely the losing politicians are unlikely to take this kindly, even if it was the verdict of the people. They were bound to get even and they knew their ways. And constitutional too.

That is where Kejriwal has exposed his ignorance. He did not know the constitutional contours of being the Chief Minister. The framers had consciously and deliberately clipped the wings of a Chief Minister of a Union Territory since the Central government had retained the right to lord over them. The Constituent Assembly debates of 1949 reveal that our forefathers felt that in the peculiarity of the formation of Union Territories, particularly Delhi, as the capital they had to ensure that the Chief Minister of NCT was very much unlike the Chief Minister of a State. Forget not the judgment of Madras High Court in affirming the right of Modi Government to nominate 3 MLAs to Puducherry Assembly was upheld by the Supreme Court, to the consternation of Congress Chief Minister Mr. V.Narayanasamy. He never complained it was a defeat for democracy.

Kejriwal had entered the election fray to become Chief Minister alive and aware of what powers he would have. If he did not, it is not the fault of the framers or the Constitution. And when the Constitution Bench verdict  was welcomed wholeheartedly by Kejriwal he failed to see that the decision only answered a reference, leaving the specifics to be dealt with as and when they arose.

And AAP raised the present issue with regard to their remit over the Anti Corruption Bureau, and the bureaucratic services in specific areas. Kejriwal had assumed that having trumped the Modi administration before the Constitution Bench, he would have his way and sway in this dispute as well. Alas, he missed the wood for the trees. His assumptions went awry when the two judges dealt with the specifics and found that the constitutional mandate was different. And the Constitution Bench had nowhere morphed the framers’ intents.

NCT was different in conception, design, colour and lookout. It cannot become a State because Kejriwal desired it to be one. That is where Kejriwal was  tripped,  not by the ‘defeated’ lot as he as proclaimed but by the mother of all laws  viz. Constitution. Kejriwal is barking up the wrong tree and crying sour grapes.

If Kejriwal aspires to become a powerful CM like Mamata Banerjee of West Bengal, then the solution resides in binding and bonding better with Mahagatbhandhan and  ‘defeating’ NDA in the lok sabha polls,  and not stopping with this, go on to get Delhi declared as a State or in the alternative get the Constitution amended to give NCT the power he envisages it should have. Truth is that the anguished tweet of Kejriwal is the  rant of a constitutionally devised lame duck chief minister and rightly trolled for all he may care.

(Author is practising advocate in the Madras High Court)

Lakhimpur Kheri: Second FIR has no mention of farmers' killing