Offering the only electric crematorium for most of East Bengaluru, where at least 10 bodies are cremated every day, Kalpalli burial ground is cramped and filthy to say the least.

Is this the way we should send our loved ones on their last journey? One would expect and wish to consign the mortal remains of family and friends into a tranquil eternity, but the city’s crematoria and burial grounds are a crying shame. They reek of human and animal refuse and, amid the hutments that squatters have made their homes, are chickens and stray dogs and all manner of other undesirables. Robbing a man of his dignity in his death is nothing short of a crime. Do we really care so little for the dead?

When the living in Bengaluru are forced to suffer pollution and bad roads every day, it is hardly surprising that the city’s dead are treated with contempt as well by its civic fathers. Take a few steps down the road towards the Kalpalli burial ground and you are appalled at the state of this domain of the dead. Offering the only electric crematorium for most of East Bengaluru, where at least 10 bodies are cremated every day, this ground is cramped and filthy to say the least.

Plastic covers, empty beer bottles and heaps of garbage take over the little space available, and the stink that greets you could probably raise the dead.
As you dare venture a little further into the ground you meet  Selva, the grave-digger. Born in the burial ground, he continues to do the job his father once did. Ask him about its sorry condition and he says its common to most such so-called resting places for the dead in the city. “There are 63 burial grounds in the city and the problem with most of them is that the BBMP is not interested in their maintenance. Even popular ones like the Hindu burial ground in Shanthinagar, Banashankari and Wilson Garden have their share of problems,” he says.

Grieving relatives, who bring the dead to the crematorium, have little to comfort them by way of amenities, he admits. “Sometimes there’s no water and often stray dogs fight over garbage while the rituals are still going on. You often see relatives holding their noses because of the stink from the garbage. I have lived here for 40 years and not even once has the BBMP bothered to carry away the garbage. Its workers come once a month and set fire to all the accumulated flower waste and plastic covers of agarbattis, camphor or food packets,” he reveals.

His sister, Shanthi says the absence of toilets in the grounds is a huge problem as well. “The old, women and children often find this a problems during funerals. Women come to us asking for toilets, and we have to tell them there are none here.”

Sathya, who also lives in the burial ground, says they are lucky they have water. “The BESCOM  wanted to disconnect the water here as the BBMP had not paid electricity charges for pumping it. We begged them to reconsider as 50 families live in the burial ground and  the water is needed for the last rites too. They gave in and now we are getting water thankfully,” he explains ruefully. 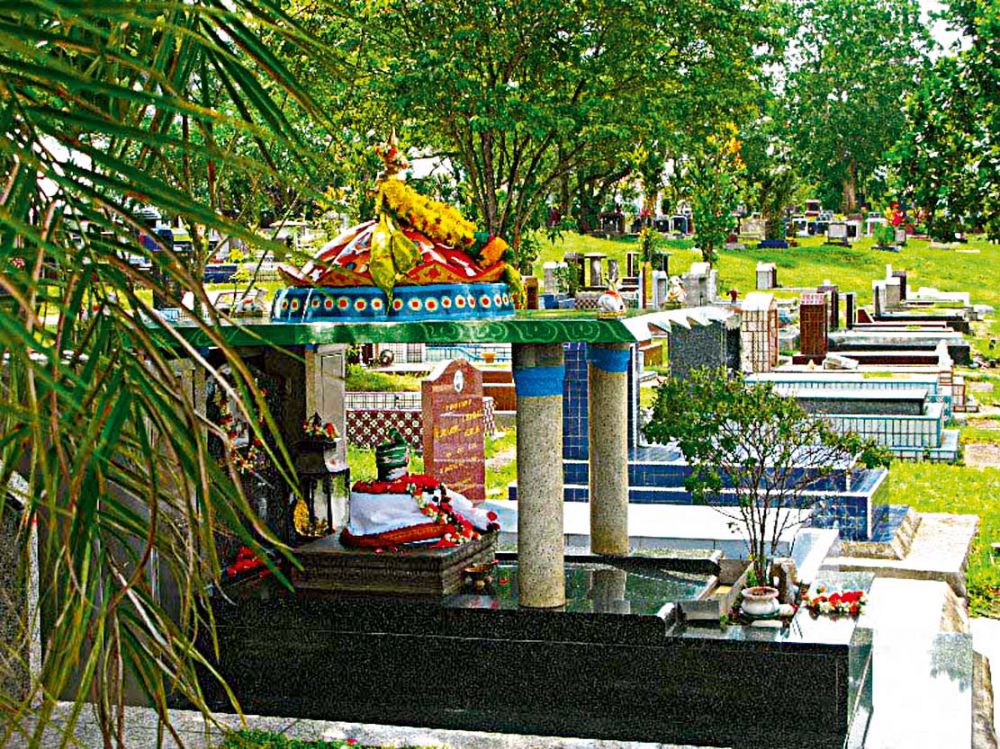 What a final resting place could be

More crematoria on the cards

Besides the existing nine electric crematoria in the city, two more are coming up at Beggars’ Colony and in Chamarajpet. There are also plans to build three new crematoria at Thanisandra, Sadaramangala and Kengeri Upanagara

People’s sentiments not a concern?

The poor condition of the burial ground is upsetting to those who come to say their last farewells to their departed loved ones here. Asks Ipshita, who recently lost a family member, “What’s the guarantee that the ash we get from the crematorium is that of our family member? How do we know that the workers haven’t mixed it with someone else’s or just given us some stranger’s ashes? It’s hard to put up with their rudeness as well.”

But people’s sentiments clearly don’t matter to the civic agency, which has so far chosen to ignore instructions from the Human Rights Commission to go in for more scientific garbage disposal and ash collection at its burials grounds. It’s not for a lack of funds as it is supposed to use part of the Rs 6 crore allocated annually for ward maintenance and capital works for the upkeep of burial grounds in the city .

It now, however, seems to have woken up to the need for repairs at the Banashankari and Wilson Garden burial grounds, where it plans to provide a high capacity water filter for public use, a refrigerator, toilets and bathrooms with a solar and electric water heating system. It also plans to provide  chairs outside the crematorium. While the Banashankari burial ground repairs will cost Rs 87.5 lakh, the work at Wilson Garden burial ground will cost it Rs 43.5 lakh.

The Kalpalli burial ground looks like a garbage dump yard with no basic amenities. Why this apathy?

What are the challenges to maintain hygiene at burial grounds?

There are several problems, but to name some, the erection of tombstones is the biggest challenge. There is lack of space in most burial grounds. Despite KMC Act mandating that tombstones should not be constructed, many put them up, which take up more space. Also, BBMP officials are lax and don’t pay attention to cleaning the burial grounds regularly. Most importantly, there are no burial grounds in any of the BDA layouts. The BDA must have planned crematoriums and burial grounds while forming layouts. Instead in some areas, the BDA has itself encroached upon burial grounds. These are just a few challenges, while there are aplenty.

How does the BBMP plan to improve the condition of crematoriums and burial grounds?

We have recently decided to revamp Banashankari and Wilson Garden burial grounds at the cost of Rs 87.5 lakh and Rs 43.5 lakh, respectively. Also, funds have been set aside in the 14th Finance Commission for maintenance and repair works at crematoriums.