Robotic surgery the way to go

DECCAN CHRONICLE. | KANIZA GARARI
Published Jul 15, 2017, 7:38 am IST
Updated Jul 15, 2017, 7:50 am IST
As the demand for surgeons trained in robotic surgeries rises, training and certifying surgeons in this is still a challenge in India.

Hyderabad: Top doctors in the city who are adept at robotic surgeries say that one has to train in such operations over a minimum of 20 surgeries to be able to master the skills and that such training can currently only be obtained in the US, Europe and South Korea.

Deccan Chronicle spoke to a number of such surgeons. These doctors were already adept at both open and laparoscopic surgeries, but robotic surgeries also require skills to precisely control tiny instruments that reach into complex organs. It is this precision that they train for abroad.

In India, robotic surgeries are currently prevalent in urological, gynaecological and oncological interventions, especially thoracic and colonrectal cancers.  Some of the city’s best surgeons have more than 100 robotic surgeries under their belt.

What is robotic surgery
Robotic surgery is carried out by surgeons trained in this method of minimally-invasive surgery using robotic arms mounted with surgical instruments that pass through tiny incisions and a 3-D camera that provides a magnified view of the area being operated upon. The surgeon controls the instruments and the robotic arms through a console in the operating room.

Dr M. Gopichand, Senior urologist surgeon:
The stereoscopic camera used in robotic surgery magnifies view of the prostate organ, which is behind the gall bladder, and makes the operation easy. The minimally-invasive procedure ensures that healthy cells and tissues around it are not scarred or removed in the process. Experienced in both open and laparoscopic surgeries, he was able to train and acquire precision in robotic surgery quickly.

Dr Neena Desai, senior gynaecologist
Robotic surgery is effective in women suffering from fibroids, endometriosis cancer, or needing removal of uterus and ovaries. Patient  recovers within 24 hours, with negligible risk of infection.“The whole concept of months of rest to recover is  done away with. No patient is confined to bed for more than 12 hours.”

70 robotic surgeries  Mostly on young women with fibroids. No scarring, little blood loss, keeps uterus in good condition for healthy pregnancy and childbirth.
Suggests-
Cost of surgery is high and not covered under insurance. Government must step in to ensure that insurance cover is available for this tech assisted method.

Dr D. Madhu, senior surgical oncologist
The robotic arms and their tiny parts are able to turn 360 degrees while the camera provides a magnified image that helps in picking out small tumours that the surgeon’s hands cannot reach. The head of the pancreas is where a lot of tumours occur. We have carried out Whipple surgeries where the head of the pancreas is removed via robotic surgery. Cancer in the lymph nodes is another challenge. Robotics makes it easy to work around them and ensure that healthy cells are unharmed.

100 robotic surgeries.
Mostly on pancreatic cancer and on small tumours deep in the body.
Suggests-
Training systems in India for robotic surgeries are not up to the mark. Training must be obtained abroad.

Surgeon’s ability to perform operation is better as it is done sitting. The robotic arm ensures that tremors in the doctor’s fingers or hands does not affect surgery.

Dr T.P.S. Bhandari, senior surgical oncologist
Robotic surgery helps as it brings the benefit of both open and laparoscopic surgery. There is place to target the tumour and remove it easily.
Some insurers cover prostate cancer, so robotic surgeries are being done.

50 robotic surgeries. In areas like the pelvic region there is less space to
manage.

Dr T. Lakshmikanth, bariatric and laparoscopic surgeon
The wristed robotic arm allows surgeon to operate in deeper and difficult to access parts, especially the stomach blood vessels, and with a greater range of motion than the human hand, thus allowing us to do things not possible with traditional and laparoscopic tools.”Surgeon’s skill is critical, so proper training is important. Meticulous planning can ensure better outcomes than open and laparoscopic surgeries.
30 robotic surgeries for bariatrics

Dr Rooma Sinha, uro-gynecologist
In robotic surgery, the arm movement is intuitive and the wrist movement is complete. This gives surgeon room and helps to precisely remove small and large fibroids and tumours in the gynaecology area. In older women, it helps due to minimal blood loss and pain. No deep scarring and so no prolonged pain.
Stitches are easily done, do not cause extra pain or uneasiness.
170 robotic surgeries, 100 surgeries were for removal of fibroids in young women

Dr Umanath Nayak, consultant head & neck surgeon
Traditionally, surgery of the thyroid is done through an incision in the lower neck. Thyroid cancers are seen in five per cent of the cases. Robotic surgery allows precise operation without opening the neck, and does away with the visible scars left behind in traditional surgery.  Head and neck surgeries difficult even with 3D imaging and robotic arms because these are small areas with nerves running all around. Decline in robotic surgeries in this category due to this.
15robotic surgeries.

Training a challenge in India 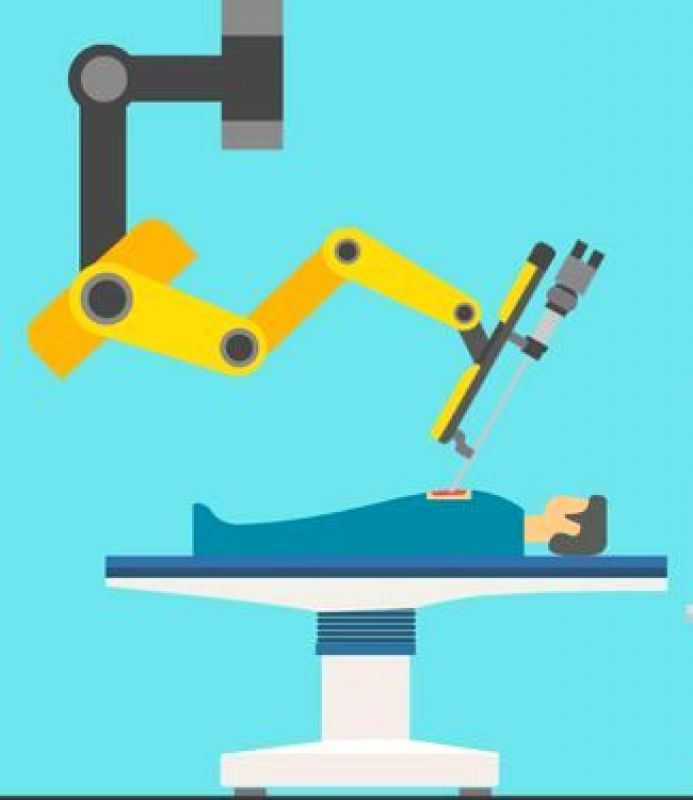 Robotic surgery, or robot-assisted surgery, is now common in US and European hospitals and is gaining acceptance among super specialty hospitals and doctors in India.

Last year, some 5,000 robotic surgeries were carried out in India, with Hyderabad alone accounting for a thousand of them. This number is set to rise to 8,000 surgeries next year. But even as the demand for surgeons trained in robotic surgeries rises, training and certifying surgeons in this is still a challenge in India.

“A few companies are providing certification programmes but these are not up to the mark compared to programmes in the West. There is a lot of scope (for robotic surgery training) in India, but it has to be done properly and the government must be involved in it right from the start,” says a senior doctor.

While training institutions have obtained a few clearances, it is stipulated that doctors have to first train and practice on pigs, which has proved to be a major roadblock with animal lovers objecting to it.

Major hospitals in the city therefore mostly opt to have their doctors trained abroad, or rarely call in foreign experts to train them in the country.