Explosive found in UP house

Security tightened outside Uttar Pradesh assembly in the wake of explosive found inside (Photo: PTI)

Lucknow: The recovery of deadly explosive PETN from the UP assembly has made the Yogi Adityanath government renew its security related policies.

After the forensic examination revealed that a white powder packet found inside the Uttar Pradesh assembly on Wednesday was actually a deadly explosive called PETN (Pentaerythritol Tetranitrate), the chief minister and the Speaker announced new security measures.

Terming it as a possible terror conspiracy, the chief minister said in the state assembly on Friday that the packet had been discovered by the cleaning staff on Wednesday and was sent for forensic examination. 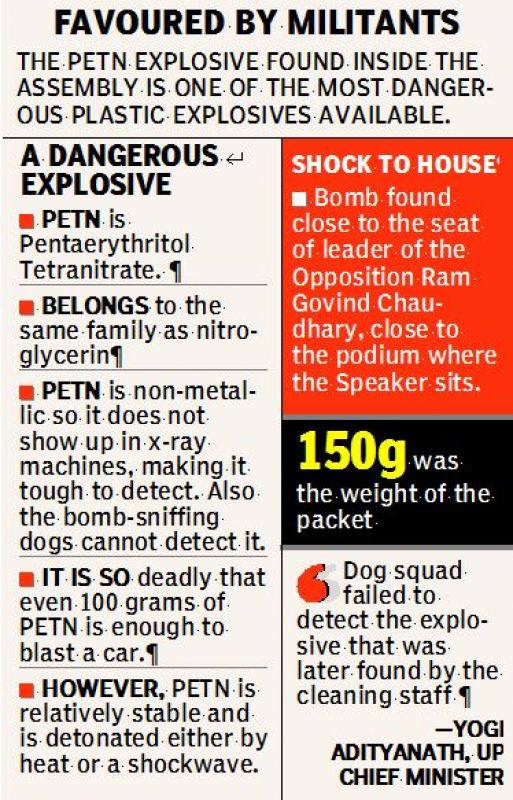 The white powder had been identified as the deadly PETN that could trigger off deadly explosion if used with a detonator..

The chief minister who convened a high level meeting on security in view of the development late on Thursday night and again on Friday morning, said, “PETN is a highly dangerous explosive and the packet contained 150 grams of the powder.

Experts say that only 500 grams is needed to blow up the Vidhan Sabha. Even the dog squad failed to trace the packet because it does not have any smell”, he said. The packet , found during the cleaning of the assembly by the staff.