A man wears an anti-pollution mask for protection against air pollution in New Delhi. A thick blanket of haze continued to envelop Delhi and parts of the National Capital Region (NCR). (Photo: PTI)

New Delhi: Delhi's air quality remained severe for the fourth consecutive day on Friday, even as authorities expressed hope that the condition would improve with strong winds expected to clear the stagnant air.

The PM10 level (presence of particles with diameter less than 10 mm) was recorded at 754 in Delhi-NCR and 801 in Delhi, leading to hazy conditions.

The PM2.5 level (presence of particles with diameter less than 2.5 mm) that deteriorated from 'very poor' to 'severe' showed improvement today at 184 in Delhi region and 175 in Delhi NCR, said the Central Pollution Control Board (CPCB) data.

According to the CPCB, the air quality index (AQI), a measurement of the concentration of toxic particulate matter in air, at several places in Delhi remained over 500. 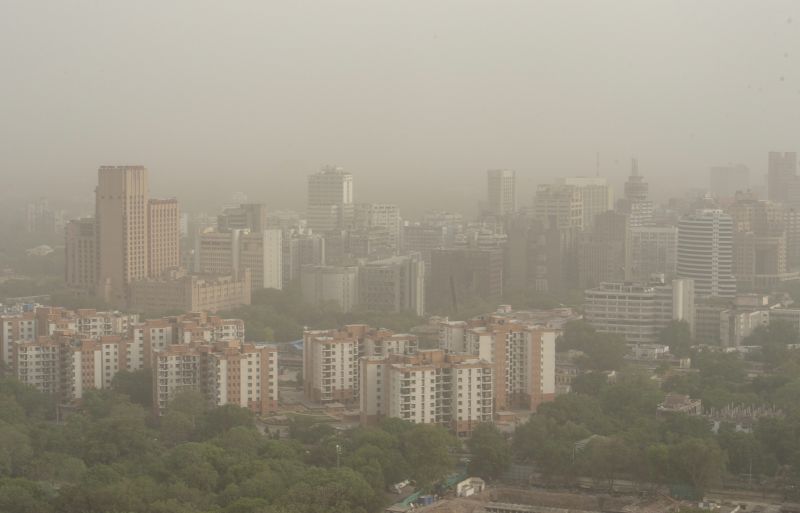 As the national capital region struggles with a severe dust pollution, Lieutenant Governor Anil Baijal had on Thursday ordered stoppage of all civil construction activities across the city till Sunday as part of the emergency measures which also include intensifying mechanical road sweeping.

Strong winds are expected to clear the air, said Gufran Beig, a scientist at the Centre-run System of Air Quality and Weather Forecasting and Research institute (SAFAR).

"The air quality is expected to improve and clear the stagnated dusty air that has primarily led to the rise in the pollution level," he said.

The India Meteorological Department said that the strong winds are expected to continue over the region. "Strong dust raising winds of the order of 25-35 kmph likely to continue over Rajasthan, Punjab, Haryana, Chandigarh and Delhi and west Uttar Pradesh during next 24 hours," the IMD said.

It also predicted thunderstorms at isolated places over the city in the coming days, bringing relief from the dusty air.