Students and their parents seen with the CET officials for the verification of documents at CET Cell, Malleswaram, in Bengaluru on Tuesday (Photot: DC)

Bengaluru: As per the calendar of events published by the Karnataka Examination Authority (KEA), entry for the allotment of various professional courses began on Tuesday. But students who visited the KEA website to check the available streams and college seats for selection were in for a rude shock. No seats were available for the selection as KEA did not publish the seat matrix!
The only information displayed by the KEA on its website was the draft engineering seat matrix.

The students said that they were confused with the delay in the publication of seat matrix and called the KEA office. They said KEA should have completed the process by this time.

No info on Facebook page
The students who visited the Facebook page of KEA found that there were no new announcements. “The Facebook page was last updated in 2013.  Every year, students face several problems, but officials do not bother to solve them,” said Rajini Gunashekhar, a student.

The students said that this year, confusion prevails over government quota seats in private medical and dental colleges. “A consensual agreement between the state government and private engineering colleges over seat matrix and fee structure has been signed already. AICTE also completed the recognition process. There is clarity about the available government medical college. This is because recently, the Medical Council of India (MCI) issued permission to three more government medical colleges. All these colleges have an annual intake of 150 seats. So why is the seat matrix not prepared,” he wanted to know. Soujanya Guruprasad, a medical aspirant from Malleswaram, said, “I called the KEA helpline, but it was busy continuously. I have now decided to visit the KEA office.” 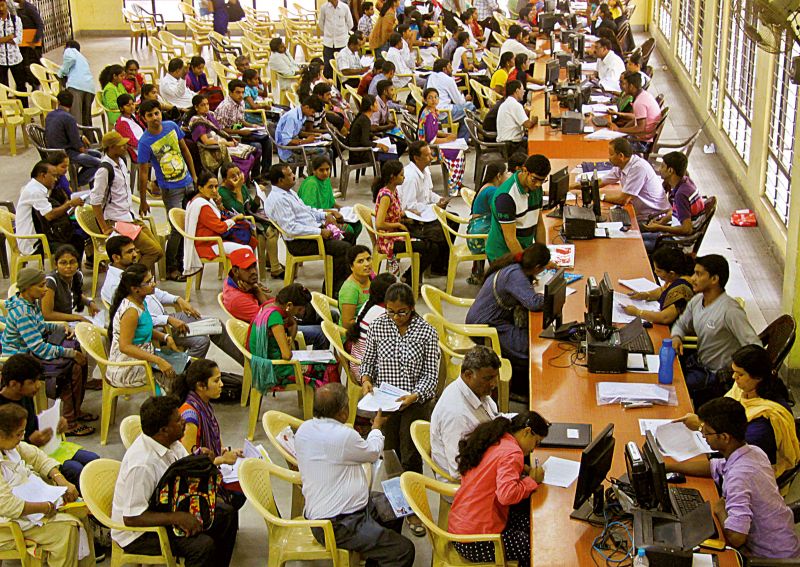 Students and their parents seen with the CET officials for the verification of documents at CET Cell, Malleswaram, in Bengaluru on Tuesday (Photo: DC)

Training session
KEA, which could not stick to its calendar, has provided a training link on option entry for students. “KEA cannot be blamed for this fiasco. Its responsibility is only allotment of seats released by the state government. Engineering seat matrix is ready. But there is a delay on medical seats due to technical reasons,” an officer
said.

Permission letters reach state government
After the students’ protest, the government has released the letters written by the union health ministry to the state medical education secretary over granting permission to three new medical colleges – Karwar, Chamarajanagar and Kodagu. The three colleges have been allowed to admit 150 students each.
“If permission is already issued to government medical colleges, why this delay,” asked Anand Kumar, a medical seat aspirant.

More time needed: Medical Education Minister
Medical Education Minister Dr Sharan Prakash Patil said that the medical seat matrix is not ready. “Officials have requested three-four more days to prepare the matrix. There will be a certain amount of delay. Students need not get tensed. A clear picture on the number of seats will be emerge soon,” he said.

Officials at the state directorate of technical education said that the draft seat matrix related to government and private engineering colleges, including deemed universities, was published last week. “We forwarded the seat matrix to KEA, but we are not sure why it is not made public,” said an officer, who wished not to be named. “We are expecting the publication of the seat matrix on the KEA website any time on Tuesday,” he said.

We are working on the seat matrix of all the streams and everything will be uploaded on the KEA website to allow the students to make their option entries
— D.S. Ramesh, Executive Director, KEA

Even the officials of the medical education department are not sure of the reason behind the delay in uploading the seat matrix. “All the government medical and dental colleges were issued permission by the MCI and the union health ministry to admit students for the 2016-17. Officials should have completed the seat matrix well in advance to ensure that students are not put to trouble,” said an officer.

Mr D.S. Ramesh, Executive Director, KEA, said that the seat matrix related to all courses including pharma sciences, pharma, engineering and architecture are ready and will be uploaded by Tuesday night. “Only the medical seat matrix is not available. We are working on the seat matrix of all the streams and everything will be uploaded on the KEA website to allow the students to make their option entries,” he said.