Centre to focus on middle class, looks beyond Garibi Hatao

NEW DELHI: Sensing that the middle class, which had overwhelmingly voted for the BJP during the 2014 Lok Sabha elections, was moving away from the party, the Narendra Modi sarkar has decided to bring its focus back on to this main support base.

A concerned government is seriously considering keeping India’s rising middle class as the focus of its future vision for the period beyond 2016-17, rather than only poverty elimination which was at the core of Indira Gandhi’s 1971 election bid marked by the slogan “Garibi Hatao”.

A closed-door meeting at the Niti Aayog last week, chaired by vice-chairman Dr Arvind Panagariya and attended by the country’s top economists, is learnt to have sought views from stakeholders on firming up a vision document which will consist of a 15-year National Development Agenda. Niti Aayog is giving final shape to the document under the  supervision of the PMO. 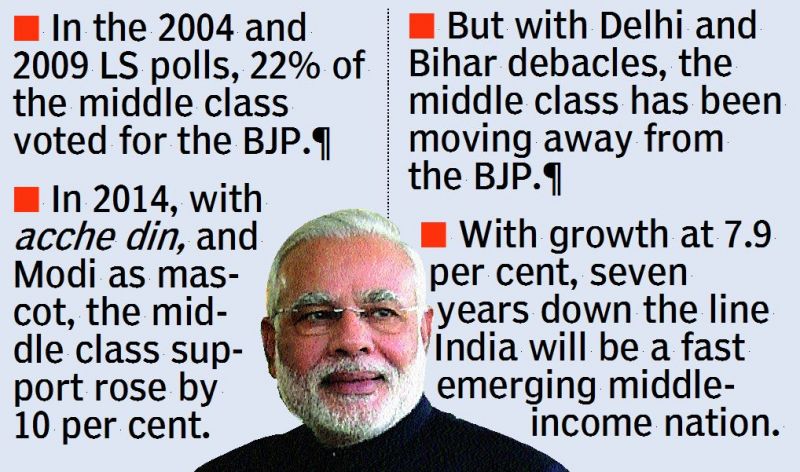 The middle class has been one of the core vote banks of the BJP and had been growing steadily. With India’s current economic growth at 7.9 per cent, seven years down the line India will be a fast emerging middle income nation.

The focus of the vision document would be on the emerging middle class rather than poverty, a section of the intelligentsia, which has given its ideas to the Aayog, was of the view.