Hyderabad: Negligent biker ‘flies’, kills self, boy in a car

The badly damaged car after the speeding bike landed on its windshield killing the passenger on the front seat.

Hyderabad: It looked like an action sequence straight out of a film, except that it was real life and not reel life.

A biker, in an attempt to overtake a bus, collided with a car coming from the opposite direction after he was flung in the air along with his bike. The bike landed on the windshield of the car.

The accident occurred in Ranga Reddy district on Sunday. The biker and an eight-year-old boy travelling in the car were killed.

Three others sustained severe injuries. The victims were identified as Sairam (the biker) and Harshad, the boy. 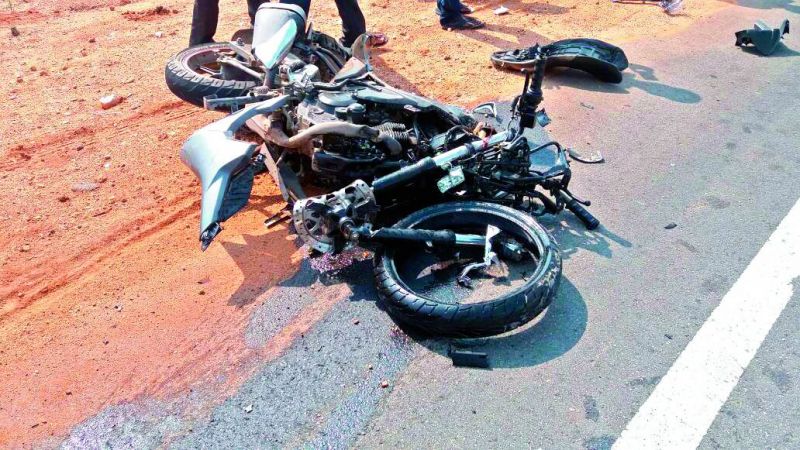 The impact from hurtling into the car left the motorbike involved in the accident a mangled wreck.According to police, Sairam 27, an employee of a private firm, hailing from Balmuru village in Ranga Reddy, was going to Achampeta on his bike with his friend Mogulaiah. When they reached Muccharla Junction, Sairam tried to overtake an RTC bus without noticing a car coming from the opposite direction. He applied sudden brakes due to which the biker (and the bike) flew in the air and landed on the windshield of the car.

“The front wheel of the bike hit Harshad sitting on the front left seat in the car, killing him on the spot. Sairam who landed on the car top sustained severe head injury and multiple fractures and died on the spot,” S-I G. Srikanth said.

Police found that Harshad, resident of Hyderabad, was going to Kadthal to attend a family function with his grandfather Jani Bhai, who was driving the car.

Passersby saw the incident and alerted the police. Sairam’s friend Mogulaiah and another passenger in the car sustained severe injuries.

Mogulaiah’s condition is said to be critical. Police registered a case of accidental death and causing injuries against Sairam.