Mumbai: ‘Ask your mother/daughter whether she had free sex.’ This is what Facebook user by the name ‘GM Das’ commented on a post about All India Progressive Women"s Association Secretary Kavita Krishnan’s views on ‘free sex.’

But little did he know whom he was messing with.

While Kavita’s response was a befitting reply in itself, it was the comment by her mother that nailed it.

“Er, yes, my mother did. Hopefully so did yours. Because if the woman is not free, it is not sex but rape. Get it,” Kavita said.

But dropping the bomb, Lakshmi Krishnan, Kavita’s mother said “Hi GM Das! I am Kavita's mother. Of course I had free sex. I should jolly well hope so! As and when I wanted, with the person I wanted. And I fight for every woman and man to have sex according to their consent. Never unfree, never forced.” 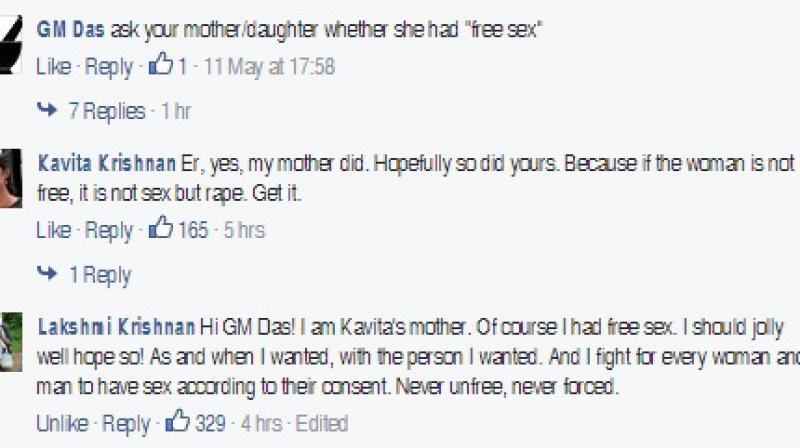 The post questioned BJP leader Subramanian Swamy’s attack against Kavita in a live TV debate, calling her a “Naxalite who has free sex.”

Friendship isn't about retaliation, says Rahul Gandhi as India buckles to US pressure

Rahul Gandhi writes to Modi: Total lockdown is not for India