Chennaiites give thumbs up to Defence Expo

Children pose in front of a flight model on display. (Photo:DC)

India has gained huge respect in defence field: Governor Banwarilal Purohit
With a slew of memorandum of understandings (MOU) and Rs,000 crore of local businesses, the tenth edition of DefExpo, which had attracted defence manufacturers and buyers to Chennai came to an end on Saturday.

Speaking at the valedictory function of the four-day event that started on April 11, Governor Banwarilal Purohit said that India’s capabilities in defence production are being respected internationally and enjoy worldwide acceptance. “The remarkable strides in missile technology made by the Defence Research and Development Organisation (DRDO) in conjunction with the Army, Navy and Air Force are the envy of the world,” he said.

According to the organizers, DefExpo had witnessed a participation of delegations from 70 countries and stalls from major multinational defence equipment manufacturers along with Indian manufacturers. “As many as 539 Indian companies have participated in the expo. 162 companies were from foreign countries,” one of the organizers said. Ministry of Defence, in accordance with the tagline of DefExpo, ‘India: The Emerging Defence Manufacturing Hub’, had also allocated 15 per cent of the expo space exclusively for the Indian Small and Medium Enterprises (SMEs).

DefExpo also allocated space for India Pavilion where public and private sector companies set up stalls. Many Tamil Nadu based defence component manufacturers set up stalls in TN Pavilion. “The pavilions erected by the Ministry of Defence with the support and partnership by public sector and private sector giants such as Bharat Electronics, Hindustan Aeronautics LTD, Larsen & Toubro, The Tata's etc. provided a range of military equipment that many nations of the world will be aspiring to purchase,” Governor Purohit said.

However, the organizers failed to ascertain details of the total business deals achieved in the expo and number of MoUs signed between companies. “As per the PSUs concerned 12 MoUs have been signed by DRDO with various companies, while 7 MoUs have been entered between India and Russia. But the details of private to private MoUs have to be collected. The numbers will be released in a week or so,” Ajay Kumar, defence production secretary said on the sidelines of the valedictory event.  He also added that Tamil Nadu has the variety of resources which could be utilized to form defence corridor in the state.

City keeps date with Naval warships
The mention of warships would only bring to one's mind the battle scenes on the high seas so conspicuously depicted in the films. But seeing the Indian Navy warships at the Chennai harbour is something that aroused among the visitors patriotism and a sense of awe for the sailor-officers who guard our country.

Families who chose to visit the Indian navy vessels were thrilled to see the kind of ships that are used and impressed with the technology that drives the vessels. School students in their uniform were given the first preference to board the ships and gain a first hand experience of the life of naval men. The response from the members of the public has been so overwhelming that the navy had permitted more persons that it had originally planned to allow. 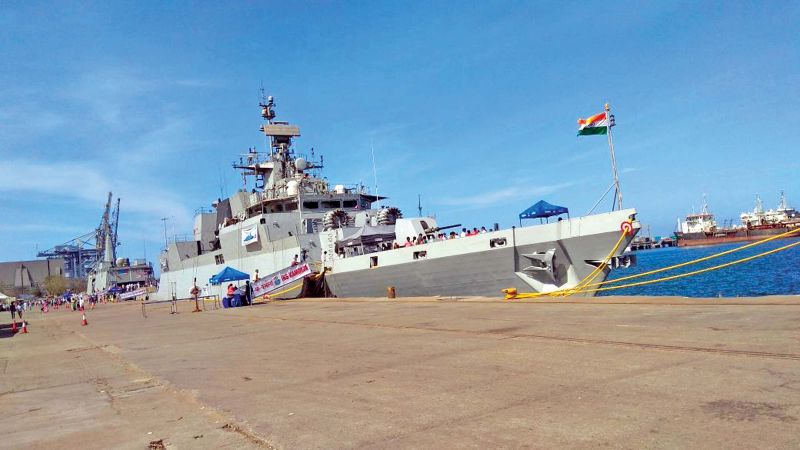 The Indian Navy warship docked at Chennai port remains a cynosure of all eyes. (Photo:DC)

On Friday alone over 10,000 people had thronged the Island Grounds to have a glimpse of the naval warships docked at the Chennai port. The four indigenously built naval warships: Sahyadri, Sumitra, Kamorta and Airavat, were displayed for public viewing as part of the DefExpo 2018. The Indian Navy managed to ferry all the visitors who had made a beeline to the Island Grounds from where they were transported to the port. The exhibition will continue on Sunday from 7 a.m. to 4 p.m. Visitors need to possess a valid identity card to be allowed to the ships.

Defence Minister Nirmala Sitharaman has said that more buses will ply from Island Ground to ferry visitors to the naval ships. In a series of tweets, she has said there is no limit on the number of visitors and two more ships will be added for visiting. Families started thronging the Island Grounds from as early as 7.30 am. and they were taken in batches. At one point, the queue of visitors at the entrance gate almost stretched to 500 metres and the police had a tough time in regulating them “Despite the wait, the visit to the majestic ships lined up at the harbour was really worth,” says Ganesan, who visited along with his wife and two teen-aged sons.

ECR, OMR closed due to traffic snarls
The East Coast Road and Old Mahabalipuram Road, the two roads connecting Thiruvidanthai, where DefExpo is conducted, in Chennai had come to a standstill as thousands of vehicles headed to the expo venue.

Many persons from the city had to return to their home. “We have started journey at 7 am in the morning. But we could able reach the venue only at 12 pm,” B. Nagarajan of Chennai said. 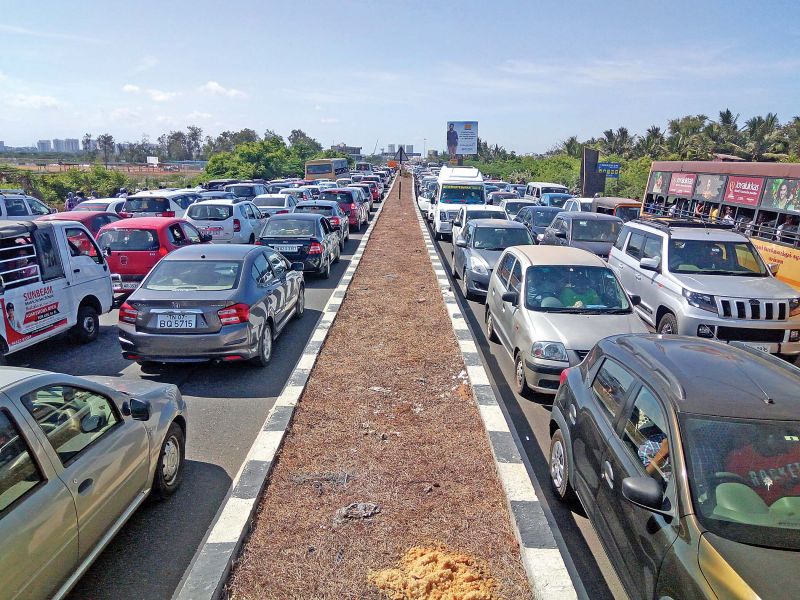 With a large number of people heading to expo, ECR traffic was badly hit . (Photo:DC)

Meanwhile, many visitors were forced to return midway. “My friend and his family returned home because they have to wait for hours to reach the venue. But I have arrived somehow,” R. Bala of Nungambakkam said.

The return journey on the evening also turned to be a testing ordeal as the vehicles had moved inch by inch. Although the gates of the expo closed at around 5 pm, it took one hour to reach East Coast Road, which is located at a few hundred meters from the expo ground.

Last day of expo: All roads lead to Thiruvidanthai
Organisers of DefExpo had a tough time on a public day as more than a lakh visitors visited the expo to witness the Indian and foreign-made weapons in one place. During the valedictory function of the expo, Ajay Kumar, secretary of defence production, said that he was expecting 50,000 visitors to see the DefExpo. But Chennaiites had come to the expo ground and waited in long queues until the gates opened.Although the visitors had to undergo severe scanning process by security personnel including CRPF at the opening of the gates, the checking had turned into a mere ceremony.

“We did not expect this much of footfall at the beginning. The number had touched more than one lakh at around 3 pm,” one of the organisers said. Among the weapons, the Arjun tank and other heavy armoured vehicles stationed at the expo area attracted many youngsters, on which they climbed to take a photo with the Army men. 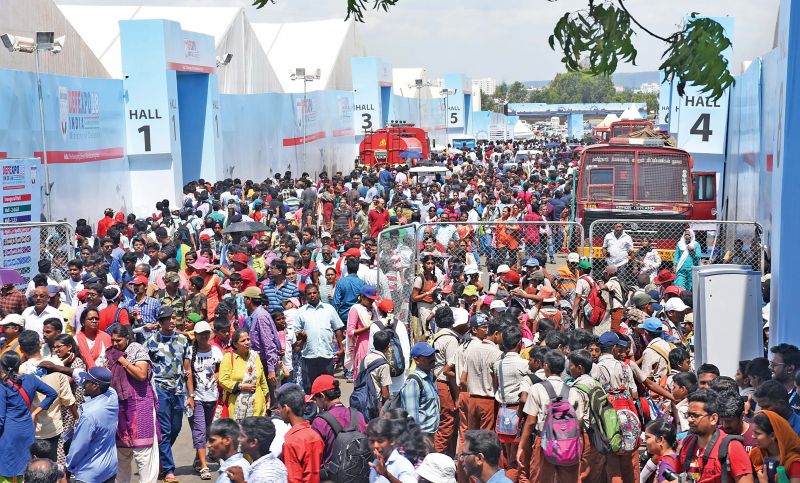 Organisers of DefExpo had a tough time on a public day as more than a lakh visitors visited the expo to witness the Indian and foreign-made weapons in one place.

The Army men and security personnel also allowed the visitors to take pictures with them. At the same time, the visitors were denied the close look of light weapons such as rifles, helmets and bombs. “The organizers removed small equipment and I am disappointed over not seeing assault rifles. But the government allowed us to see the military equipment, which is appreciable,” M.M. Kumar of Arcot said.

But many of the foreign exhibitors had started to pack their things while the expo was underway which made the organisers to repeatedly request them to wait for the closure of the expo. “Many exhibitors had failed to explain about the weapons they showcased in their stalls. I am from accountancy background and I don't know anything about engineering. At the same time, I welcome the move of allowing us inside,” V. Veema Raj of Kovilpatti said.

With the unprecedented crowd came severe shortcomings as the minimal toilet facilities ran out of the water. Also, some visitors had expressed discontent because of the exorbitant rates of food items.