One ordeal over, another begins

Just when II PU students started to breathe easy that one ordeal – the exams and re-exams – was over, another begins. Lecturers are on strike, refusing to mark answer scripts until the government agrees to pay them better.

Just when II PU students started to breathe easy that one ordeal – the exams and re-exams – was over, another begins. Lecturers are on strike, refusing to mark answer scripts until the government agrees to pay them better. And just like the problem of question paper leaks, the problem of teachers’ pay is also a recurring issue – one that successive governments have made no serious effort to resolve. In the process, students at a crucial juncture of their education and future careers are being subjected to untold pressures. Doesn’t anybody in government care?

The problems of the II PU students seem to be far from over. Although their question paper leak ordeal ended after the last Chemistry re-exam  went off without a hitch, uncertainty continues over the valuation of their answer scripts with the PU lecturers' association boycotting it over their demand for a salary hike.   Seven rounds of talks later, neither the government nor the lecturers seem willing to give an inch, leaving the students’ future in limbo.

But  the  PU lecturers insist they have no choice but to take a stand on the issue as they have been paid less than their counterparts in neighbouring states for years now. The first time they boycotted valuation was in 1998 to demand better pay,  but it was in 2013 that the then government appointed the Kumar Naik committee to look into their pleas for a restructuring of their salaries. Mr  Naik, who was then commissioner of the Department of Primary and Secondary Education, submitted his report to the state government the same year, recommending drastic increase in their salaries and perks. But with the government making no move to accept his recommendations for the last two years,  the PU lecturers are on the warpath again.

Both PU and education department officers contend accepting the Kumar Naik report in toto could have consequences as other  government employees too may then come out with similar demands.

“Issues related to salaries and perks should ideally be resolved through the wage board and not by an ad hoc committee. The  BJP government formed the Kumar Naik committee without any basis and now the lecturers are using its report to  blackmail us. Valuation is the easiest tool available for both the PU lecturers and the SSLC teachers to hold the administration to ransom,” rued an officer of the education department.

While the lecturers and the government haggle, the students are forced to remain mute spectators, although the outcome is crucial to their futures. “Over 1.74 lakh science students who are appearing for various national level admission tests are now under pressure because of the lecturers’ agitation. First we were anxious  over the question paper leaks and now we are worried about the quality of the valuation if it is done too fast to meet the deadline for announcement  of results by unwilling lecturers, ” laments a student of a private college in Malles waram, Ranjini.

It's not as if the strike is not impacting the  lecturers themselves as some have children appearing for tests for admission to professional courses as well. One lecturer participating  in the ongoing strike at Freedom park said his daughter too had appeared for the PU final examination and was tense over the results as she was keen on pursuing medicine as a career . “She is worried she may have to pay a heavy price if this strike continues,” he admitted. 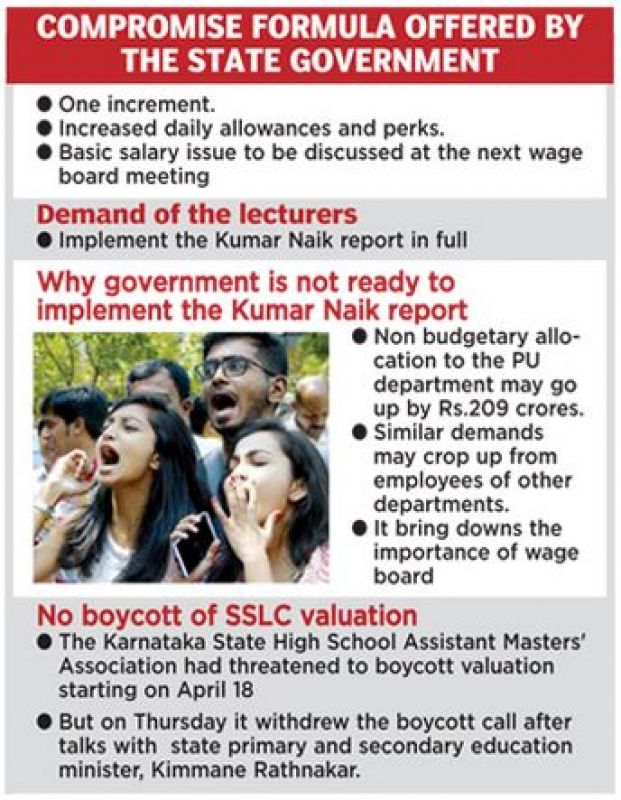 And now, govt. threatens to evoke ESMA on teachers!
Although the state government has threatened to use the Essential Services Maintenance Act (ESMA) against the PU lecturers boycotting  valuation of the II PU final examination for the last 10 days,  experts believe this may not be the  solution and suggest  it look into their demands in the context of the existing wage board provisions instead.

An advocate, Shrikanth Adiga, recalls that  ESMA has been imposed  several times over the last few years, the most recent being during the truckers' strike "But it made little impact. Although union leaders are arrested, never has a strike been withdrawn after the imposition of ESMA. It’s only talks that have broken the logjams . You cannot force anyone to work,” he reasoned.

A retired officer of the education department also believes that talks are the only way out. "This demand of the lecturers goes back several years and the government was aware that they planned to boycott valuation this year. But its sad that students have to suffer because of this," he said, also pointing out that  if the lecturers claimed they could not do the valuation work on personal or health grounds, the PU board could do nothing. “So, ESMA is of no use in the final analysis," he maintained President of the PU lecturers association, Thimmayya Purle, too said agitating lecturers were not afraid of ESMA."I have been arrested several times in the past. So one more arrest under ESMA, will not matter," he added.

How the valuation boycott impact the students

The Department of Pre-University Education (DPE) has expressed confidence that agitating PU lecturers, who are boycotting the II PU valuation, will turn up from Friday. After emerging from another round of talks with the lecturers, Ramegowda, director PUE told Deccan Chronicle that he was confident that the problem will be resolved by Friday. "We do not have any alternative as I am confident that lecturers will join the valuation works from Friday," he said.

Meanwhile the state government has listed 7,000 lecturers working in the private un-aided PU colleges, who have more than five years of teaching experience and taught at PU level, for the valuation. "All these lecturers will be give a day's training at all district quarters. Later they will be utilised for the valuation work," said an officer. Family members roped in: The agitating PU lecturers have decided to involve their family members in the ongoing fast unto death, which entered the second day on Thursday at Freedom Park.

Students, parents must not suffer in this tussle: Prof. VK Acharya, academician
It is unfair to create such confusion among students and their parents.
Most students, especially those doing science in the pre-university course, work hard for over a year to get good marks in the final examination as it is the passport to their dream course. A difference of even one mark can jeopardise their dream. But now PU lecturers are using their vulnerability to blackmail the government.

Their demands may be genuine, but the students have nothing to do with them.
The matter is between them and the government. Let them boycott  classes or go on a hunger strike, but it is unfair to play around with valuation. In all other states the lecturers and the governments are very serious about the Plus Two examination process, valuation and results. But in our state no one is held accountable for any problem.

The government is aware that it needs to complete the II PU valuation by April 30 to ensure that students are eligible to appear for various national level admission tests. Over 6.40 lakh students have appeared for the II PU final examination and it could be impossible to complete the valuation in the next 14 to 16 days unless the process is hurried up.

To ensure that the results are announced on time, the lecturers could be asked to evaluate more than the usual number of scripts in a day, making the work erratic. Who will be held responsible if some students get lesser marks as a result? Who will pay for their dreams being dashed?

Indian Oil to set up CBG plant at Tirumala

PM Modi to arrive in Hyderabad, KCR to leave