Chandy took a completely different line from that of the state police chief, who expressed apprehension at Modi’s visit as the police force was already exhausted carrying rescue operations and the Prime Minister’s arrival would mean making extensive preparations for his security.

"The Prime Minister’s visit to the site of the tragedy was great for people. A national leader came to Kerala and that was a big relief for Kerala people.  Their preference and help is great thing for Kerala. We all focus on giving the best treatment to injured people," Chandy said.

According to a report in Indian Express, the Director General of Police of Kerala, TP Senkumar had objected to Modi’s visit to the site of the disaster.

"I did object to the idea of the Prime Minister visiting the region within 12 hours of the accident. I told them it would be better for the PM to visit the spot a day after the disaster. But the PM wanted to visit that day itself. Our entire force had been working from early morning, engaged in rescue and relief work. So much work was still left and all of them were tired because there was no provision of even drinking water. We had to make arrangements for the safety and security of Prime Minister Modi and Congress vice president Rahul Gandhi too," he told the newspaper.

Modi visited Kollam on April 10 and flew there in a navy helicopter where he was received by Chief Minister Chandy and several MPs. 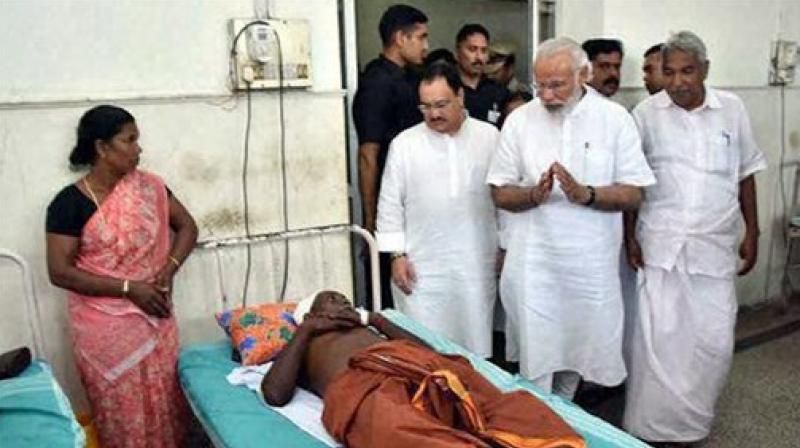 Immediately after reaching there, he went to medical college to see the injured people.

Earlier too, Chandy had said he was thankful to the Prime Minister for coming to Kerala to share their grief. He said he was also grateful to Congress Vice President Rahul Gandhi for visiting Kerala in this hour of grief.

Modi, who termed the incident as "heart-rending" and "shocking", had announced Rs two lakh each as compensation for the next of the kin of the dead and Rs 50,000 each for the injured.

NIA to probe discovery of Pakistan-made bullets in Kerala

Hold it, there's no sona in Sonbhadra