The deal comes with the clause of creating thousands of new jobs in India through offsets. (Photo: PTI)

New Delhi: India is all set to buy fighter jets from the France for 8.8 billion dollars as the two countries have finally narrowed down their differences over the pricing.

According to a report in NDTV, a formal agreement will be signed between the two countries by May-end. Sources said the French have more or less agreed to Indian terms but India would not get the first batch of the French-made fighter planes until at least 18 months.

The Indian side has been negotiating hard to bring down the price of the Rafale deal.

Sources said the price for 36 Rafales, as per the UPA tender, keeping the cost escalation and dollar rate in mind, comes to a little over Rs 65,000 crore. This includes the cost involved in making changes India has sought in the aircraft, including Israeli helmet mounted display and some specific weaponry, among others.

The deal comes with the clause of delivering 50 per cent offsets, creating business worth at least 3 billion Euros for smaller Indian companies and creating thousands of new jobs in India through the offsets. 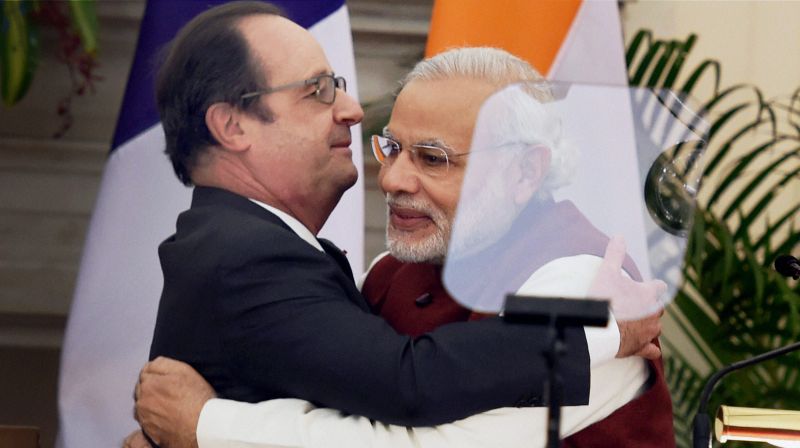 Modi had signed a deal with France in January but said the two countries would sort out the financial aspects later.

In fact, the toughest phase in the negotiations that began in July 2015 - three months after Modi announced in Paris India's plan to purchase 36 Rafale jets - was to get the French to agree to 50 per cent offsets in the deal.

Initially, Dassault Aviation was willing to agree to reinvest only 30 per cent of the value of its contract in Indian entities to meet the offset obligations.

The French side finally agreed to invest 50 per cent of the value following a phone conversation between Modi and Hollande late last year.

The commercial negotiations, as in the pricing of the planes, equipment and other issues, actually began only in mid-January this year.

Under the proposed deal, French companies apart from Dassault Aviation, will provide several aeronautics, electronics and micro-electronics technologies to comply with the offset obligation.

Companies like Safran and Thales will join Dassault in providing state-of-art technologies in stealth, radar, thrust vectoring for missiles and materials for electronics and micro-electronics.

■France pitches for naval version of Rafale
■Rafale deal: France says no to offset, yes to Make in India

IAF objects to some scenes in Gunjan Saxena: The Kargil Girl, writes to CBFC, Netflix

Mysuru literature festival to be virtual series this year

Ahead of I-Day, PM Modi launches a week-long campaign to free India of garbage