Hassan: Twenty nine-year-old H S Chandra , who was killed in a landmine blast triggered by suspected Naxals in the Sukma area of Chattisgarh on Tuesday, had refused to quit his job as a driver with the Central Reserve Police Force (CRPF) and return home to Hassan despite family pressure.

Posted in Chattisgarh for the last four years, he instead told his parents he had only a few more years of his 17 years service left in the CRPF and did not want to quit midway.

His village of Haradoor in Arakalagudu taluk of Hassan is now mourning his passing along with his pregnant wife and parents, Swamy Gowda , a farmer and his mother, Kalamma, who were against him  joining the CRPF and had often appealed to him to quit the job. 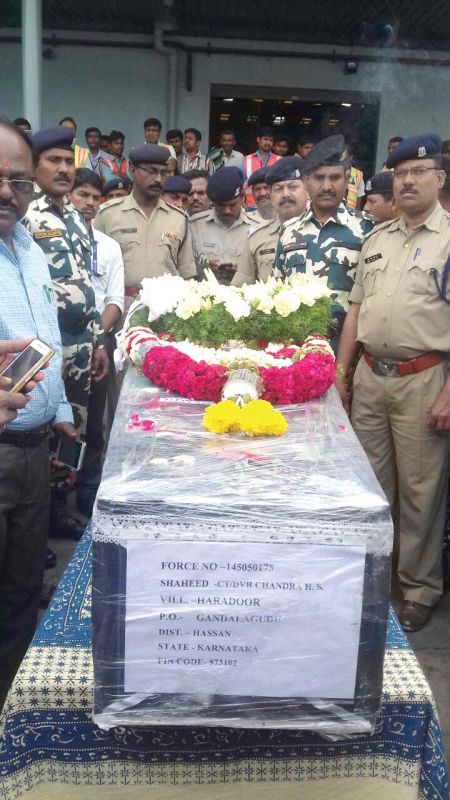 It was after he did his SSLC that Chandra began to learn to drive heavy vehicles and later made it to the CRPF. He married a girl from a  neighbouring village and took her with  him to Chattisgarh. But he left her behind when he returned to the village to attend the house warming ceremony of his brother’s new home and returned to Chattisgarh only to be tragically killed in the landmine blast.

The shock has plunged  Haradnoor village into gloom and villagers are streaming into Chandra’s home to offer their sympathies to his family. His funeral will be held on Thursday after his body is brought to the village from Bengaluru. JDS MLA, H D Revanna and Hassan district in charge Minister, A Manju offered their condolences to his  family.

PM Modi makes surprise visit to Ladakh, says 'era of expansionism is over'

No need to panic about corona, says Tamil Nadu government even as cases increase

With no stipend and faulty PPE kits, Karnataka doctors continue to treat patients

Universities should not conduct exams amid pandemic: Kapil Sibal

Befitting reply given to those who cast evil eye on Indian territory in Ladakh: PM