Who is responsible for biggest bank scam by ‘chhota Modi’: Cong asks PM

Congress communications in-charge Randeep Surejewala said, 'We want to issue a lookout notice against the following people so that these people can't leave the country. There was no risk-management system within the bank.' (Photo: Twitter | ANI)

The Congress said a whistleblower had alerted the government and handed over all the papers regarding Nirav Modi and one of his relatives on July 26, 2016 but the Prime Minister and Finance Minister Arun Jaitley ignored the tip.

Surjewala said whistleblower Hari Prasad had written to the Prime Minister's Office (PMO) in 2016, alerting the government about the "biggest bank loot scam in 70 years" in independent India.

"On July 26, 2016, Narendra Modi was handed with all papers regarding Nirav Modi and one of his relative. It was said that complaint had 42 FIRs. PMO acknowledged the complaint, they also sent registrar of companies to take some action. But in the end the government couldn't do anything," said Surjewala at a press conference in New Delhi.

Surjewala said, ''We want to issue a lookout notice against the following people so that these people can't leave the country. There was no risk-management system within the bank.''

The Congress also alleged that the NDA government was looking the other way when billionaire jeweller Nirav Modi used his clout with the Prime Minister to slip out of the country and steal Rs 12,000 crore, drawing comparison with the case of liquor baron Vijay Mallya.

Surjewala added, "How can Nirav Modi and Mehul Choksi dupe the entire banking system through forged Letters of Understanding (LoU) under the nose of Modi govt? Who is responsible for biggest bank loot scam unleashed by chhota Modi?"

The Congress also asked Prime Minister Narendra Modi and the BJP-led NDA government in the Centre to face the truth and answer questions.

Surjewala also asked the Prime Minister what "chhota Modi" (Nirav Modi) was doing with Narendra Modi at the World Economic Forum (WEF) in Davos in January, 2018. 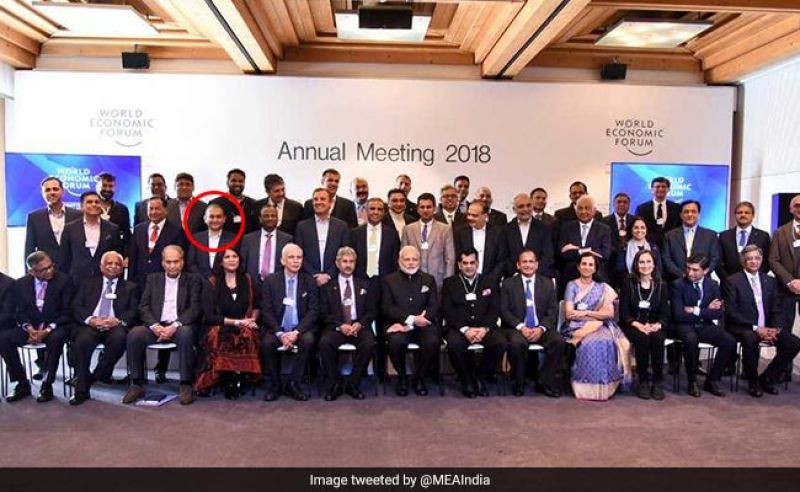 With hashtag #ModiScam, Surjewala in his twitter asked, "Who is Nirav Modi? The new Modi Scam? Was he tipped off like Lalit Modi and Vijay Mallya to escape by someone within the government."

"Has it become the norm for letting people run away with public money? Who is responsible," Surjewala asked in his tweet.

Who is Nirav Modi? The new #ModiScam?

Was he tipped off like Lalit Modi & Vijay Mallya to escape by someone within the Govt?

Has it become the norm for letting people run away with public money?

Congress President Rahul Gandhi also attacked the Narendra Modi government and tweeted: "Guide to looting India by Nirav Modi -- 1. Hug PM Modi 2. Be seen with him in DAVOS. Use that clout to: A. Steal 12,000 crore B. Slip out of the country like Mallya, while the government looks the other way."

Use that clout to:

A. Steal 12,000Cr
B. Slip out of the country like Mallya, while the Govt looks the other way.

In a major jolt to the Indian banking sector, the Central Bureau of Investigation (CBI), on Wednesday, received two complaints from state-owned Punjab National Bank (PNB) against Nirav Modi. The bank said it had detected a USD 1.77 billion (about Rs 11,400 crore) scam where Nirav Modi allegedly acquired fraudulent letters of undertaking from a branch in Mumbai to secure overseas credit from other Indian lenders.

These two complaints come just a few weeks after an alleged fraud of Rs 280 crore was reported against Nirav Modi and others in January. The CBI had registered an FIR in the case on January 31. 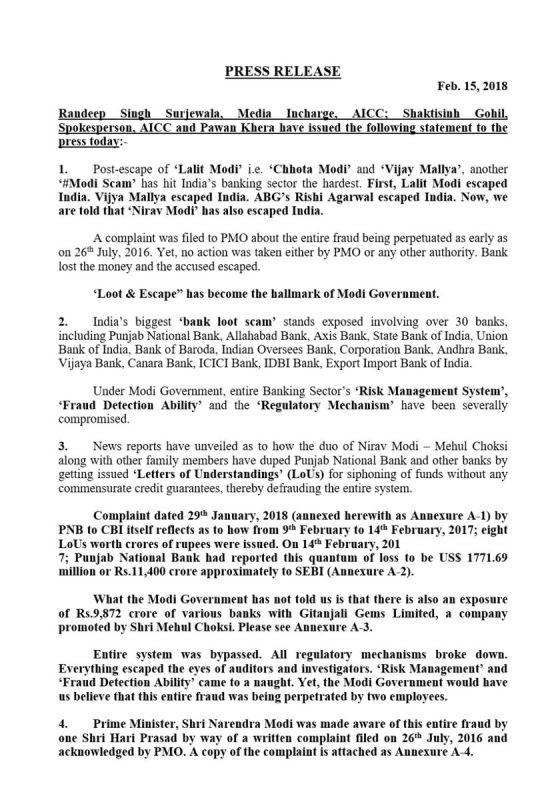 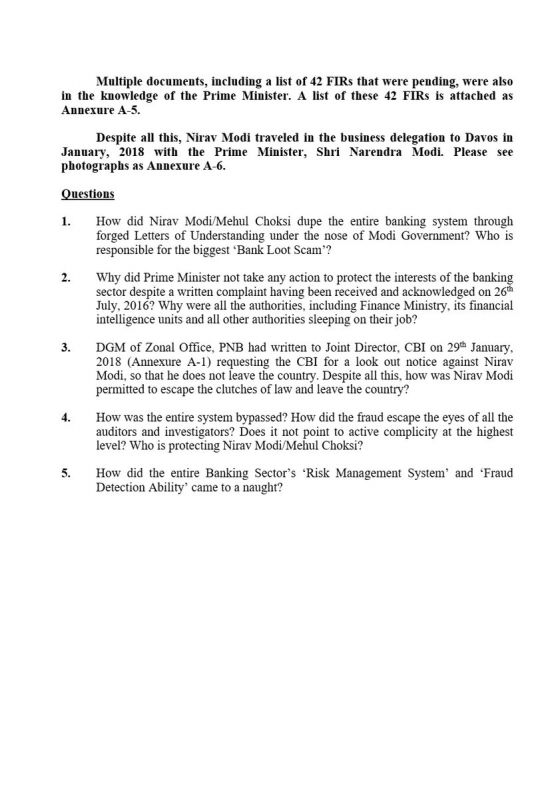