No more banners: Parties to cadres

CHENNAI: The two Dravidian majors, AIADMK and DMK, besides the other parties including AMMK and PMK on Friday asked their party cadres and members not to put up illegal hoardings for long distances on roads or in any other manner that could seriously jeopardize the lives of common citizens.

A day after the tragic death of a 23-year-old Chennai techie, Subhasri, who while returning home on her two-wheeler was run over by a water tanker after being knocked down by a protruding banner on the suburbs on Thursday, and hours after the Madras high court slammed the ruling AIADMK government, particularly its officers for not stopping this practice despite several HC orders banning erection of hoardings and flex banners by all political parties, the political parties came forward to seriously grapple with this issue. The banner in question that led to the mishap here was allegedly placed by a ruling AIADMK party councilor in connection with a family wedding attended by senior party leaders. 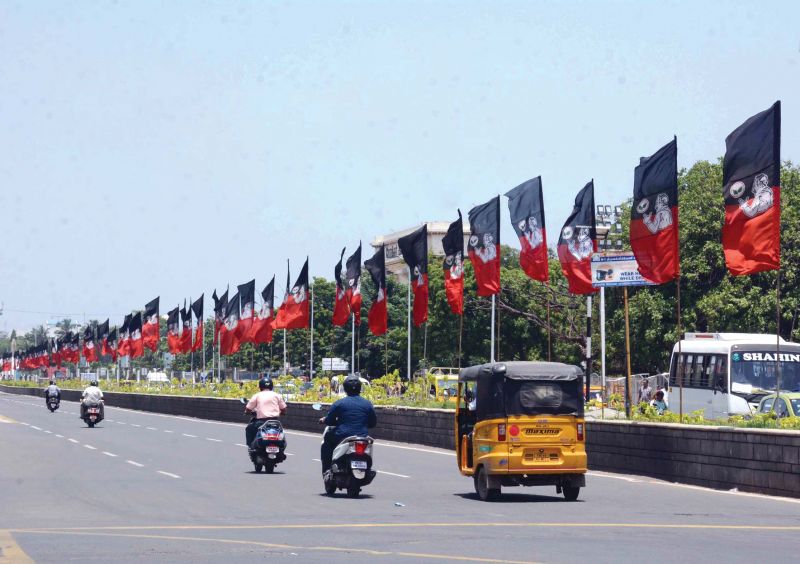 Flags of AIADMK fixed on medians in Chennai. (Photo: DC)

A statement jointly issued by the AIADMK coordinator and Deputy Chief Minister, O. Panneerselvam and party co-coordinator and Chief Minister, Edappadi K Palaniswami, asked its party cadres and functionaries at all levels to completely do away with the practice of placing cutouts, flex boards and banners, “for any reason under any circumstances.”

“We are greatly distressed when we hear the news of people being affected by some actions of a few who are too eager or unaware of consequences or unaware of the rules in place,” the statement said.  Expressing deep pain at the tragedy of a young woman losing her life, the two leaders called upon their cadres “to stop” erecting banners either to welcome leaders or by way seeking to give publicity to an event.

Party cadres should not indulge in any activity that causes any inconvenience or poses hazards to people, they said.

DMK president M. K. Stalin, in a statement, asked party-men and functionaries to “altogether stop” placing of banners and flex boards along roads and streets that inconveniences the public and passing vehicles.

The  Opposition leader warned of stern action if anyone was found going against the party’s diktat. Stalin further said he will not participate in any such function if party cadres were found to violate the party norms.

The DMK leader also hit out at the AIADMK’s ‘banner and cutout culture’ that led to death of a young woman on Thursday.

At most, one or two banners to publicize an event may be kept at a safe distance near the venue after obtaining proper permission, but lining up entire roads with banners was a strict no-no, Mr. Stalin added.