Chennai: Nobel Peace laureate Kailash Satyarthi in a move to promote ‘Child abuse and violence free India’ flagged off Bharat Yatra in Chennai on Wednesday. The yatra, which has entered its third day after being launched in Kanyakumari, will culminate in New Delhi on October 16 covering 11,000 km across 22 states.

Launching the rally, he said, “This march is to transform the fear to fear less, silence to sound and darkness to light where inhibitions are dispelled and constitutional rights are brought in to protect the children.” 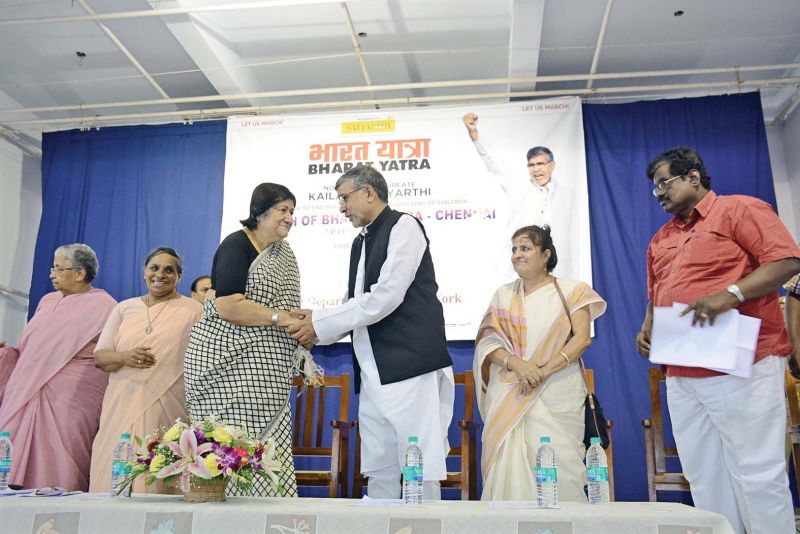 He would be collaborating with NGOs and volunteers across the country to raise a voice against the injustice that the children face daily. The marchers called upon the youth to join the Yatra.

Satyarthi said he would urge the Tamil Nadu government to properly enforce the Protection of Children against Sexual Offences (Pocso) Act.

About 15,000 cases have been registered under the Pocso Act last year, of which four per cent of them were convicted, six per cent acquitted and 90 per cent in pendency. In 2015, the reports were worse, he stated.

Reiterating his mission behind launching the Bharat Yatra, Satyarthi said, ”I am marching because my children are being raped and I refuse to accept that eight children go missing and two are raped each hour. Each time a child is in danger, the whole country is in danger. Bharat Yatra is to make India safe again for our children.”

The organisers said the yatra is the launch of the three-year campaign against child rape and child sexual abuse. It is aimed at increasing awareness and ensuring protection for victims and witnesses during trials.

Accused of violent acts, PFI under govt radar since long

No takers for GHMC’s Bathukamma installation