If Bengalureans thought the rains were difficult, the aftermath promises to be just as full of unpleasant surprises.  Waterlogged roads and pavements are hotbeds for mosquitoes, leading to a sharp rise in dengue and malaria - doctors at a city hospital have treated 35 dengue patients this month alone. The BBMP, which is at the root of the flooding catastrophe, is also required to carry out a mandatory sanitisation of the city, which, of course, it has failed to do. Residents, already counting their losses, are also dealing with tertiary drains near their homes overflowing with contaminated water. Why has the Palike failed to do even the bare minimum this year, ask Chandrashekar G. and Joyeeta Chakravorty.

It has been a wet September for Bengaluru and for some it has been a nightmare with water flooding their localities and entering their homes, causing not just damage to property, but also throwing up the possibility of disease.   Take the people of Ashwini Layout in Koramangala and Anugraha Layout in Kodichikkenahalli, who have faced some of the worst flooding the city has seen in the recent downpour. With the BBMP failing to carry out sanitisation —  a must after flooding — even days later, the tertiary drains near the houses here are brimming with contaminated water.

“We are not able to take the unbearable stench from the drains,” complains Mr S. Sethumadhava, president of the Anugraha Residents’ Welfare Association (RWA). 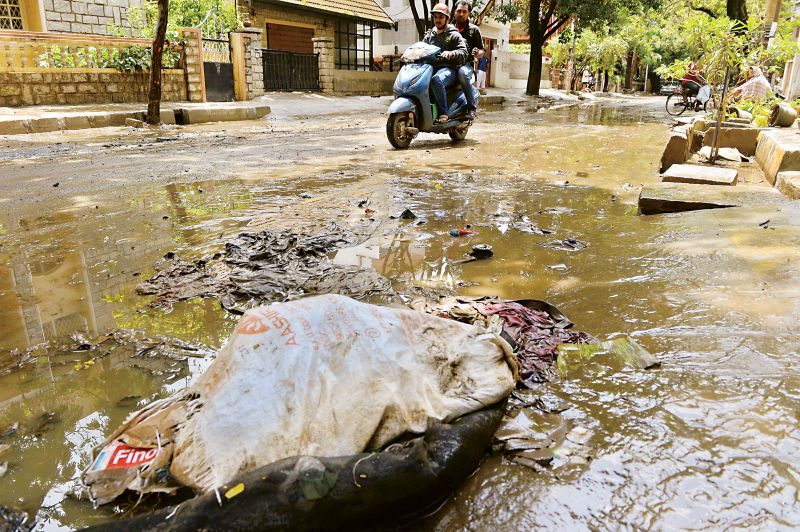 With dengue spreading its tentacles across the city, the recent flooding has made people here even more wary about venturing out in the evenings, when mosquitoes fill the area. Moreover, the locality is  in shambles with the section  between the first to third  main roads of Anugraha Layout almost resembling a refugee camp as people use it to dry  their clothes and wet pieces of furniture. The muck on the road has dried up , making the locality one of the most unhygienic places in the city, says Mr Sethumadhava.

“Normally  flooded houses and their surroundings are sanitised with DDT and by use of mosquito sprays, but this time the BBMP has completely ignored our locality.  When the BBMP has failed to do even what is mandatory  how can people here expect any kind of compensation for the loss they have suffered in the rain?” he demands. 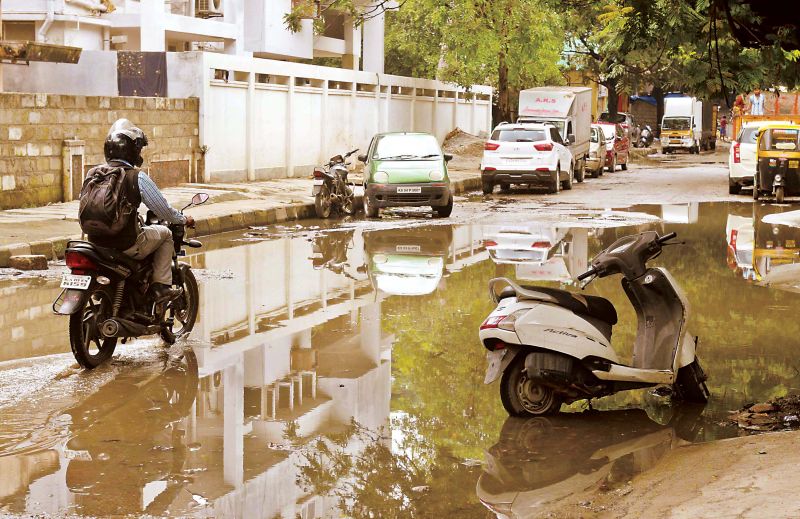 Although  a handful of BBMP workers did arrive to sprayed DDT after a complaint was made, they only targeted one road and ignored the other two, he laments. “But they claim to have sprayed the DDT and mosquito repellent everywhere.  Honest taxpaying citizens are suffering due to such negligence. I have personally suffered a loss of nearly Rs 2 lakh loss due to the flooding. My leather sofa set and other furniture was completely soaked after the water entered our home.  We had to hire a  pump to drain it out. Every time it rains we keep our fingers crossed. Since the drains are still filled with water, even the smallest spell of rain could flood the area,” he adds worriedly. 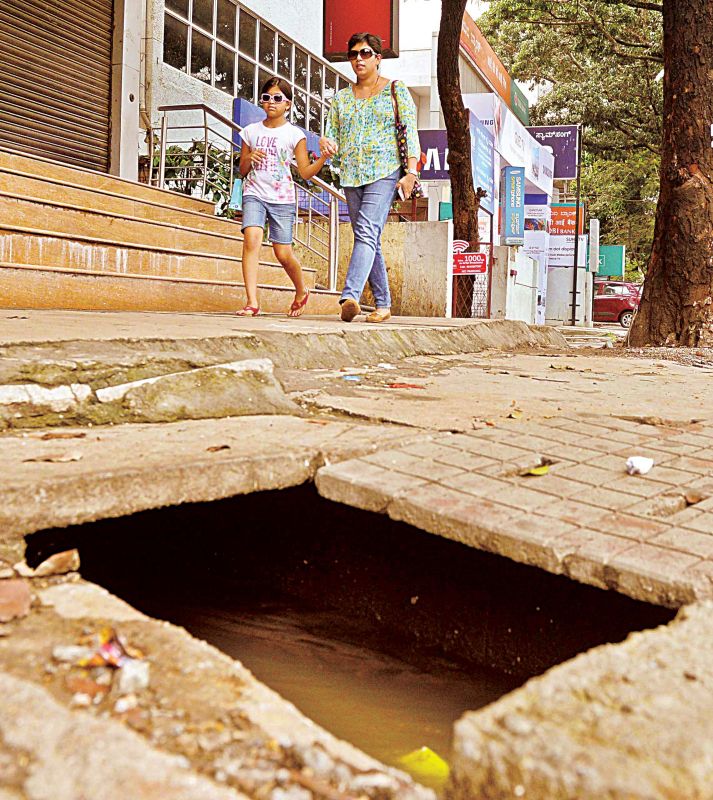 The story  is no different in Ashwini Layout and ST Bed in Koramangala. Secretary of the Forward 68, a federation of RWAs,  Anil Kumar, complains that the BBMP has not bothered to check the condition of the flooded area following the recent downpour. “The people here have been having  a hard time with all the muck collecting on the roads and in drains. Mosquitoes have doubled, making things worse,” he says, regretting that the people  have become victims of both nature's fury and the apathy of the BBMP staff.

Typhoid, malaria, common in waterlogged areas: Dr Sudha Menon, Director, Internal Medicine, Fortis Hospital
The monsoon brings with it a host of seasonal ailments like the mosquito-borne dengue  and chikungunya, water- borne diseases like typhoid and gastroenteritis, and rodent- borne diseases like leptospirosis, Respiratory infections like influenza and H1N1, which are common in winter, are also unfortunately on the rise this season.

As dengue and chikungunya are common in areas with waterlogging, poor infrastructure and faulty drainage systems, the civic authorities need to be proactive about desilting drains, clearing garbage efficiently and educating the public on proper water storage techniques, and also ensure regular fogging.
The negligence and ignorance of the people contribute to  the rising cases of dengue as they tend to downplay the fever and waste time in experimenting with alternative medicines,  leading to loss of crucial time in reaching the right hospital and delayed diagnosis.

At the individual level we need to make use of mosquito repellent sprays around the main doors and ventilators and make sure that our children wear clothes full sleeves and pants to avoid mosquito bites and not  play outside between 5:30 pm to 7pm in the evenings. These are the few precautions that can be taken at the civic and individual level to combat the seasonal ailments. Most importantly, we need to make dengue tests cheaper to help people go in for them when necessary.

This city hospital saw 35 dengue cases in September alone!
The rain of the last few days in Bengaluru has left many people sick thanks to water collecting on dug up roads and in potholes , making them  ideal breeding grounds of mosquitoes. The first 10 days of the month has seen the CV Raman Nagar General Hospital near Indiranagar treat some 3860 patients for viral fever, eye ailments, dengue, chikungunya and asthma.

"The hospital saw some 35 dengue  cases in the first 10 days of September. Cases have increased across the spectrum and it is not just dengue and chikungunya. Respiratory diseases, asthma, acute bouts of wheezing, bronchitis and eye ailments like conjunctivitis have also spiked this month because of the sudden rain,” says Dr John Ebnezar, Medical Superintendent  of the hospital, advising people to take necessary precautions this season to guard against falling sick.

“Fresh water collection has to be stopped as the dengue mosquito breeds in it.  Measures should be taken to prevent it at all cost in the house and in the neighbourhood. Fogging outside the house and use of mosquito repellents and nets  inside are essential," he suggests.

And going by Dr B S Ramu, consultant paediatrician and paediatric intensivist, BGS Gleneagles Global Hospitals, cases of respiratory and vector-borne diseases have also shot up in the city of late. "They walk in with fever, runny nose, headache, vomiting and abdominal pain and we have to give them symptomatic treatment as there is no vaccination available for such conditions," the doctor adds.