Mother of Tabish Bhat,16, whose eye was damaged due to a pellet injury shows his damaged eye as he rests on a hospital bed in Srinagar. (Photo: PTI)

New Delhi: The Centre on Wednesday sent a three-member team of eye specialists from All India Institute of Medical Sciences (AIIMS), New Delhi, to violence-torn Kashmir, where a medical emergency had been declared in many hospitals and doctors are battling a crisis to treat eye injuries many civilians received from pellets during clashes.

Union Health Minister JP Nadda assured the state all possible support and tweeted that his government has “sent a team of senior eye experts/specialists from AIIMS to J&K to assist the State.”

We have sent a team of senior eye experts/specialists from AIIMS to the state of J&K to assist the State. The team has reached Srinagar.

Doctors at a Srinagar hospital said they had to set up a special ophthalmology ward to treat victims and that they have had close to 400 cases of pellet injuries. While some of them received minor injuries to the eye, many suffered permanent damage. 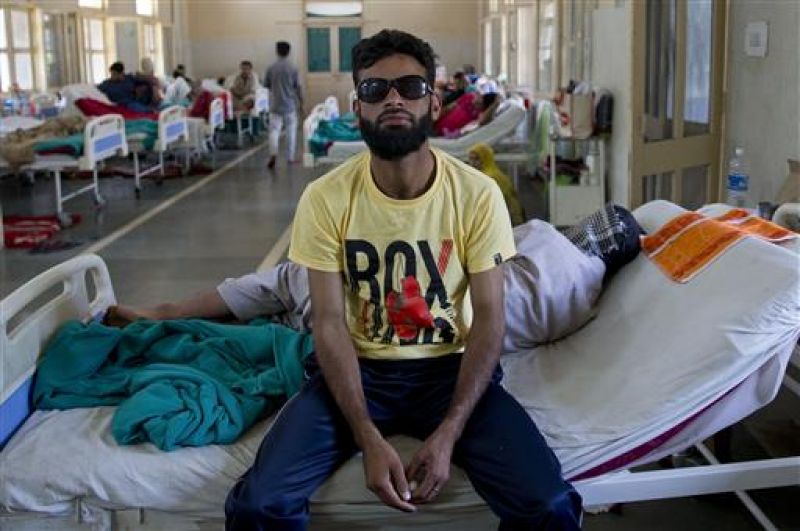 Rayees Ahmed Malik, whose eye was damaged during a protest in the Valley. (Photo: PTI)

Thank you very much @narendramodi ji for responding so quickly to the request I had made just this morning. https://t.co/ajRXl78qg2

Omar had requested Prime Minister Narendra Modi to send specialist doctors to the Valley for treating the injured on Wednesday morning.

"Hon (Honourable) @narendramodi ji. After Kerala fire you carried a plane load of burn specialists with you. Please send eye/trauma specialists to Kashmir," he had said.

Hon @narendramodi ji. After Kerala fire you carried a plane load of burn specialists with you. Please send eye/trauma specialists to Kashmir

Omar had lashed out the BJP-PDP government over the handling of the situation in Kashmir and said they should have rather focused on restoring calm in the Valley.

"Shameless" Government should have been focused on restoring calm and on helping our doctors who are struggling to treat 1200+ injured people, he said.

The injured include SF persons & young boys who risk losing their sight forever. This is the time to reach out with a healing touch.

Omar said the fact that the youngsters have been injured in protests against security forces should not stop the government from giving them best treatment.

"Please don't let the fact that these youngsters people have been injured in protests stop us from giving the best care possible. Thank you jenab," he said.

48 Delta Plus cases detected in India; highest cases in Telangana, 5 other states