The condition of Shujaat Bukhari, editor of Rising Kashmir newspaper, remains critical. He was attacked by terrorists in Srinagar. (Facebook Screengrab/ Shujaat Bukhari)

Srinagar: Senior journalist Shujaat Bukhari has been shot dead by three bike-borne terrorists outside his office in Srinagar.

Shujaat Bukhari, editor and owner of 'Rising Kashmir' (English) and 'Buland Kashmir' (Urdu) was attacked by armed terrorists when he stepped out of his office in Press Enclave in Srinagar city centre Lal Chowk for an Iftar party on Thursday evening.

The journalist and two of his personal security officers were attacked and were rushed to hospital. The senior journalist died on his way to the hospital.

Both the personal security officers also died of their injuries.

"It's a very unfortunate incident. Today at about 7:30 pm when he was coming out of his office and boarding his car, three terrorists came on a motorcycle and opened fire. Two of his PSOs (personal security officers) were also hit and one of them is no more the other is under treatment. They were shot before they could react," Jammu and Kashmir police chief S P Vaid told NDTV.

"They (the terrorists) chose the Iftar time when everybody was rushing home. We will look into who these people are," J&K police chief added. 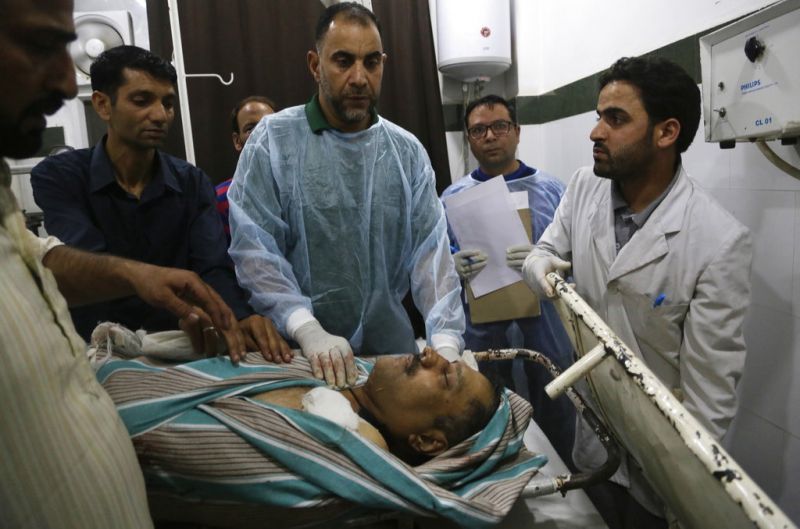 The body of senior journalist Shujaat Bukhari lies inside a police control room in Srinagar, Bukhari and his police bodyguard were shot and killed on Thursday by three bike-borne terrorists. (Photo: AP)

Shujaat Bukhari was given police protection since an attack on him in 2000.

Read: Voice of veteran journalist Shujaat Bukhari silenced, here's who he was

This is the first attack on a journalist in a long time in Kashmir which has been facing severe attacks on civilians and security personnel in the recent past.

Union Home Minister Rajnath Singh tweeted: "Killing of Rising Kashmir editor Shujaat Bukhari is act of cowardice. It is an attempt to silence the saner voices of Kashmir. He was a courageous and fearless journalist. Extremely shocked and pained. My thoughts and prayers are with his bereaved family."

The killing of @RisingKashmir editor, Shujaat Bukhari is an act of cowardice. It is an attempt to silence the saner voices of Kashmir. He was a courageous and fearless journalist. Extremely shocked & pained at his death. My thoughts and prayers are with his bereaved family.

Jammu and Kashmir Chief Minister Mehbooba Mufti and former chief minister of the state tweeted their anguish over the attack on the veteran journalist Shajaat Bukhari.

Shocked & deeply saddened by the sudden demise of Shujaat Bukhari. The scourge of terror has reared its ugly head on the eve of Eid. I strongly condemn this act of mindless violence & pray for his soul to rest in peace. My deepest condolences to his family.

inna lilahi wa inna illahi rajiuun. Shocked beyond words. May Shujaat find place in Jannat & May his loved ones find strength at this difficult time.

Chief Minister Mehbooba Mufti visited the family journalist Shujaat Bukhari. Talking to media, she said: "This is really shocking. He came to meet me a few days back. This is upsetting."

Visuals of CM Mehboob Mufti meeting the family of Shujaat Bukhari, Editor of Rising Kashmir newspaper, who was shot dead by terrorists in Press Colony in in Srinagar city. #JammuAndKashmir pic.twitter.com/jOizsk3J8s

Union Information and Broadcasting Minister Rajyavardhan Singh Rathore called the killing of journalist Shujaat Bukhari "a shameful act". The Union Minister said, "This is a shameful act. Media is free in India. The state government and the central government are committed for the freedom of press in the country and the state."

I’m anguished to hear about the killing of Shujaat Bukhari, editor of @RisingKashmir. He was a brave heart who fought fearlessly for justice and peace in Jammu & Kashmir. My condolences to his family. He will be missed.

Saddened and shocked at the brutal killing of respected editor and senior journalist @bukharishujaat With a few hours to go for Eid this is terrible. No words are enough for this big tragedy

"Press Club of India is shocked and saddened by this mindless terror attack that claimed the life of Shujaat Bukhari in the holy month of Ramzan... [it] shows that lives of journalists are not at all safe. Forces inimical to restoring peace in Kashmir Valley have silenced a voice of reason, logic and peace," Press Club of India said in a statement.

Sources say Rajnath Singh's peace initiative in Kashmir, a ceasefire, may not extend beyond Ramzan, which is expected to end with Eid tomorrow.

National Security Advisor Ajit Doval indicated that the offer was only till Eid.

The ceasefire was seen to trigger a spurt in terror activities in Jammu and Kashmir. Data collected by the Union Home Ministry indicates that terror-related incidents in the Kashmir valley have increased by more than 100 per cent during the holy month of Ramzan.

■Voice of veteran journalist Shujaat Bukhari silenced, here's who he was