Telangana Wakf Board sits on a goldmine, ignores several assets

A picture of the Haj House at Nampally, Hyderabad. The Wakf Board is sitting on several parcels of land which can be developed to earn revenue.

Hyderabad: Several prime properties in Hyderabad that would otherwise have fetched crores to the Telangana State Wakf Board, have been lying vacant for several decades. Though the Board had identified the properties long ago to generate additional income, no concrete steps have been taken so far.

Sources said that the Board has a yearly income of only Rs 5 crore though it has huge tracts of lands in various districts of the state and also prime properties in the capital city. This Rs 5 crore gets exhausted every year for paying salaries to staff and also for maintenance.

As per provisions of the Wakf Act, the Board has an obligation to protect Wakf properties and also maintain them. It also has a statutory obligation to take care of the welfare of destitute, orphans and widows of the Muslim community.

Sources said that currently the Board was giving pensions to a few widows by depending on grants-in-aid from the government every year. Elders of the community say that if the Board develops the properties it has, it will generate crores in revenues every year which in turn would enable it run old-age homes and orphanages, besides giving pensions to Muslim widows. 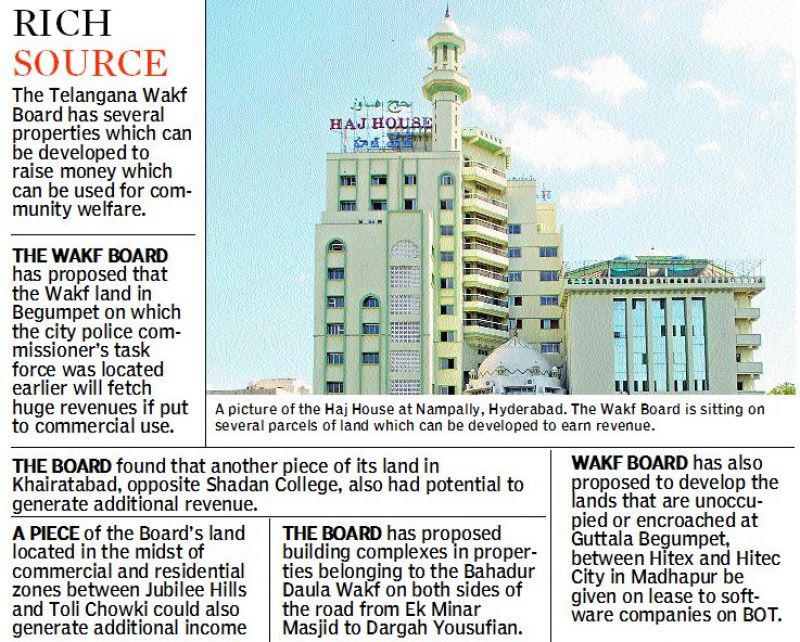 A senior officer in the Board said that there was a provision in the Wakf Act to develop Wakf properties by inviting private players to fetch revenue for the Board.

The relevant provision in the Wakf Act states:  “In case the Board is satisfied that any Wakf property may be developed for the purposes of the Act, it may, after recording the reasons in writing, take up the development of such property through such agency and in such manner as the Board may determine and move a resolution containing a recommendation of development of such Wakf property, which shall be passed by a majority of two-thirds of the total membership of the Board."

Mr Altaf Hyder Rizvi, a former Wakf Board member, said that the Board had constructed a huge complex besides the Haj House long ago without taking a single rupee from the state government. He said that the complex was still lying idle.

When there was an elected committee in the Board before bifurcation of the state, it had decided to rent out the building, but the proposal is still pending with the government. Several other vacant lands of the Board also remain unused, he added.

Wakf proposals lie with state
The TS Wakf Board has identified 26 properties in the city and its surroundings to develop on Build-Operate-and-Transfer basis.

According to Mr Syed Omer Jaleel, special secretary of the minorities’ welfare department, the Board had sent a proposal to the state government for six properties that required immediate attention to generate more revenues for the Board.

He said that as per the Wakf Act, the state government’s approval is mandatory for giving Wakf properties to private parties for development. He said, “Though we had send the proposal long back, the government has been examining all the aspects to avoid unnecessary litigations. Recently we have orally reminded the government about the pending proposal.”