Visakhapatnam: More firsts for Andhra Pradesh this year as the capital Amaravati is now set to be connected to the biggest city in the state, Vizag and port town Kakinada by amphibious aircraft.

Logistics firm Sky Choppers Private Limited will operate the sea planes between Vijayawada (Prakasam Barrage) and Kakinada (Haritha Creek) and Vijayawada and Vizag landing at Bheemili in Vizag city in the first phase from either in September or in October this year. They also planned to operate Vijayawada to Tirupati and heli-tourism in AP for pilgrims.

The journey between Vizag and the capital is expected to be around 70 to 80 minutes while travelling from Kakinada to the capital will take about half-an-hour. 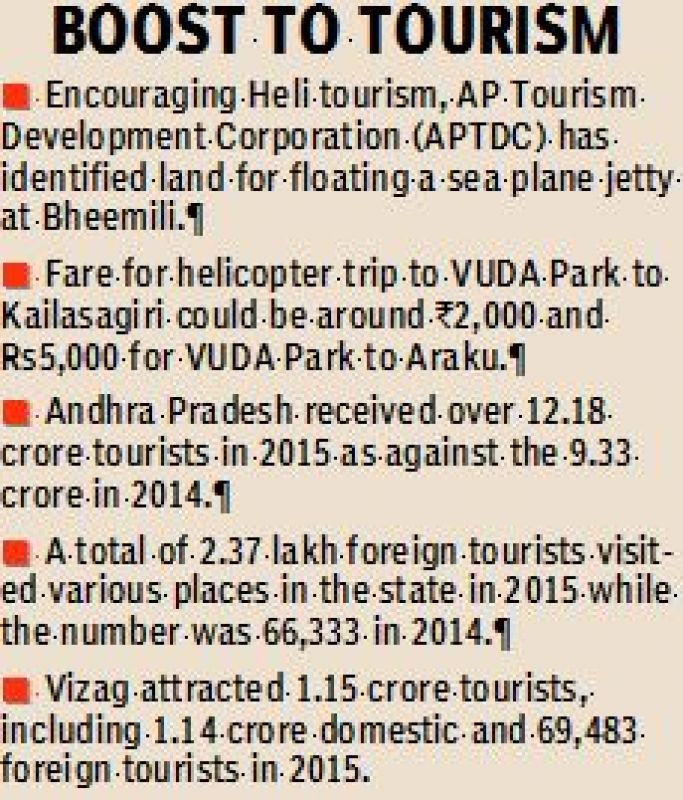 The company, which has experience in transporting pilgrims to sites as Amarnath, Kedarnath and Badrinath, had signed an agreement with the Andhra Pradesh Tourism Department and Visakhapatnam Urban Development Authority (Vuda).

Sources said that Sky Choppers Private Limited had conducted feasibility studies for operation of helicopters to Kailasagiri and Araku following the request of APTDC, which has been chalking out plans to introduce heli-tourism in AP to attract more tourists from other parts of the country.

For construction of three floating jetties for landing and takeoff at Bheemili, Prakasam Barrage and Kakinada at least Rs 4 crore is required.

Dubai-based firm has completed the design work for the floating jetty and APTDC will entrust work order to someone for construction of jetties.

Once the jetties completed, the private chopper will operate its services and the sea plane services will be benefit the businessmen and others.

The fares are tentatively pegged at around Rs 4,000 per head per flight. Vuda has identified land for the helipad for heli tourism in Vizag.

“Once Vuda gives its consent, we will obtain the clearance from the Director General of Civil Aviation (DGCA) for operations. The helicopter ride to Kailasagiri and back from Vuda parks would take around 5 to 7 minutes while the ride to Araku would last for about 15 to 20 minutes. Fare for helicopter trip to Kailasagiri could be around Rs 2,000 and trip to Araku from Vizag is around Rs 5,000,” said C.J. Chandrasekhar of Sky Choppers Private Ltd.

Gender bias in the Army: 'Pretty commanders' and a mindset of ‘just prudence’