DECCAN CHRONICLE.
Published May 14, 2018, 9:44 am IST
Updated May 14, 2018, 7:28 pm IST
Ministry of Home Affairs has sought report from West Bengal govt regarding incidents of violence during Panchayat polls.

West Bengal Panchayat Elections 2018: 20 people were injured in a clash which broke out between two groups in Cooch Behar. (Photo: ANI | Twitter)

Kolkata: As many as 38,529 seats across West Bengal were up for contest on Monday as the voters exercise their franchise in the West Bengal Panchayat Election.

The polls are the last major elections in the state before the 2019 Lok Sabha elections. Political parties have viewed today's poll as a warm up match ahead of the 2019 general elections.

The state has witnessed several incidents of political clashes and violence over the past few weeks.

"What bothers us is 34 per cent candidates have been elected unopposed... Elections to be held in absolute fairness," the Supreme Court had said.

Here are the updates of the West Bengal Panchayat Elections 2018:

07:17 pm: "12 people died, identity of 6 more yet to be ascertained. 3 police personnel also injured. Last year 25 people were killed in the election. Security has been taken care of. We hope rest of the election will pass peacefully," Surajit Kar Purkayastha, West Bengal DGP, said

05:01 pm: Ministry of Home Affairs (MHA) has sought a report from the West Bengal government regarding incidents of violence during Panchayat polls in the state

"There are reports of six people being killed," a state Election Commission official said. However, unconfirmed reports say that 6 to 12 people have been killed in  the violence across state

04:18 pm: “Election has turned into a commotion because no rules were followed. Police could not strengthen the security. That is why we have come here to speak to the Election Commission to find a solution,” Biman Bose, CPI(M) on West Bengal Panchayat Elections

04:17 pm: Members of CPI(M), Revolutionary Socialist Party (RSP) and other parties of the Left Front staging protest outside State Election Commission againt the incidents of violence during the West Bengal Panchayat elections 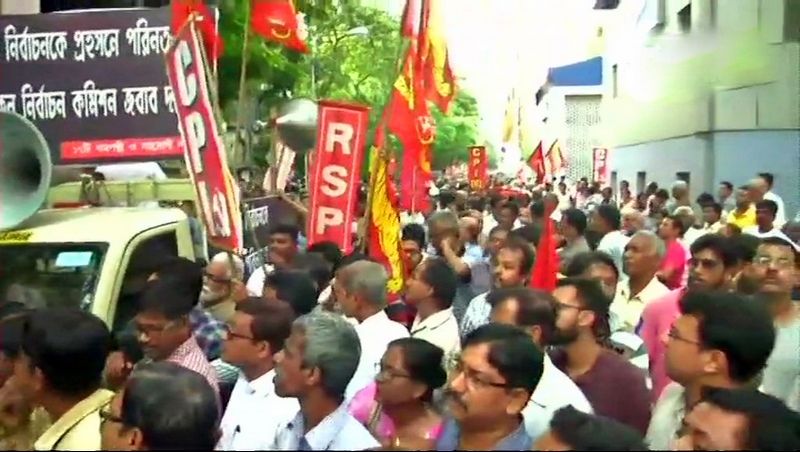 03:38 pm: “This is nothing but complete destruction of democracy. Election Commission is not giving time to political representative. We are organizing a protest against it,” Sitaram Yechury, general secretary, CPI-M said on incidents of violence during West Bengal Panchayat election

03:09 pm: Women queue up to cast their votes at a polling booth in Cooch Behar 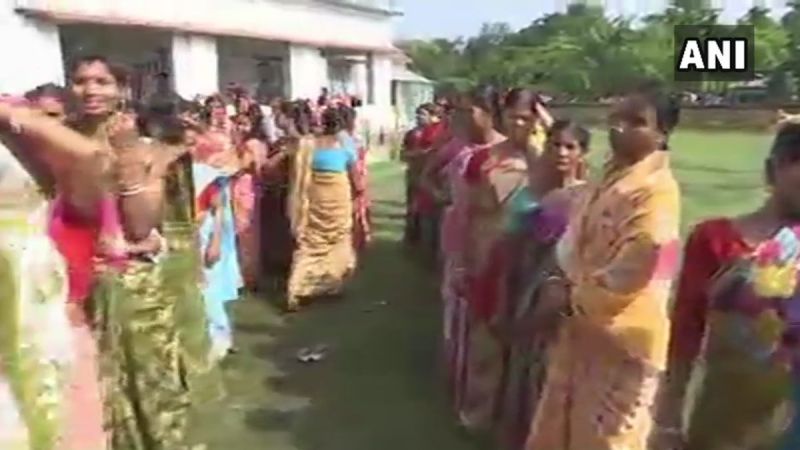 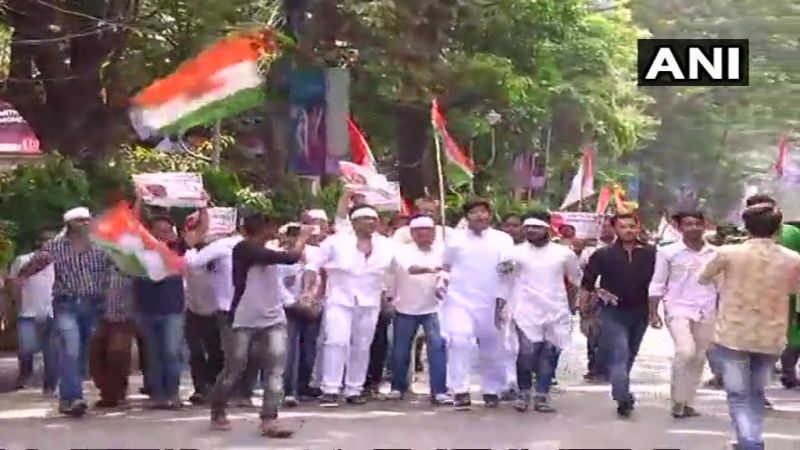 02:27 pm: According to reports, a Trinamool Congress worker was beaten to death in Shantipur, Nadia district while another worker of TMC was killed in South 24 Parganas. One person has died in Murshidabad and another in North 24 Parganas. However, the death toll has still not been confirmed by the police

02:21 pm: Ballot box being retrieved from a pond in West Bengal's Sonadangi 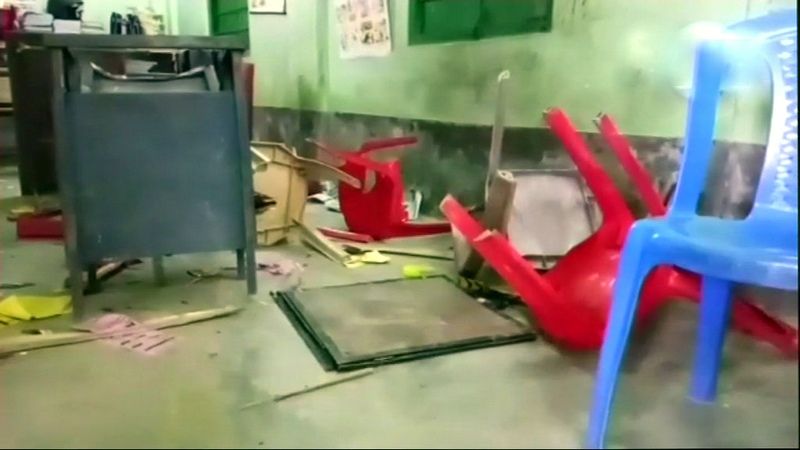 #WATCH:Vehicles vandalised in Raniganj area of Asansol during voting for #PanchayatPolls in #West Bengal. pic.twitter.com/fPVJP1E5Zc

01:05 pm: "There are minor incidents taking place, no major incidents have been reported. Administration is active in places where such clashes have taken place. Voting is being conducted peaceful. I strongly condemn the attack on journalists," TMC's Partha Chatterjee said

12:53 pm: "Not surprised by all the incidents that are happening since morning. Bengal govt is a shameless govt, you cannot expect them to follow any kind of constitutional behaviour. I demand President's Rule in WB," Union Minister Babul Supriyo said on violence during West Benagl Panchayat Election 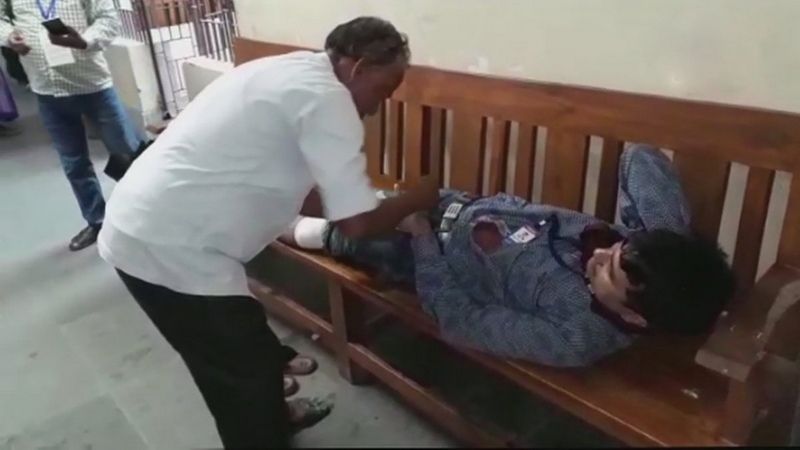 11:45 am: "Highly condemnable and deplorable, it signifies that culture of political violence under TMC has engulfed entire West Bengal and it is an alarming sign for democracy," said BJP leader Sudhanshu Trivedi on violence during West Bengal Panchayat Election 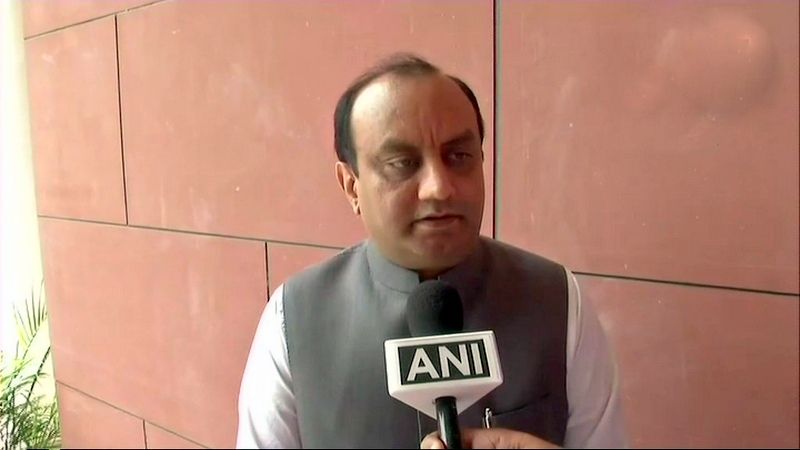 11:43 am: West Bengal Panchayat Elections 2018: At least 20 people have been injured after a crude bomb explosion in Amdanga's Sadhanpur in North 24 Parganas, news agency ANI reported

11:30 am: BJP supporter Sujit Kumar Das, was slapped by West Bengal Minister Rabindra Nath Ghosh at Cooch Behar's booth number 8/12 in presence of the Police. Rabindra Nath Ghosh said, “BJP agent was trying to run away with ballot box, officers caught hold of him but people said let him go. I just drove people away using my hand, that's all. TMC hasn't attacked anyone.”

11:22 am: Ballot papers thrown in a pond after a clash that broke out between Trinamool Congress and BJP in Murshidabad. Following which voting has been stopped for now 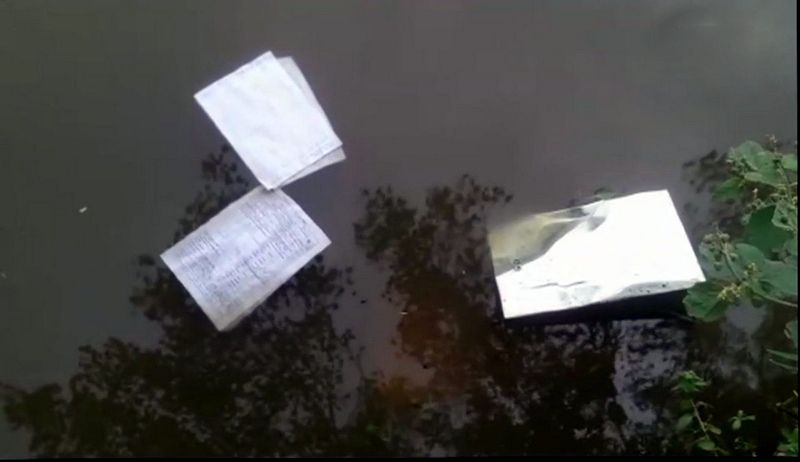 10:48 am: West Bengal Panchayat Elections 2018: BJP candidate from Bilkanda Raju Biswas severely injured after being attacked with a knife, allegedly by Trinamool Congress workers. He is undergoing treatment at Panihati State General Hospital

10:14 am: In Uluberia, Howrah, bombs were hurled at police

10:09 am: One person has been killed in poll violence in West Bengal in Raiganj in North Dinajpur district

10:06 am: 102-year-old woman casts her vote at a polling in Dantan area of West Midnapore 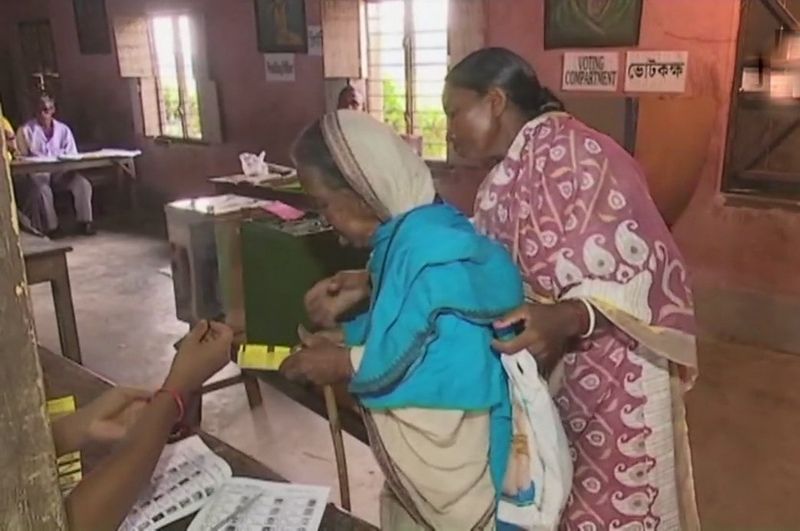 10:03 am: Road blocked by locals in Bhangar. They alleged Trinamool Congress workers of capturing the booth

09:51 am: An independent candidate from Nadia district has been shot dead

09:46 am: Violence reported in Bhangar, a media vehicle has been torched and a camera has also been broken. Media not allowed to enter the area, reports news agency ANI.

09:11 am: CPI(M) worker and his wife charred to death after their house in North 24 Parganas was torched on Sunday night, CPI (M) alleges TMC workers were behind the attack 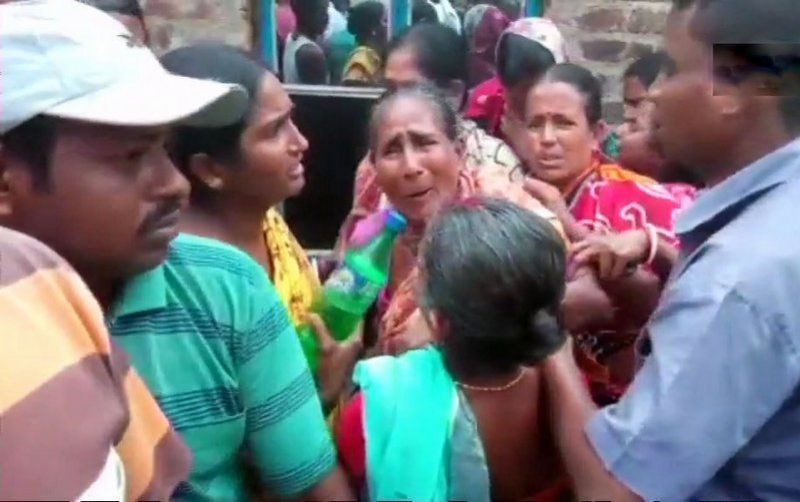 09:10 am: West Bengal Panchayat Elections 2018: 20 people were injured in a clash which broke out between two groups in Cooch Behar. The injured have been taken to MJN hospital for treatment. Locals say, 'We went there to vote but people belonging to TMC attacked us with sticks' 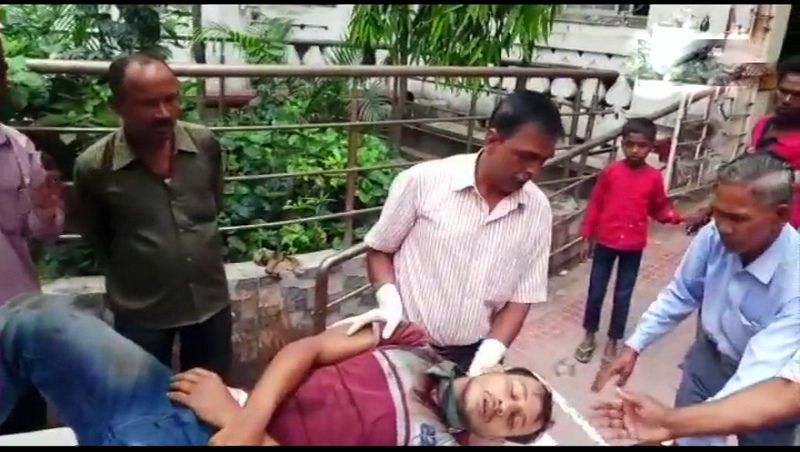 09:09 am: According to reports, a media vehicle was attacked at Bhangar

09:08 am: Within less than two hours after the polling began, the State Election Commission has received complains of violence from at least four districts from different parts the state and has asked the police to take action, SEC officials were quoted as saying by news agency PTI

07:50 am: West Bengal Panchayat Elections 2018: A voter shows inked finger in Cooch Behar. Voting will be held across the state from 7 am to 5 pm 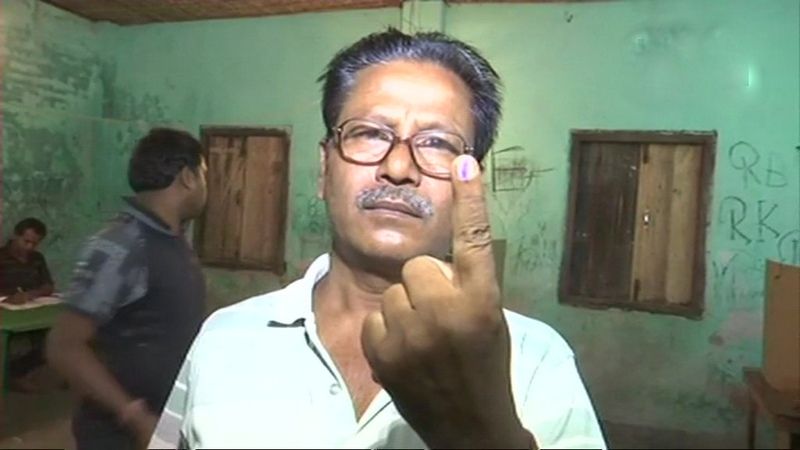 07:12 am: Voters queue up outside the polling booths in West Bengal to cast their vote. Outside a polling booth in Jalpaiguri's Ashighar, voters were seen standing with a umbrella. Several parts of the country on Sunday experienced severe thunderstorm and rains 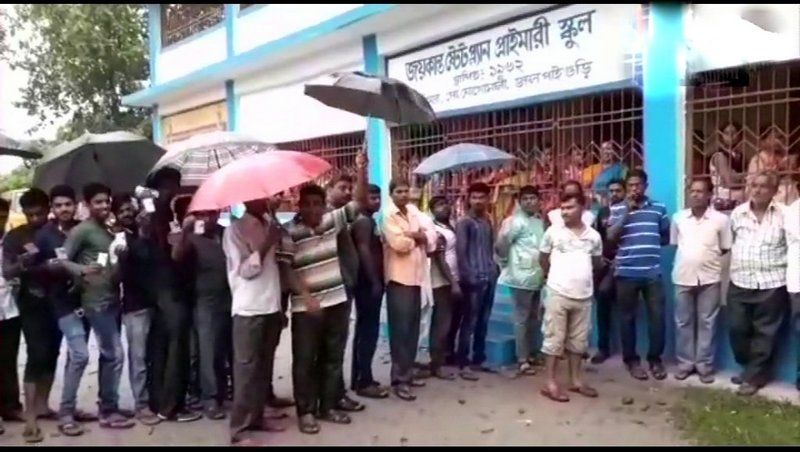 07:09 am: In the run up to West Bengal rural polls, there have been several incidents of sporadic violence across the state. A 30-year-old man was shot dead on Saturday when some gunmen opened fire on a poll rally at Bhangar, 25 km from Kolkata