The royal couple visited the Kaziranga National Park in a jeep safari on Wednesday.

Guwahati: During the Britain's royal couple’s visit to the famous Kaziranga National Park, an adult rhino was killed by poachers who got away with its horn in the park.

Though, it was not known if William and Kate came to know about the crime, the incident has created anguish among the wildlife activists in the state.

The British Royal couple visited the Kaziranga National Park in a jeep safari on Wednesday. 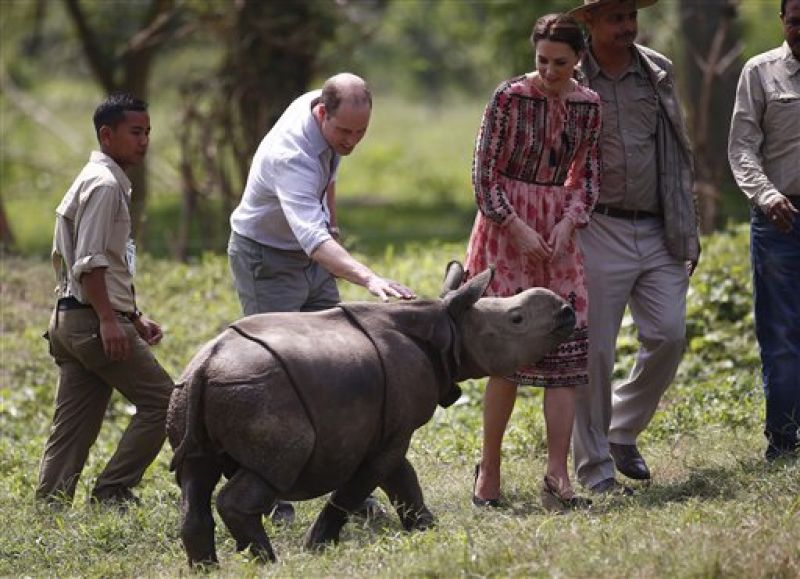 Prince William touches a baby rhino as his wife Kate watches at the Centre for Wildlife Rehabilitation and Conservation (CWRC), at Panbari reserve forest in Kaziranga, in the north-eastern state of Assam. (Photo: AP)

According to forest officials, the forest guards of Botahi Beel forest camp at Burapahar range heard several gunshots on Wednesday night. On hearing the sound, they immediately rushed towards the site and found the carcass of the rhino, while the poachers had fled by then.

It was seventh rhinos poached and killed in the Kaziranga national park in 2016 alone whereas the park lost at least 17 rhinos in 2015.

The incident has come as shocker as state authorities claimed that security in and around the Kaziranga National Park was intensified in view of the visit of the royals couple which on Wednesday also visited IFAW-WTI’s Centre for Wildlife Rehabilitation and Conservation near Kaziranga national Park.

They interacted with the animal keepers and even hand fed some of the orphaned animals being reared at CWRC – elephant calves Buree and Murphuli, just a few months old when they were rescued last October, now being raised on milk formula by their keepers and Dunga, a male rhino, the youngest and newest resident at CWRC and the best of friends with the two female elephant calves. The Duchess was keen on knowing more about the youngest rhino calf at the Centre.

The CWRC, run by the International Fund for Animal Welfare (IFAW) and the Wildlife Trust of India (WTI) with support from the Assam Forest Department, is the only facility in India where orphaned or injured wild animals of several species are hand-raised, treated and subsequently returned to the wild.

It is significant that British royals Prince Williams and Kate Middleton have expressed their desire to extend financial assistance for development and conservation of wildlife sanctuaries in the state, Assam chief minister Tarun Gogoi told reporters on Thursday.

International travellers under surveillance for Omicron

End of an era in Telugu politics

Another Army jawan killed, JCO injured in gunfight with militants in J&K’s Poonch