Will join hands to oust Modi govt: Rahul after Oppn meeting in Delhi

After the meeting, which took place hours after opposition leaders shared a dias at an AAP protest on the day of the last sitting of the present Lok Sabha, Gandhi told reporters that opposition leaders agreed to have a common minimum programme. (Photo: ANI | Twitter)

New Delhi: Moving forward on a united anti-BJP front for the Lok Sabha elections, top opposition leaders on Wednesday agreed to work together to prepare a common minimum programme to oust the Modi government and to consider forging a pre-poll alliance.

The meeting hosted by NCP president Sharad Pawar also saw Congress chief Rahul Gandhi and AAP's Arvind Kejriwal coming together for the first time, while West Bengal Chief Minister Mamata Banerjee and her Andhra Pradesh counterpart N Chandrababu Naidu vowed to work together due to "democratic compulsions to save India".

After the meeting, which took place hours after opposition leaders shared a dias at an AAP protest on the day of the last sitting of the present Lok Sabha, Gandhi told reporters that opposition leaders agreed to have a common minimum programme. 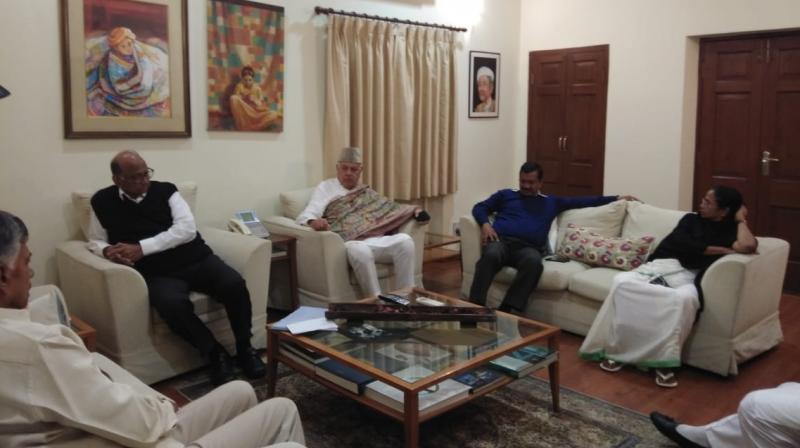 "We will work together to defeat the BJP," he said.

Delhi Chief Minister Kejriwal termed the talks constructive and said the opposition will work together. The meeting indicates that the Congress and the Aam Aadmi Party, who have been bitter rivals since the regional party came to power in Delhi in 2015, may forge a tie-up.

Trinamool Congress president Banerjee called the meeting "fruitful" and asserted that "we will do pre-poll alliance if needed".

Opposition leaders will keep meeting in the coming days for better coordination, she said.

Earlier in the day, she had said, "Any fight with the Congress will remain in the state. At the national level, we will fight together, this I am saying from the heart... For the greater interest of the country, I am ready to sacrifice my life, my party. I am ready to sacrifice everything." Telugu Desam Party head Naidu said there was a democratic compulsion to save India while Farooq Abdullah of the National Conferences termed the meeting "good".