Ulsoor lake: Why can’t we bank on you, BBMP

The Madras Sappers may have the charge of maintaining Ulsoor Lake but its wetlands, which are the BBMP's responsibility, are filled with sewage that pollutes the lake, too. During summer it turns into a breeding ground for mosquitoes and is covered by a carpet of hyacinth. People who live in the area are upset by the lethargy of officials, who claimed to have started work on reviving the lake three years ago. In 2018, the foundation stone was laid for a sewage treatment plant but this remains incomplete.  No visible changes for the better seem to have taken place, reports Aknisree Karthik.

If the city’s Bellandur lake is visibly polluted, sending a toxic white foam into its surroundings, the picturesque Ulsoor lake too has turned ugly at times with dead fish rising to its surface as a result of the contamination of its water. The phenomenon, which was seen twice in a year in 2016, has, however, not woken up the authorities to the lake’s condition.  Garbage from the surrounding areas continues to be dumped into it and untreated sewage regularly flows into it,  polluting its water.

Managed by both the military and the BBMP, the lake is an eyesore and a breeding ground for mosquitoes, that the walkers who use the path around it, dread with the city being no stranger to dengue  and chikungunya.

People, who live around the lake are not surprisingly, upset by the lethargy of the BBMP in clearing the lake of weeds and garbage and keeping its water free of sewage despite the warnings presented by the mass fish kills a couple of years ago. Says Mr Manivannan a resident Ulsoor, "Some three years ago officials claimed to have started work on reviving the lake, but we don’t see any change in its condition. Take a stroll around the lake and you will see that it is in the same condition that it has always been in. Even today you find sewage being let directly into the lake and garbage  dumped in and around it.”

Although the portion of the lake under the control of the military is free from garbage and weeds, the section  maintained by the BBMP reeks of neglect, he regrets. “Clearly it is a matter of being willing to take action. While the military is doing everything to improve the lake, the BBMP and BWSSB, with all their resources, have failed in their duty,” he says.

Another local resident complains that work on building a sewage treatment plant, which began some two years ago, has still not completed. “Our repeated complaints to the officials and politicians have not been addressed,” he grumbles. Ask a senior BBMP official about the lake’s condition and he says the garbage is dumped into it at night and steps will be taken to prevent this. But considering that the civic agency has done nothing about it until now despite clearly being aware of the problem, doesn’t say much  about its commitment to the job. The lake, like other parts of the city, therefore continues to remain a victim of official apathy and the poor civic sense of its people. 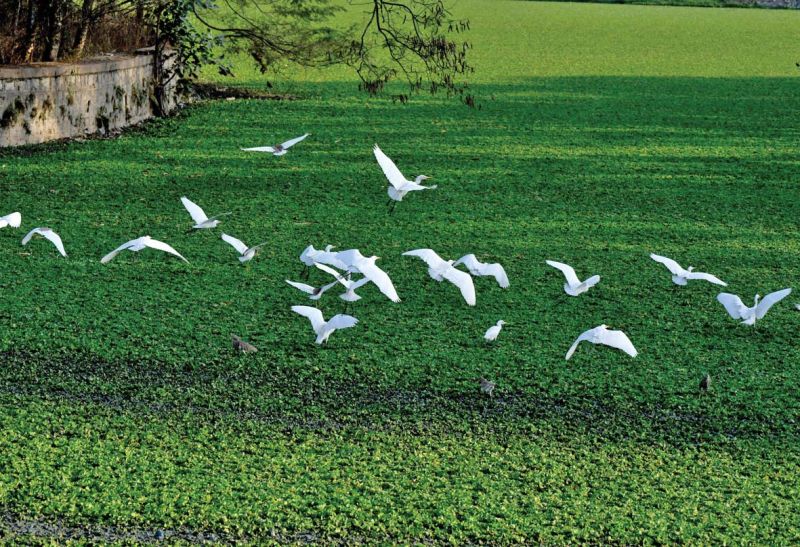 Lake’s arteries and veins need to be cleaned regularly
Located in the heart of the city , Ulsoor lake has all the potential to become a big centre of attraction for locals and tourists alike. But sadly, the government has done little to encourage water sports or even boating as a leisure activity on the lake.

Noting that the military currently uses the lake for its training, and its  personnel are often seen boating and swimming in it, a local Ulsoor resident feels the lake could instead become a good tourist spot offering water games if properly developed.

Mr Ram Prasad, co-founder of Friends of Lakes agrees that lakes can turn into tourist attractions, but underlines that the step should be taken in consultation with those who use them regularly like walkers, farmers, and fishermen.  He also stresses the importance of protecting the ecology of these water bodies first.

"The arteries and veins, which keep a lake alive, should be free of pollution and carry fully treated sewage or rain water. The health of the lake should be monitored regularly by lake user groups  and importance given to its holistic  development with priority being given to its environment,  hydrogeology, and liminology,” he says.

■Guest Column: Wetlands maintained by BBMP are full of sewage