Chennai: The DMK and the Congress on Saturday joined hands to take on the AIADMK in the coming Assembly elections in Tamil Nadu.

The DMK appears to have agreed to share power should its alliance win the elections. This is a significant departure from the hard-held position by the Dravidian major that the people of Tamil Nadu would never accept a coalition.

“The Congress will be part of the DMK alliance to face the Assembly elections. The alliance will be successful and form the government. If more parties join, it (alliance) will be invincible,” Congress lea-der Ghulam Nabi Azad told reporters outside DMK chief M. Karunanidhi’s Gopalapuram house, after meeting the 92-year-old Dravidian stalwart. 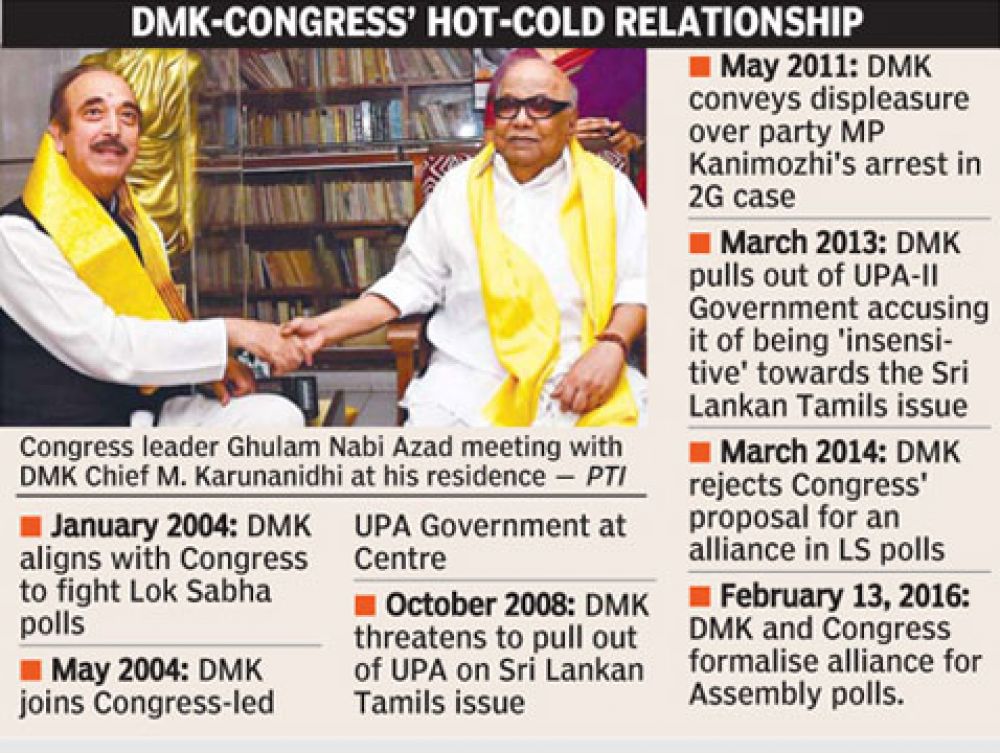 DMK to take call on more allies
After meeting DMK chief M. Karunanidhi, Congress leader Ghulam Nabi Azad said, “First of all, our goal is that DMK-led government is put in place,” triggering excitement among the mediapersons who pressed for details whether it would be a coalition government and if so, how many ministers the Congress had now bargained for.

The leader of Opposition in Rajya Sabha heaped praises on Karunanidhi and DMK, calling him an “esteemed leader” and describing the party as “most dependable.”

Karunanidhi was an “esteemed leader” since the times of Indira Gandhi and Rajiv Gandhi, he said, adding that “the DMK has always been and shall remain a most dependable partner.”

Asked what had changed between 2013 and 2016 for the two to join hands again, Mr Azad said there were political “compulsions and pressures.”

On if any other party will join the alliance, he said it would be left to the DMK to bring in more allies. The DMK, he said, “is the principal party and principal ally under whose leadership the elections are fought. The decision is left to the DMK leadership. They are sitting here. They know that who are the potential parties who can be roped in.”

Commenting on the development, political analyst A. Marx said, “The term DMK-led government means that the Congress will be given a few ministerial berths. While the Congress, after its electoral losses and party-split here, desperately needs a share in power to retain its cadre and supporters in this state, the DMK remains isolated as no party is willing to join hands with it without the assurance of sharing power. And so the DMK has no option except to accept a coalition government.”

Commenting on the development, political analyst A. Marx said, “The term DMK-led government means that the Congress will be given a few ministerial berths. While the Congress, after its electoral losses and party-split here, desperately needs a share in power to retain its cadre and supporters in this state, the DMK too remains.”