EPFO is one of the largest social security providers in the world having coverage of 9.26 lakh establishments with more than 4.5 crore members.

Chennai: Employees in the private sector are making a beeline to the Employees Provident Fund Organisation office to withdraw their provident fund. Post introduction of the online facility in the PF withdrawal procedure, over 50 per cent of claims in Chennai and 70 per cent in Puducherry, have been submitted online.

The online application procedure was introduced in June 2017, and so far 4,34,261 online claims have been settled in Tamil Nadu and Puducherry.  As the process has been simplified, employees tend to withdraw amount from their provident fund account frequently, for various purposes.

The EPFO caters to the needs of 85,043 establishments comprising of 55,35,371 contributing members in Tamil Nadu and Puducherry. With an intention of providing hassle-free service to employers and members, several new initiatives have been introduced in the service.

The EPFO has also set a target to be transformed into an ‘electronic, paper-free organisation’ soon. Already, the EPFO has simplified major procedures enabling members to access various services online. Besides curtailing inspection raj, tedious paper work had been reduced drastically.

The EPFO, through its journey of 66 years, has today become a reliable arm of the Central Government in social security services for employees. Beginning its journey with a few lakh beneficiaries, it now services more than 4.5 crore contributing work force, engaged in around six lakh contributing establishments in the country. The ogranisation operates three schemes — EPF Scheme 1952, Pension Scheme 1995 (EPS) and Insurance Scheme 1976 (EDLI). EPFO is one of the World’s largest Social Security Organisations in terms of clientele and volume of financial transactions undertaken.

Additional Central Provident Fund Commissioner, Employees’ Provident Organisation, Chennai, K.V. Sarveswaran has appealed to members not to opt for premature withdrawal of the PF amount. Speaking to Deccan Chronicle, Sarveswaran said, the EPFO has been continuously improving its services and procedures and introduced number of e-initiatives to provide timely information and services to all its stakeholders in tune with the government’s motto of minimum government and maximum governance. 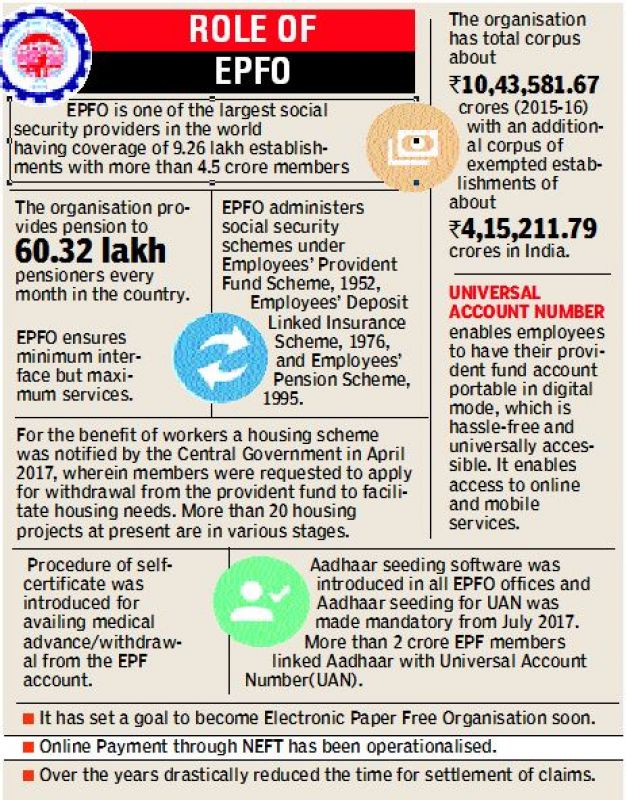 Recent e-governance initiatives of online facility backed by Universal Account Number has generated a huge trust in public service delivery. Online claims are being settled in five days time after receipt of application.

Sarveswaran said that premature withdrawal denies continuity in service, which deprives them the benefit of pension, where the very purpose of providing social security at old age through EPFO, is rendered futile. Members are requested, in their own interest, not to withdraw their provident fund at the time of leaving one establishment and joining another establishment rather transfer their account, so that the service already rendered will be carried forward, he added.

Provident fund amount can be withdrawn for specified purposes like marriage, education, purchase of house, construction of house etc., which may be utilised on genuine grounds and in case of emergency. Provident fund members are also eligible for payment of pension, if they have at least 10 years contributory service.

Pensioners must be aware of submitting life certificate to the concerned authority to receive pension without interruption. Sarveswaran said, of the 4,81,769 pensioners who are drawing pension in Tamil Nadu and Puducherry, 42,324 have not submitted their life certificates.