Restoration works in progress at the former British Residency at Koti in Hyderabad. The building was constructed between 1803 and 1805. (Photo: DC)

Hyderabad: The 211-year-old former British Residency mansion at Koti in the city will get back its past glory soon. While the famed Darbar Hall of the imposing building complex is now structurally safe after repairs in the first phase, work on other structures is in full swing.

The former British Residency building site was once Embassy of East India Company to the court of Nizam of Hyderabad and residence of James Kirkpatrick, the British Resident, as well as his successors.

Within its compound there were several quarters, including a Zenana (women’s quarters), where Khairu-nnissa, wife of Kirkpatrick lived with a miniature model of the building. Legend has it that Kirkpatrick’s wife, who remained in purdah, could see the entire mansion, including the court yard.

The scale model has been restored. “British Residency was constructed between 1803 and 1805. There was water leakage from the roof and wood work had developed cracks. The building is made of lime, brick, Madras Terrace, stone etc. We have taken up restoration work. Darbar Hall is now structurally safe. So far we have spent about Rs 2 crore,” Sharat Chandra, a consultant for the project told Deccan Chronicle. 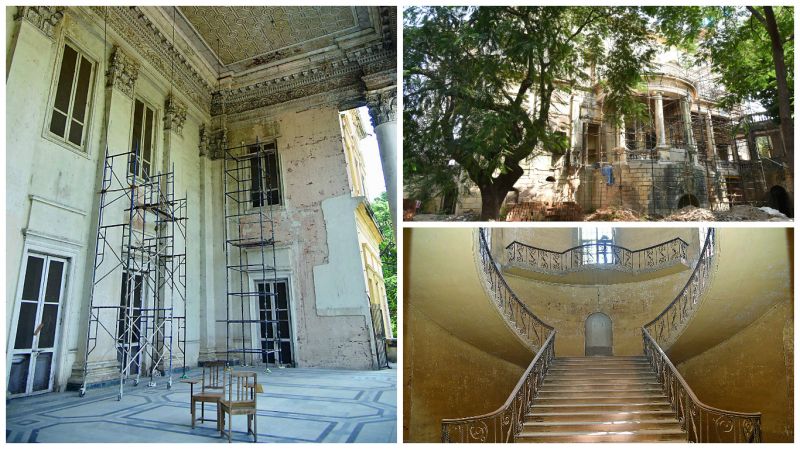 Another view of the restoration works at the former British Residency at Koti in Hyderabad. (Photo: DC)

He added, “It was quite a tough job. We did a detailed study of each and every aspect of the building and then took up the work. We prepared the right mix of materials available locally. It’s quite a rigorous process,” he said.

The total plinth area of Darbar Hall block is 9500 sq.mtrs and the entire complex spans 50,000 sq.mtrs. Osmania University took up the conservation work in collaboration with World Monuments Fund (WMF), National Culture Fund of Union Ministry of Culture and the State Department of Archaeology and Museums.

According to Sharat Chandra, it would take three to four years to restore the entire complex, depending on funding. It is estimated to cost about Rs 17 crore.

“Once restored, the University College for Women will not only enrich the quality of women’s education but will also be a cultural asset in the heart of Hyderabad city” said Raheem Shah Ali.

Constructed in the year 1803 by the British and later converted into Osmania University College for Women in 1949, the vast campus is spread over 42 acres (originally 60 acres). Due to the vagaries of nature, neglect and shortage of funds, the aging building suffered much damage.

A part of the ceiling had collapsed, rain water seeped in and the wood work was being destroyed by termite action.

After a court directive to Archaeological Survey of India (ASI), it is now a protected monument under the control of Telangana State Department of Archaeology and Museums.