When Bengaluru resounded to cries of ‘Nanoo Gauri’

Writers, thinkers, activists and people from all walks of life take part in the “Rally for Resistance”, condemning the killing of journalist and activist Gauri Lankesh, as they march towards Central College Grounds, in Bengaluru on Tuesday. (Photo: R. Samuel)

“We are Gauri!” Angry cries rent the air as a sea of protestors converged on Central College Grounds on Tuesday morning. The event was to become one of the largest non-political gatherings of its kinds in recent history. Writers, rationalists, scholars, academicians and journalists joined a crowd over 20,000 supporters of journalist Gauri Lankesh, who was shot by unknown assailants on September 5.

Hundreds thronged K.S.R. railway station on Tuesday morning as students from Christ University, National Law School of India University and St. Joseph’s College joined a rally of AAP workers with the “We are Gauri” refrain, as criticisms against right wing elements, largely suspected to be behind the killing, swelled to a clamour. Social activists Medha Patkar and Kavita Krishnan fuelled the enthusiasm of the marching rally. “Sanatan Bharat has been spewing venom against progressive thinkers on their website,” cried Patkar. “In fact, they’re even more venomous than the RSS. Why aren’t they being questioned?"

‘Hinduism’ is a very liberal, tolerant concept while Hindutva is casteist and communal. The followers of Hindutva do not hesitate to preach violence. We must condemn them and their concept of Veer Sawarkar, which looks at Islam and Christianity with hatred
— Swami Agnivesh 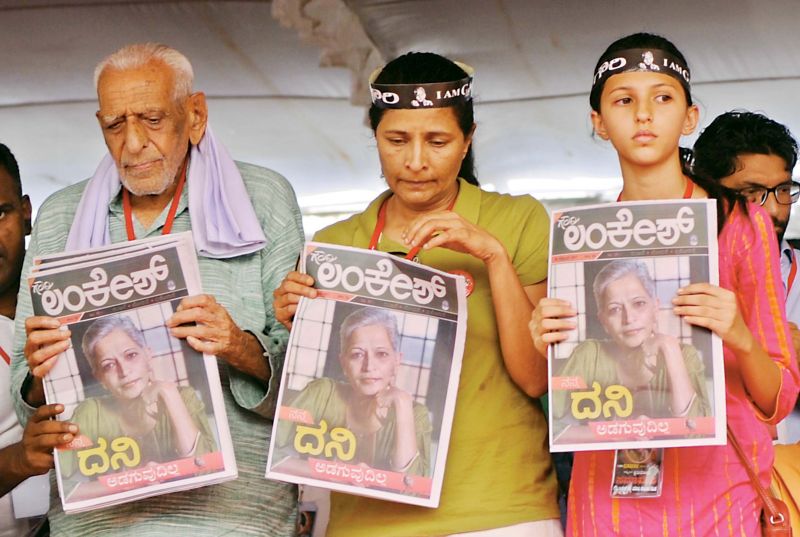 Freedom fighter H.S. Doreswamy stands with Kavitha Lankesh and her daughter during Rally for Resistance in Bengaluru on Tuesday. (Photo: R. Samuel)

A stream of notables joined the resistance meeting at the venue, including CPI(M) General Secretary Sitaram Yechury, lawyer-activist Prashant Bhushan, Swami Agnivesh, documentary filmmakers Rakesh Sharma and Anand Patwardhan, to name a few. #IamGauri, a commemorative edition of Gauri Lankesh Patrike was released at the resistance event. #IAmGauri began to trend once more on social media as videos of the meet were uploaded on various platforms. 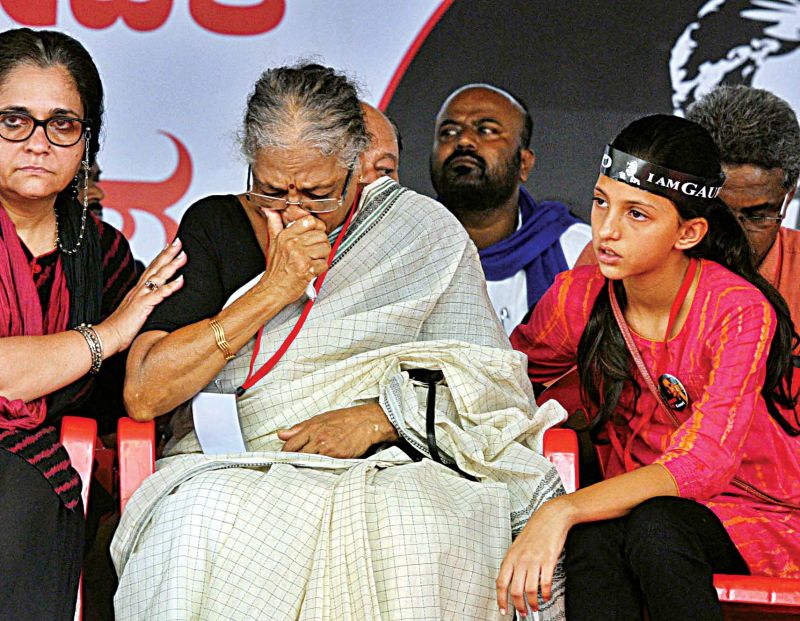 It was Dalit activist Jignesh Mewani, however, who stole the show. The youth-leader’s power packed speech was delivered amidst deafening applause. Mincing no words in his criticicism of PM Narendra Modi, Mewani demanded, “Why is the PM following the trolls who abused women journalists, including Ms Lankesh’s death, on Twitter,” he said, adding, From this stage, I want to promise that I will fight, until my last breath, for the secular, pluralistic and democratic values of this country.”

They were so afraid of Gauri Lankesh’s voice that they killed her. They want to replace democratic values of India with their Hindutva agenda. She was straightforward, which resulted in her demise. The killings of Ms. Lankesh, Govind Pansare, Narendra Dabholkar and MM Kalburgi are unacceptable. Asssassinations, mob lynchings of Dalits and Muslims conducted by Gau Rakshaks in many parts of the country with vigilantes telling people what to eat and how to dress say a lot about the current regime
— Sitaram Yechury 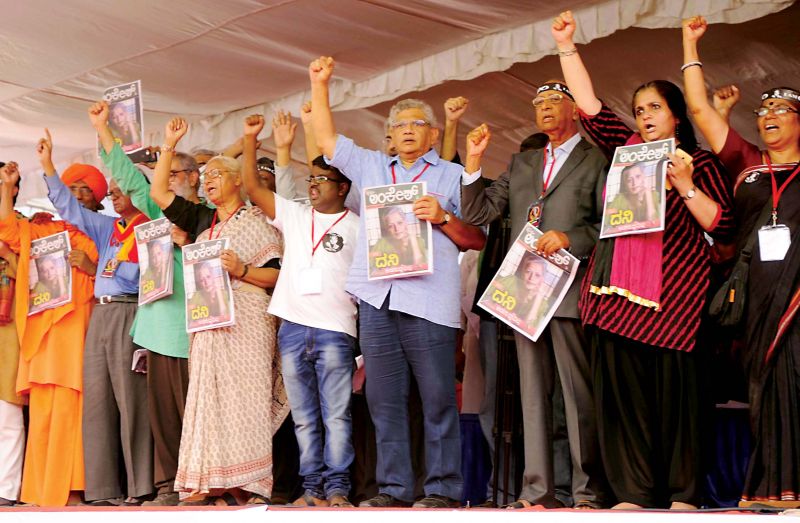 ‘Speaking out should not mean receiving bullets’: Sitaram Yechury
“This is only the beginning,” said Sitaram Yechury, Communist Party of India (Marxist) General Secretary, to a chorus of cheers from his exuberant audience. The first victim of Hindutva terror was Gandhi, who also dreamed of a secular India. The diversity of the country can only co-exist only with equal opportunities to discuss, speak, express oneself and to disagree. This should not put one at the receiving end of bullets.”

Undaunted by the scorching heat, Rally for Resistance, which took place at the Central College campus here in Bengaluru saw over 20,000 protestors, all decrying the death of noted journalist Gauri Lankesh and condemning the “atmosphere of intolerance” that has arisen as a consequence. “These acts,” pointed out Yechury, “Are only carried out by those who had opposed the idea of a secular and democratic India during the Freedom Struggle and demanded a Hindu Rashtra instead.” 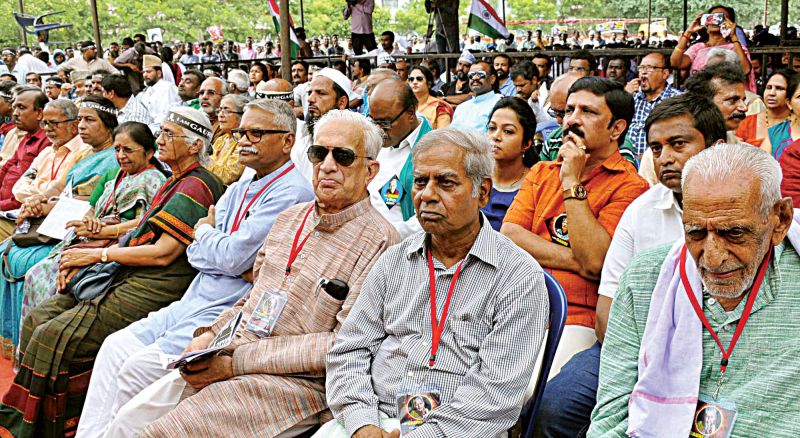 Various journalists including Ravish Kumar and I are on the fundamentalist hit list. Why shouldn’t journalists report facts? We are being widely opposed as a community and I’m here today in my capacity as a journalist. I feel bad for Gauri Lankesh
— Sagarika Ghose

Activist Medha Patkar, who led the students’ rally with aplomb, said, “Gauri had effectively turned her pen into a weapon. Those she spoke against were afraid, that’s why they gunned her down, to serve as a lesson to the rest. Historian Ramachandra Guha who also spoke his mind, was served a legal notice. Let them send 1.2 billion legal notices!” Appreciating the government’s efforts in forming an SIT to nab Lankesh’s killers, Patkar added that the government has failed to arrest the assassins of M.M. Kalburgi even two years after his death.
It was perhaps the noted poet and playwright Chandrashekhar Patil who summed it up best, paying tribute to Lankesh with a poem: ‘Where they do go, the dead ones? They don’t go anywhere….’

We don’t know who killed Gauri Lankesh but we do know who is celebrating her death. Violence and vulgar threats are encouraged by the ruling party, including the Prime Minister himself, for he invites these trolls to tea parties. I am happy that people have gathered in such large numbers. It means we are going to fight this culture of violence
— Prashant Bhushan 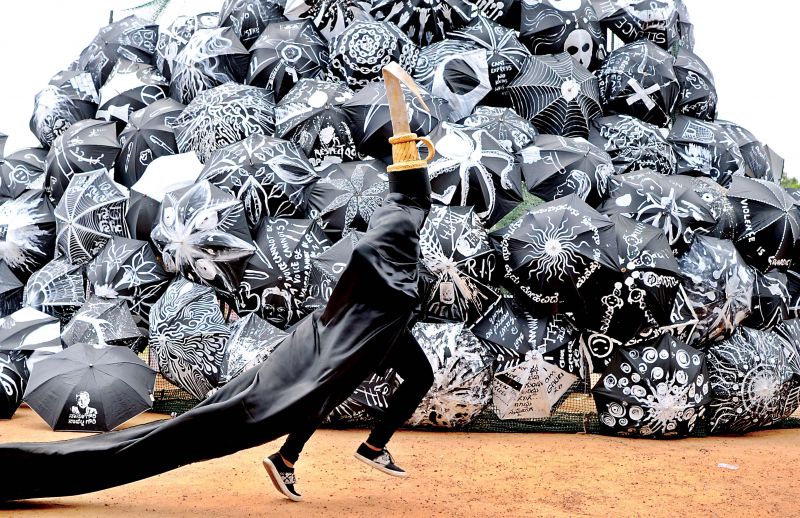 We’re here in support of Gauri, safe to say we aren’t behind her death: Naxal sympathiser
The Naxal angle that emerged soon after the gunning down of senior journalist/ activist, Gauri Lankesh, did not appear to hold up on Tuesday as over 400 Maoist sympathisers from across the state and neighbouring Andhra Pradesh took charge of the  massive rally, “ I am Gauri” held in the city to protest her death.

Speaking to the Deccan Chronicle, a senior Naxal/Maoist sympathiser from Andhra Pradesh, contended that the overwhelming presence of Naxal sympathisers at the event was itself an indication that the ultras could not have murdered Ms Lankesh. "It is not that Naxals have not gunned down someone in the past or will not do so in future. They will certainly do so if they feel their target is worthy of it. But they usually  target big names, who can grab national and international headlines. They last conducted such an operation on the then united Andhra Pradesh Chief Minister, Chandrababu Naidu almost a decade ago," he said.

Besides, Naxals don’t stay quiet once they had attacked their target, whether succcessfully or not, and lost no time in claiming credit for it and releasing a “chargesheet” against the object of their ire, he observed. “They would also issue a warning to their target. In Gauri's case you see Naxal sympathisers at the forefront of the 'I am Gauri' protest rally. So it can be safely construed that Naxals aren’t behind this attack," he asserted.

The murder of Gauri Lankesh was to terrorize all those who speak against the government. They cannot stifle everyone’s voice
— Anand Patwardhan

Hindutva agenda belongs in the gutter: Dalit leader Jignesh Mevani
Lambasting PM Modi for following trolls and not being able to expedite trials against the killers of MM Kalburgi and Govind Pansare, Jignesh Mevani, leader of the militant Dalit movement in Gujarat said, “This is for the first time we have encountered a PM who follows abusive trolls on Twitter. A member of the Sangh Parivar talked about raping the dead bodies of a particular community in the presence of CM Yogi Adityanath.”

March to Delhi he said, in an appeal to the citizens of Bengaluru. “Question the PM’s development model for it has journalists feeling so threatened. The only question on the tips of their tongues is, ‘Who’s next’?”

As the crowds chanted “Modi, shame, shame,”  Mevani said that fascist attempts to silence dissenters have failed. “Despite the attempts by Mohan Bhagwat, PM Modi and sanatan sanstha the massive turnout at the protest signals that their attempts to stifle the voices have failed. We have to march in huge numbers to Delhi and tell the PM that his Hindutva agenda belongs in the gutter.”

Referring to the emergency, the Dalit leader went on to say that independent India hasn’t seen a day like this, when the average citizen is scared for his life. “On October 2, we must conduct a demonstration before the statues of B.R. Ambedkar and Mahatma Gandhi. Let’s ask questions.”

Baseline tests mooted ahead of reopening of schools in AP