A palm tree trunk came crashing down on cars during the dust storm in New Delhi, on Sunday. (Photo: PTI)

In a sudden change of weather, the sky turned cloudy around 4:30 pm and gusty winds swept the city. 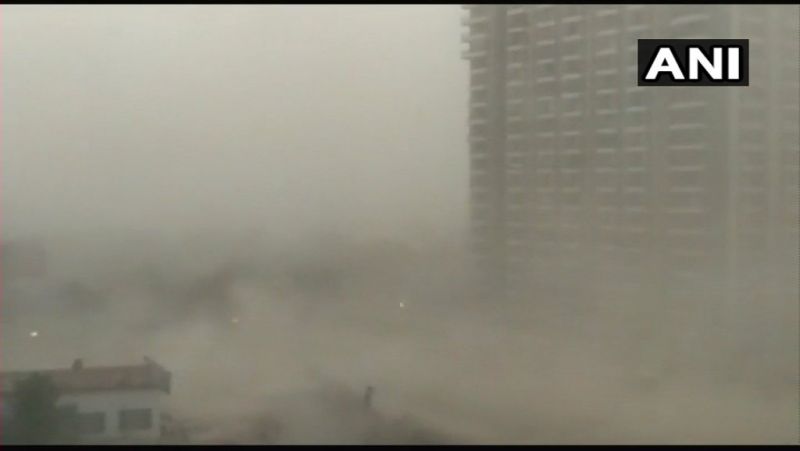 Metro services, too, seem to be affected as the movement on the Noida Dwaraka line was stalled for 30 minutes. However, services resumed after a while.

Metro services between Indraprastha and Karol Bagh metro stations were disrupted after a tree fell on the tracks.

The strong winds knocked down a number of trees in the city. Four incidents of wall collapse were reported from Najafgarh, Transit Camp, Nehru Place, Mohan Garden in Uttam Nagar and Raj Nagar in Palam, said a senior officer from the Delhi Fire Service.

The Northern Railways said the train movement was disrupted on the section between the Hazrat Nizamuddin and Palwal stations due to tree felling. A few passenger and freight trains were held up for around 25 minutes because of the disruption. The Kalka-New Delhi Shatabdi Express was also stopped near Sonepat due to uprooting of trees.

The Met office has forecast light rains will follow the dust storm.

The Indian Meteorological Department had on Thursday predicted that Uttarakhand, Jammu and Kashmir and Himachal Pradesh would witness thunderstorm accompanied by squall.

It had also forecast parts of Rajasthan might see the dust storm. Thunderstorm over these hill-states and its subsequent effect on plains in north Indian is due to a new western disturbance, the IMD had said.

(With inputs from PTI)