Hyderabad: Cultivation down, prices of flowers shoot up

More than 10,000 kg of jasmines used to land at the city markets including Secunderabad Monda Market and Phoolbagh near Moazzamjahi market a decade ago, Of this, more than 70 per cent would be from horticulture fields located on the city outskirts.

Hyderabad: Jasmine and other flowers have turned costlier after a dip in output that is caused by agricultural land being converted to non-farming purposes.

Land where flowers were cultivated even a decade back has been converted for residential, commercial and industrial use.

More than 10,000 kg of jasmines used to land at the city markets including Secunderabad Monda Market and Phoolbagh near Moazzamjahi market a decade ago, Of this, more than 70 per cent would be from horticulture fields located on the city outskirts. 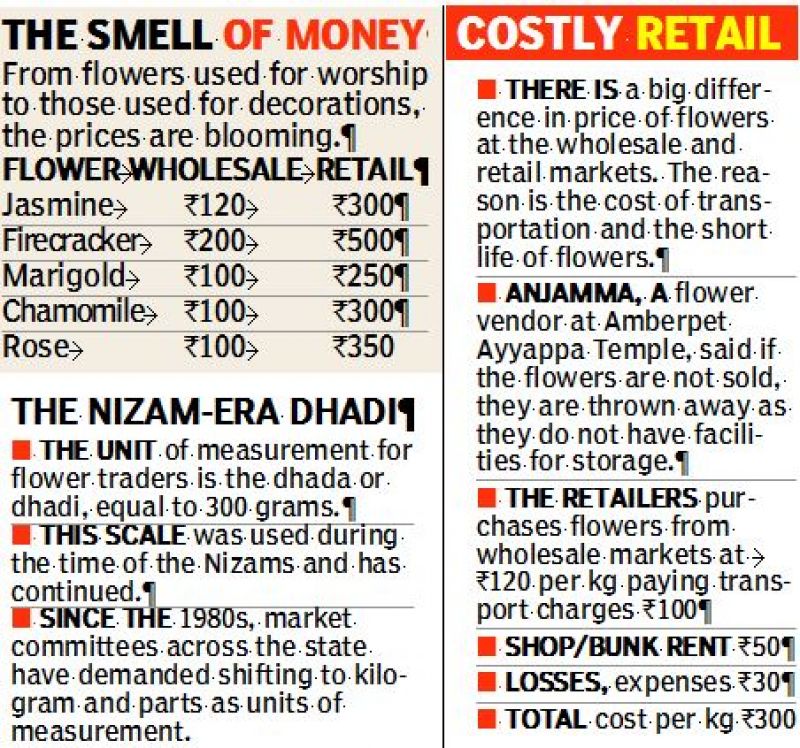 But not any more. There are few flowers from the outskirts coming to the main market at Gudimalkapur and other markets. Most of the flowers are imported from Andhra Pradesh, Karnataka, Tamil Nadu and Maharashtra.

Wholesaler B. Mahipal Reddy at the Gudimalkapur flower market said jasmines were reaching the city from Mylavaram and Vijayawada. “Most of the flowers used for decorations, like gerbera and carnations are being supplied by farmers from Hosur in Tamil Nadu. Crossandra, marigold, and rose come from Chikballapur in Karnataka,” he said.

He said after the wedding season, the price of jasmine would fall to Rs 10 per dhada, or 300 grams. “The price has increased as it is transported from other states. Jasmine is being sold at Rs 40 per dhada,” he said.

He said arrival of jasmine stood at 10,000 kgs, imports from Karnataka and AP replacing the locally grown flowers. Imports of other varieties have fallen. Only 200 kg of marigold is being imported against 1,000 kg earlier. Nearly, 1,000 kgs of rose are imported,” he said.

Horticulture assistant director K. Venu Gopal said urbanisation and shortage of labour among other reasons had resulted in the fall in flower output. “Earlier, nearly 2 lakh pieces of cut flowers were grown in the state. Now, the state is importing 2.5 lakh pieces a day,” he said.

He said the department planned to encourage farmers to cultivate cut and loose flowers during the monsoon season.