Prince William, Duke of Cambridge and his wife Catherine (Kate), Duchess of Cambridge enjyoing the jeep safari inside the Kaziranga National Park of Assam. (Photo: PTI)

Guwahati: The maiden visit of Duke and Duchess of Cambridge Prince William and Princess Catherine (formerly known as Kate Middleton) has added fervour to the festivities of Rongali Bihu in Assam.

The British royals on Tuesday landed at the garrison town of Tezpur, to visit the world's largest one-horn rhino park in India, the Kaziranga National Park.

Assam chief minister Tarun Gogoi who himself was present to receive them told reporters, “We are very happy and honoured that Prince William and his wife visited the Kaziranga National Park and we have served them a taste of Assamese cuisine and hospitality.” His visit to Assam during the Rongali Bihu has also brought the rich cultural heritage of the state into focus, he added. 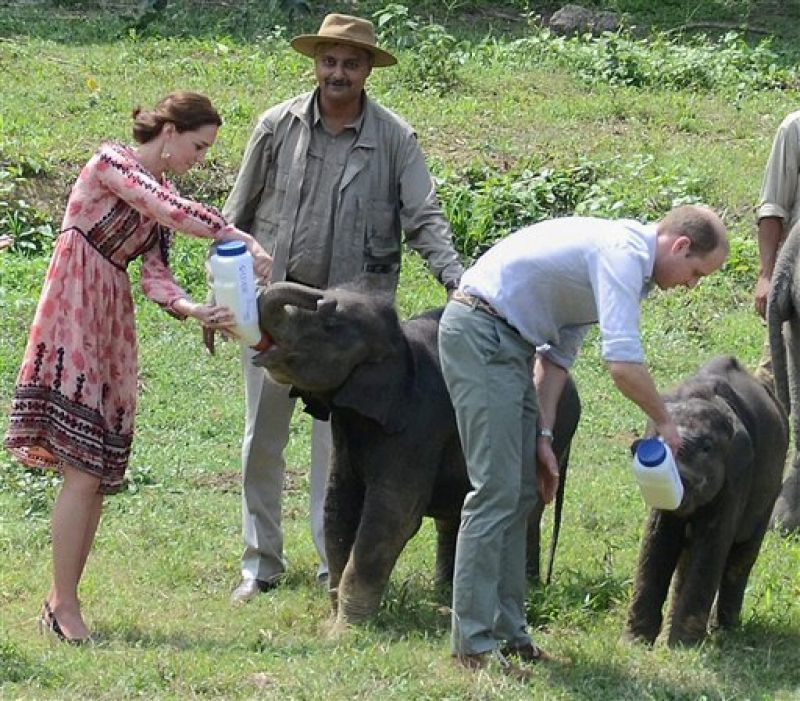 The royal couple was lodged at the Diphlu River Lodge near the Kaziranga National Park on Tuesday night. The local artistes presented ethnic cultural dances in their honour.

The British High Commission which was looking after their visit in a statement said, “The royal couple are interested to see how communities manage the conflicts that arise when humans and wild animals live in close proximity and will also meet park rangers inside Kaziranga, to discuss how the Park protects its animal populations from poachers as demand in other parts of Asia for rhino horns continues to rise.”

In what is also welcomed by various conservationist groups, Prince William and his wife, Kate, planned their visit to Kaziranga particularly to focus global attention on conservation. However, Kaziranga a world heritage site of UNESCO has been in focus due to frequent killing of rhinos by poachers. J

ust three days back yet another rhino had been poached, bringing the total number of rhinos killed in Kaziranga National Park in 2016 to six. Poachers shot dead the rhinoceros and sawed off its horn on Sunday.

The 480-square-kilometer grassland park is home to the world's largest population of rare, one-horned rhinos as well as other endangered species including swamp deer and the Hoolock gibbon.

Meanwhile, the outlawed Ulfa (Independent) in a statement has also welcomed the visit of the royal couple and hoped that their visit to Kaziranga may be a turning-point to save the rhinoceros whose plight in its habitat is a matter of great concern.

Amidst elaborate security arrangement the British Royals on Wednesday took safari ride to have a first hand look of the park. They left for Bhutan on Wednesday.