Rajeswari was on her way to office when the accident happened and she is the only child in her family. (Photo: NDTV)

Salem/Chennai: A day after a woman was grievously injured in a road accident owing to a flagpole of the ruling AIADMK, another controversy seems to be brewing in the state with Chief Minister Edappadi K Palaniswamy saying the Madras High Court ban was only against banners and the Opposition accusing the ruling party of becoming power-drunk.

When asked about the woman rider who suffered fractures in her leg after she got into an accident trying to avoid a flagpole, Palaniswamy, on Tuesday, said that he had not come across information about any such incident but added: "High Court ban was against the banners and not flagpoles."

On Monday, a 30-year-old woman who was riding a scooter was hit by a truck on after she tried to avoid a flagpole of the AIADMK on a highway in Tamil Nadu’s Coimbatore, reported NDTV.

The woman has been identified as Anuradha Rajeswari and suffered serious fractures on both her legs after the heavy vehicle’s front right wheel ran over them. She has been admitted to the intensive care unit of a local hospital.

Rajeswari was on her way to office when the accident happened and she is the only child in her family.

The same truck had also hit another man who was riding a motorcycle. He suffered injuries on his hand and knee. 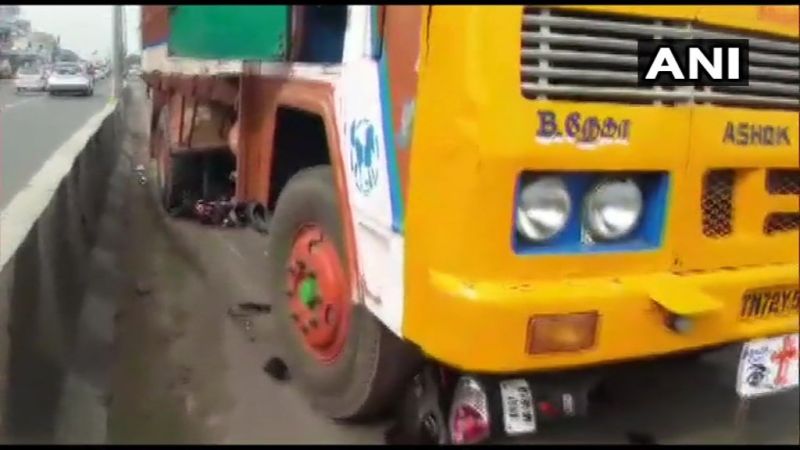 Rajeswari's family has alleged the AIADMK hoarding was put up on Avinasi Highway to welcome Chief Minister E Palaniswami, who was in Coimbatore on Monday. "The police are covering it up," the woman's uncle Sivan told NDTV.

The police, however, told NDTV, "The driver has confessed that he was speeding as his owner had asked him to come fast. The flagpoles were erected on the sandy side of the road. There is no way they could have reached the right lane of the highway. We have filed a case only against the truck driver." The family disagreed with the police version.

DMK leader A Saravanan slammed the AIADMK calling it "power drunk" and "insensitive to the sufferings of the people".

"The AIADMK functionaries are power drunk, they don't want to abide by the law of the land. Madras High Court has again and again spoken against the banner culture but the Chief Minister today said that their order was only against banners and not flagpoles. He has admitted that he has no sensitivity towards the suffering of the people," Saravanan told ANI in Chennai.

He said that the AIADMK was refusing to learn lessons from their "past mistakes" and "illegal acts" and was endangering the lives of the common people.

"This has become a norm that every other month something done by the AIADMK cadre is endangering the lives of the people. This is a classic example of how police, which otherwise would have taken action, has not done anything only because AIADMK is involved," the DMK leader said.

Saravanan said if the police were given free rein to control these illegal banners and other ostentatious material, we would not have been praying for the recovery of the victim whose legs got crushed by a lorry.

He said that the AIADMK government does not believe in "good governance" but in publicity and spending money on "these grand ornaments".

This comes merely two months after a massive controversy had broken out over banners and hoardings in the state after a woman was crushed to death in Chennai owing to an illegal flex banner.

In September, a 23-year-old Subashree, a software engineer was killed in Chennai after an illegal hoarding fell on her, following which she was hit by a water tanker. She was rushed to a hospital and was declared brought dead. She was on her two-wheeler on the Pallavaram-Thoraipakkam Radial Road when an unauthorised life-size hoarding knocked her down.  In seconds, a tanker her hit her scooter, injuring her on her head.

Earlier, the Madras High Court has ordered no political hoardings would be allowed on roads due to safety concerns. The Tamil Nadu government had approached the court before Prime Minister Narendra Modi met with Chinese Xi Jinping seeking permission for putting up hoardings to welcome the leaders. Though, the court directed the government to comply and refrained from putting up banners or hoardings on the highway.