DECCAN CHRONICLE. | NAVEENA GHANATE
Published Nov 12, 2018, 12:56 am IST
Updated Nov 12, 2018, 1:17 am IST
They are often filled with advertisements which allow them to earn revenue, whenever a user unknowingly downloads them.

Hyderabad: At least 20 apps have emerged on Google Play Store that are related to the Hyderabad Metro Rail. These apps primarily claim to give the timings and map information and mimic the functionality of legitimate apps to trick unsuspecting users into installing them. 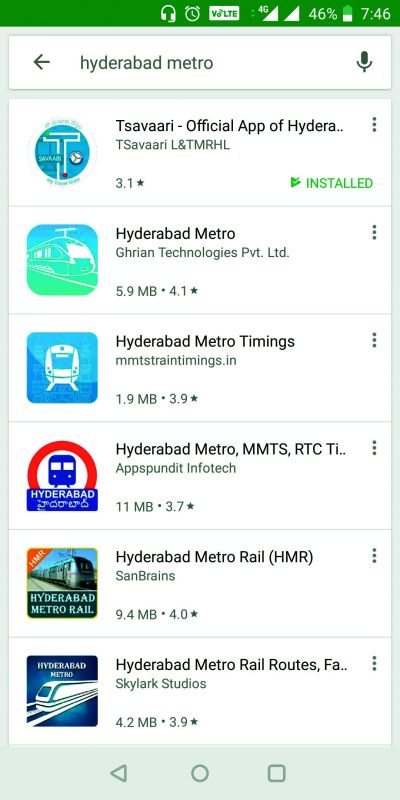 A screenshot shows some of the Metro apps available on playstore. T-savaari is the only authentic app provided by L&THMRL.

They are often filled with advertisements which allow them to earn revenue, whenever a user unknowingly downloads them. The official app of the Hyderabad Metro goes by the name of ‘T-Savaari’ which was launched by Prime Minister Narendra Modi.

Unaware of this app, some users have installed different apps which are giving them wrong information about train timings and other facilities.

A commuter from KPHB, Mr B. Abhishek, said, “I installed the Hyderabad Metro Rail app, which said the first train was at 6 am and I saw a flyer which said it starts at 6.30 am. I had to quickly pick an alternative mode of transport to reach my destination.”

These apps were created immediately after the Metro Rail was inaugurated but were not updated since. Some users, who are unaware of the original app, have reached out through social media to L&T as well. A user who goes by the name Sarah Li also pointed out a similar issue through social media.

A team of officials from L&T are dedicated to work on the app. This app is regularly updated and even shows timings of MMTS, RTC buses and other services like Ola and Metro bikes. HMRL managing director N.V.S Reddy, confirmed that there is only one app operational for the city metro which is the ‘T-Savaari’ app.

Since T-Savaari allows passengers to register for buying or recharging the Metro Rail card which involves money, officials are requesting users to be aware of such apps. An official said, “Most of the apps are giving basic information on timings, corridor and ticket pricing.”