Minister and MK Stalin race to help flood-hit in Nilgiris

Ooty: After the rains stopped, it looks to be “rain-linked politics” in the hills as both the AIADMK and DMK are rushing to the flood victims to console them. While M.K.Stalin, DMK president landed in the hills here on Sunday afternoon to begin his two day tour of flood affected areas in the Nilgiris, Udumalai K. Radhakrishnan, State minister for Animal Husbandry, made a whirlwind tour of the hills on Sunday morning and distributed compensation to families of the flood victims.

What is intriguing is that when the DMK here announced M.K. Stalin’s tour progamme on Saturday evening, the AIADMK swung into action immediately. To the surprise of many, minister  Radhakrishnan arrived early on Sunday  morning, visited the families of the victims and handed over compensation of Rs 10 lakh each to the five families of the victims in Gudalur and Ooty taluks,  as announced by the state chief minister, Edappadi K Palaniswami. 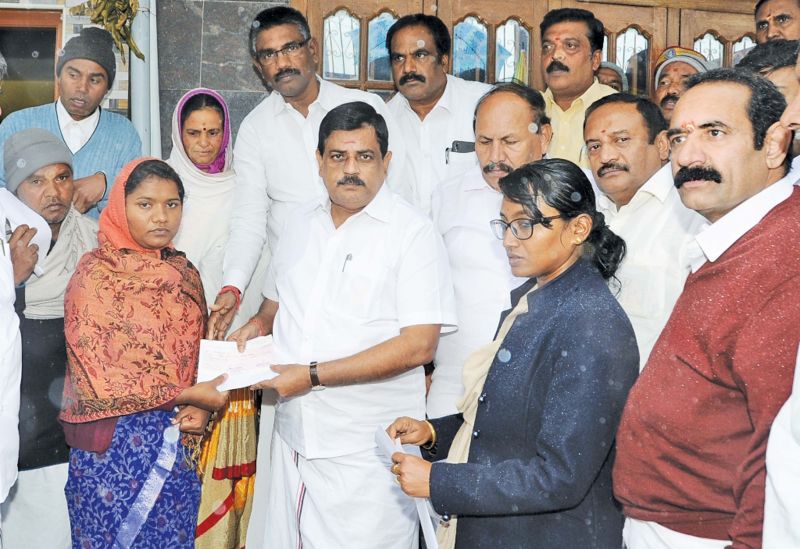 K.Radhakrishnan, minister for animal husbandry, hands over the compensation to the member of a flood affected family at Kuruthukuli village near Ooty on Sunday. (Photo: DC)

Radhakrishnan said that the Tamil Nadu chief minister will take all necessary steps to mitigate the suffering of the flood victims in the hills and added that if the district administration sent a list of those residing in landslide sensitive spots, efforts will be made to relocate them to a safer place. He also visited flood affected areas in the Ooty and Gudalur belts.

Stalin, who began his tour on Sunday afternoon, first visited the family of the flood victims at Naduvattam and handed over solatium of `one lakh to each family on behalf of the DMK. He then proceeded to Gudalur to visit the flood affected areas.  On Monday morning he will be visiting flood affected areas in the Ooty rural limits.

Meanwhile,  J. Innocent Divya, collector of Nilgiris, said that road connectivity to the TNEB camp at the hydro-power station at Avalanche was cut off for the past three days. A helicopter was used to supply food and rescue works, and connectivity was re-established on Sunday.

India may overtake China as most populous country sooner than UN projections: Report