Activists of Bajrang Dal burning the tyres and blocking a road following a bandh call in response against the attack on pilgrims, in Jammu on Tuesday.

Mumbai: A day after Dahanu Road (in Mumbai) residents and Amarnath pilgrims Usha Sonkar and Nirmala Thakur died when their bus was shot at by unidentified terrorists in Jammu and Kashmir on Monday, one of deceased women’s family said that stones were pelted at their bus a day before the attack.

Pradip Thakur, son of Nirmala Thakur (67), said stones had been pelted at his mother’s bus on Sunday. “Stones were pelted on our bus when we were coming from Amarnath. We are fine and going to Vaishnav Devi,” were Nirmala Thakur’s last words to her family before the attack, her son Pradip told this newspaper.

According to the police, a group of terrorists had attacked police parties in Batengoo and Khanabal areas of Anantnag district, and the pilgrims’ bus had got caught in the crossfire.

When 55 year-old Pallavi Abhyankar, who was also in the bus, heard the gunshots, her first impression was that crackers were being burst.

“I first thought they were crackers. It was only a few moments later that I realised the horror as I saw my fellow passengers hit by the terrorists’ bullets,” Ms Abhyankar said.

The homemaker, who also runs music classes, said the bus driver's presence of mind saved many a lives.

“Had it not been for the driver, the toll would have been more,” she said.

“The terrorists fired from the front and the right side of the bus. As a result, the maximum persons who died or were injured were those sitting on the right side,” she said. Ms Abhyankar, who escaped the bullets, is on her way to her native place Dahanu in Palghar district. 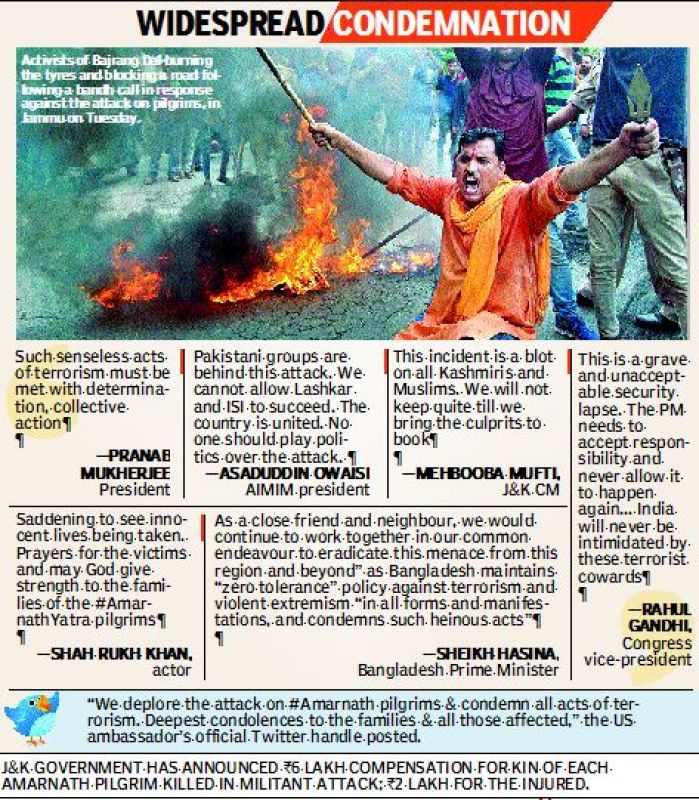 “We left Katra at 3pm. Our plan was to go to Vaishno Devi. There was a problem with the vehicle. We stopped near Pampore at 5 pm and left from there at around 6.50 pm. The firing happened between 8.20 pm and 8.30 pm,” Ms Abhyankar said.

“After the terror attack on our bus, the Army personnel and took us to a safe location. The injured, who included our tour arranger, were taken to hospital,” she said.

The bus had over 50 pilgrims from Gujarat and Maharashtra, including 11 from Dahanu. Most of them were sleeping when their vehicle was attacked, she said.

Meanwhile, Gujarat brimmed over with anger and anguish as the bodies of seven Amarnath pilgrims arrived in Surat amid angry protests across the state and calls to Prime Minister Narendra Modi for reprisal.

A pall of gloom enveloped the airport when an Indian Air Force’s Hercules transport aircraft landed with the bodies, the wounded, and those who miraculously survived the ambush, amid a high alert in the state.

Though no violence has been reported from anywhere in the state so far, there were angry protests in various cities and towns, with people burning effigies of ‘terror’, and demanding that the Modi government “avenge” the killings and punish Pakistan for the outrage.

Meanwhile, despite the attack, hundreds of pilgrims continued to journey to the Amarnath cave, chanting ‘Bam bam Bhole’.

■Amarnath Yatra attack: Only registered convoys to be allowed