The house which was damaged in a landslide at Tandrakuli on NH 66 near Kumta on Sunday. (Photo: KPN)

Karwar/Udupi: In a  tragic incident, three children were killed and eight injured in a landslide at Tandrakuli village in Kumta Taluk  on Sunday.

The coastal districts have been receiving heavy rain in the last two days. While the landslide in Kumta killed three children, the one in Ottinene in Udupi district blocked National Highway 66. In both places, local residents blamed the contractor carrying out the four laning of  National Highway 66, for unscientific work.

Those killed in the landslide at Tandrakuli in Kumta have been identified as Dhanush Manjunath Ambiga (1), Yathin Narayana Ambiga (7) and Bhavya Narayana Ambiga (10). The incident took place when huge amount of mud from the hillock at Tandrakuli fell on the National Highway and later on four houses situated on the other side of the road! The landslide was so severe that the mud and stones fell across the road and completely damaged the houses on the other side. 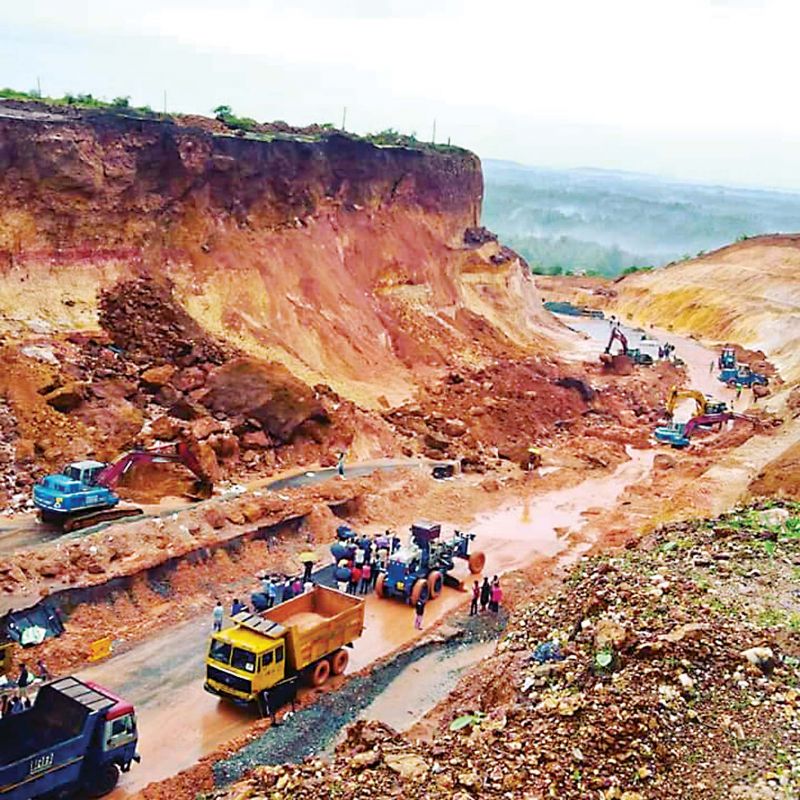 Workers clear the National Highway 66 which was blocked after a landslide near Kumta on Sunday. (Photo: KPN)

The incident took place around 10 am on Sunday. Though Dhanush and Yathin were rushed to hospital, they could not be saved. Bhavya’s body was found under the mud after about two hours, according to officials. About eight who were injured in the incident have been rushed to the Kumata Government Hospital.

“The government has declared Rs 4 lakh compensation for the families of those killed in the incident. The injured are being provided treatment. The houses along with all the inmates’ belongings have been damaged. We are assessing the loss,” Additional DC Prasanna H told DC. Local residents blamed the contractors- IRB Infrastructure for the unscientific work.

“We may have to start an agitation against the contractors and authorities if they do not take necessary steps,” local resident Raghavendra Deshbhandary told reporters. People allege that the mud and boulders in the hillock must have got loose as the contractors had blasted the stones for road widening. According to officials, the contractors had informed the district administration that they had taken all scientific measures, including step cutting of the hillock. Officials of IRB and NHAI have rushed to the spot. “As the mudslide was on a highway, the traffic had to be diverted. The traffic resumed late in the evening,” Kumta AC Ramesh said.

The second landslide took place at Ottinene in Udupi on Sunday around 4 am.

As the landslide was on NH 66, traffic was stalled. Vehicles were forced to wait in a 6 km line! Traffic flow was restored only by 10 am.

Many now have immunity against Covid19