As Rajya Sabha election comes to an end, spotlight back on GST bill

New Delhi/Lucknow: With regional players dominating Rajya Sabha, the Centre is all set to give a major push to the ambitious Goods and Services Tax (GST) in the Monsoon session of Parliament.

The government is counting virtually all the regional players  barring AIADMK on board for the ambitious legislation, while parleys are stated to be under way to get the Tamil Nadu chief minister J Jayalalitha to soften her stand.

The West Bengal chief minister Mamata Banerjee has strongly been advocating the passage of the GST Bill. With the Congress earning her wrath by going along with the Left during the just concluded Assembly elections in the state, Ms Banerjee led Trinamul Congress is likely to maintain a distance from the main Opposition party in both the Houses of Parliament. 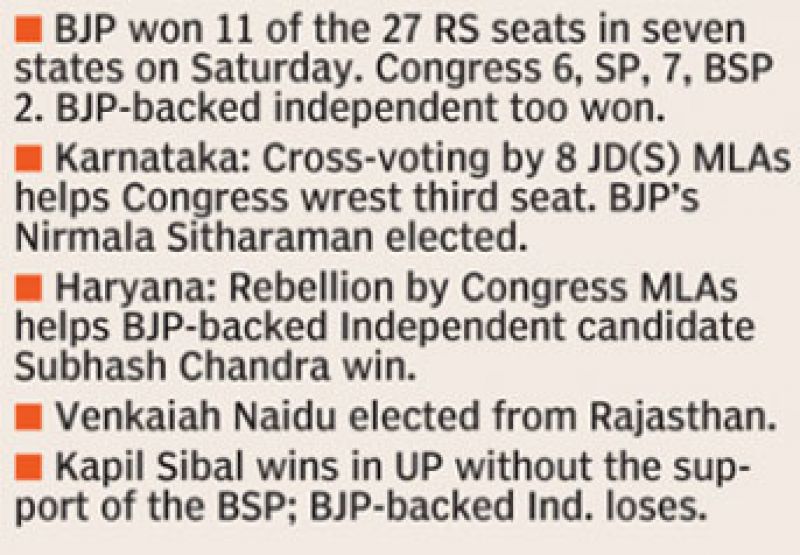 The Bihar chief minister Nitish Kumar and his Odisha counterpart Navin Patnaik have also been supportive of the GST Bill on accounts of the benefits anticipated for their states after the passage of the legislation.

With the Congress losing crucial Assam and Kerala elections recently and getting its strength reduced in the Rajya Sabha on the conclusion of the biennial elections for the Upper House, the government is hopeful that the main Opposition party will lose much of  sheen in opposing the GST legislation.

The government is also counting on the support of the Left parties for the GST Bill, with the new government in Kerala left by the Left. Meanwhile, cross voting and clashes marred the Rajya Sabha elections to 11 seats in Uttar Pradesh on Saturday even though all parties managed to get their official candidates elected.

However, the major jolt for Congress came in Haryana where the party suffered through apparent deliberate wrong marking of the ballots by its 14 MLAs that led to the defeat of the party-backed Independent candidate R.K. Anand who was mainly fielded by its arch rival INLD.