Tejashwi Yadav has shared a video of him dancing with brother and groom Tej Pratap Yadav. (Photo: ANI | Screengrab)

Patna: Lalu Yadav’s eldest son Tej Pratap will tie the knot with his fiancee Aishwarya Rai on Saturday. The celebrations for the wedding are on in full swing.

It seems that Tej’s younger brother Tejashwi is enjoying himself the most. The former Bihar deputy chief minister Tejashwi Yadav has posted a video on his Facebook page, of him dancing with the groom Tej Pratap.

While Tejashwi is wearing a brown kurta, his brother Tej is decked in beige with a white towel (gancha) wrapped around his head. Both of them are seen grooving and matching steps with each other in the 26-second video posted by Tejashwi.

Tej Pratap Yadav's fiancee is the daughter of six-time Rashtriya Janata Dal (RJD) lawmaker Chandrika Rai and a cabinet colleague of Lalu Yadav in many governments.

The Yadavs have ensured that the wedding is a grand affair. According to reports, the guest list for the grand wedding runs into several thousand that includes top political leaders from across the country.

Even though Bihar Chief Minister Nitish Kumar, ended his party's grand alliance with Lalu Yadav's Rashtriya Janata Party and the Congress, he is expected to set aside their political rivalry and make it to the wedding. So will Deputy Chief Minister and BJP leader Sushil Kumar Modi

What is drawing attention of people of Patna is the poster put up outside the residence of Lalu Yadav where groom Tej Pratap is depicted as Lord Shiva and bride Aishwarya as Goddess Parvati. 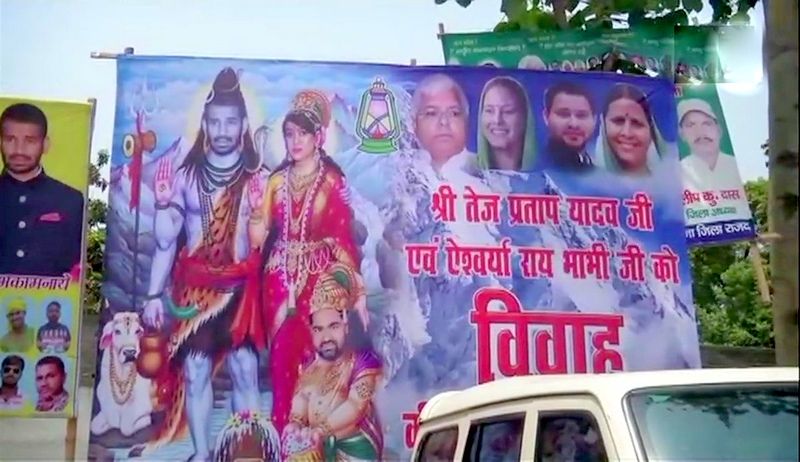 The wedding is taking place at the veterinary college grounds in Patna, at the same place where Deputy Chief Minister Sushil Modi's son was married after threats from Tej Pratap Yadav.

When Sushil Kumar Modi hosted a reception for his son's marriage, Lalu Yadav had made it a point to show up and spend two hours to bless the newly-weds. Sushil Kumar Modi is expected to reciprocate that gesture.

Tej Pratap Yadav, the eldest of nine children was health minister until last July, when Nitish Kumar dumped the RJD and formed a new government with the BJP.

Videos about jailed AAP minister being leaked by people close to Kejriwal: BJP