Bengaluru: Yesteryear movie heroine Khushbu Sundar caused a flutter when she slapped a man, believed to be a Congress party worker, after the youth allegedly groped her in the crowd at an election rally here on Wednesday.

Khushbu, who is AICC member and Congress spokesperson, was in Bengaluru to campaign for Congress-JDS alliance candidate Rizwan Arshad. She was wading through a huge crowd that had gathered outside Rizwan’s house when the youth allegedly misbehaved. Videos showing her charging in rage at the man and slapping him went viral.

However, there were some comments on social media saying the video did not show clearly that the man had misbehaved, but then in a crowd so big and thick, it would not be possible to say for sure that he was innocent.

Rizwan was quoted in the media saying he had checked with Khushbu and she said she slapped him because he misbehaved with her in the crowd. He said the man had been arrested. 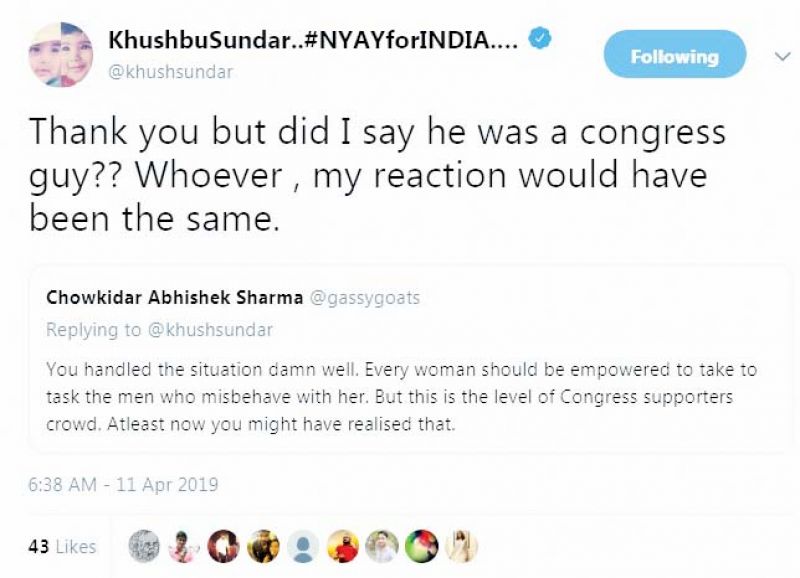 A majority of people, not just her fans and Congress members, complimented Khushbu on social media for being brave and punishing her tormentor.

One saffron follower tweeted that she handled the situation well but she must now know that this sort of misconduct happened only in the Congress rallies.

“You handled the situation damn well. Every woman should be empowered to take to task the men who misbehave with her.

But this is the level of Congress supporters crowd. Atleast now you might have realised that”, tweeted Chowkidar Abhishek Sharma.

There was another slap from the angry woman. “Thank you but did I say he was a Congress guy?? Whoever, my reaction would have been the same”, she tweeted her response to the taunting Chowkidar.

Officials puzzled over lack of demand for Uppal Bhagat plots

Consider booster dose for those above 40: INSACOG