Prince William, Duke of Cambridge and his wife Catherine (Kate), Duchess of Cambridge being presented with a Monumental Statue of Historical Shiv Dol and Ranghor by Chief Minister of Assam Tarun Gogoi. (Photo: PTI)

Tezpur: The Duke and Duchess of Cambridge Prince William and Catherine were on Tuesday accorded a warm and traditional welcome as they arrived on a two-day trip here during which they will visit Kaziranga National Park, famed for its one-horned rhinoceros.

The royal couple, which arrived here at around 6 PM, was given a red-carpet welcome at the airport by Assam Chief Minister Tarun Gogoi and his wife Dolly Gogoi who greeted them with a traditional 'muga gamosa' (muga scarf with red motifs). 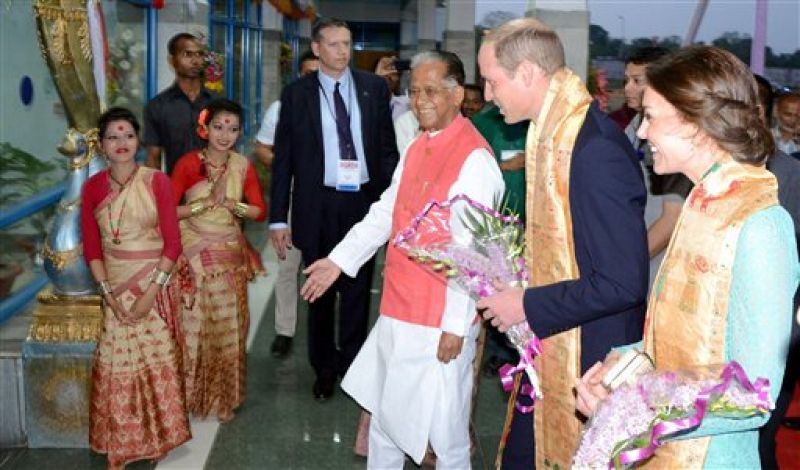 The Royal Couple received a warm and traditional welcome. (Photo: PTI)
As the Duke, in a black suit, and the Duchess, in a sea-green dress, were escorted towards the airport lounge, they were welcomed traditionally by the Assamese 'gayan-bayan' and dancers performing Bihu, jhumur and bagrumba.

They spent some time in the airport lounge where they were served Assamese snacks 'Jolpan', 'pithas', 'Larus' and 'sunga pitha' with the couple tasting 'til pitha' and 'ghila pitha', official sources said.

As the couple later drove out of the airport in a Range Rover they waved to young girls wearing traditional mekhla chador lining the road to the airport at Salonibari here.

The couple's convoy left for the Diphlu River Lodge near where they will stay the night and attend a programme on ethnic cultural traditions, including Bihu and jhumur dance, to be presented by local artistes in their honour.

The Duke and the Duchess will visit the , famed for the one-horned rhinoceros, and enjoy a jeep safari inside the Park tomorrow morning.

The couple will also interact with forest officials to find out more about the role of conservation in the lives of rural people there and visit the Centre for Wildlife Rehabilitation and Conservation (CWRC) and the centre of the NGO Elephant Family.

The royal couple are interested to see how communities manage the conflicts that arise when humans and wild animals live in close proximity and will also meet park rangers inside Kaziranga, to discuss how the park protects its animal populations from poachers as demand, in other parts of Asia, for rhino horns continues to rise, a release by the British High Commission added.