Neighbors and relatives visit the family members of a victim who died after a massive fire broke out at Puttingal temple. (Photo: PTI)

Thiruvananthapuram: The toll in the fire tragedy in Puttingal Devi Temple at Kollam rose to 111 with two more persons, including one of the fireworks contractors who carried out the display, succumbing to their injuries at the Medical College Hospital on Tuesday.

The deceased fireworks contractor was identified as Surendran (67), from Kazhakutttom who also one of the main organisers of the pyrotechnics at the Puttingal temple. He had suffered 60 per cent burns in the accident, police said.

The other deceased was Sathyan (55) also from Kazhakuttom, who had suffered 90 percent burns, police said.

The accident at the century-old Puttingal Devi Temple complex occurred during competitive display of fireworks early Sunday morning after a spark from a firecracker fell on the storehouse containing crackers, triggering explosion.

Satyan from nearby Kazhakootam, who was undergoing treatment for injuries suffered in Sunday's accident, died at the Thiruvananthapuram Medical College Hospital (TMCH), an official release said.

He was in a critical condition and had been on ventilator support before the end came this morning. 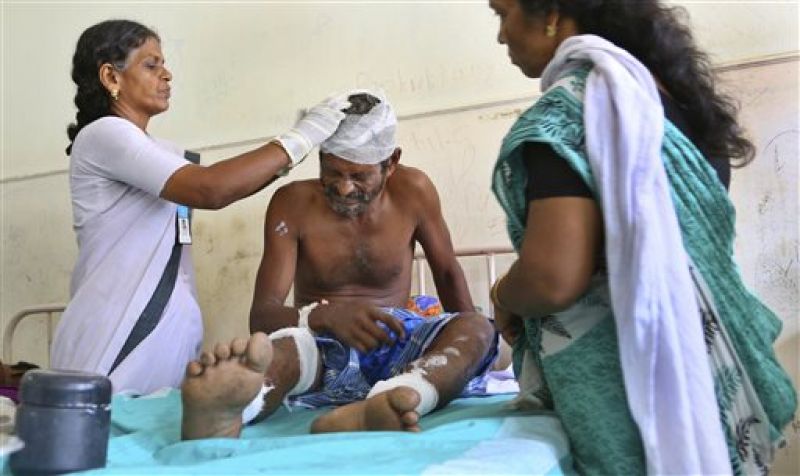 A victim grimaces in pain as he receives treatment at Kollam district hospital a day after he was injured after a massive fire broke out during a fireworks display at the Puttingal temple complex. (Photo: PTI)

The condition of 26 other injured persons, including seven in TMCH, continues to be serious. Around 350 persons were undergoing treatment at various hospitals.

A total of 1,039 persons have been treated as outpatient in various hospitals in Kollam and Thiruvananthapuram, according to Chief Minister Oommen Chandy.

The terrible mishap occurred when sparks from a firework fell on a storehouse stocked with crackers, triggering powerful explosions.

4 bodies recovered, 19 people rescued after many people fall in well in MP's Vidisha

No application received for EU authorisation of Covishield, says EMA