Pak will pay for this misadventure: Nirmala Sitharaman on J&K attacks

Defence Minister Nirmala Sitharaman said, 'Activities of terrorists in the hinterlands are severely curtailed due to relentless efforts of security forces.' (Photo: ANI)

Jammu: With two terror attacks on security forces in Jammu and Kashmir in the last two days, Defence Minister Nirmala Sitharaman on Monday said "Pakistan will have to pay for this misadventure."

The Defence Minister, who arrived in Jammu on Monday to meet the injured soldiers and civilians and assess the security situation, in her address to the media said, "The Ministry of Defence will stand by the Army. We have to work together with the Jammu and Kashmir government."

She said that the terrorists who attacked Jammu Army camp "enjoyed some local support, had handlers across the border."

On Saturday, one of the deadliest terror attacks took place in Sunjuwan Army camp in Jammu and Kashmir, in which five army personnel and a civilian died. Ten people, including six women and children, were injured. The police said terrorists of Jaish-e Mohammad were involved, who were killed after a nearly 36-hour operation.

Another suicide attack at Karan Nagar CRPF Camp in Srinagar was repulsed on Monday morning.

In a scathing attack on Pakistan, the minister said the neighbouring state has not taken any action "despite dossier after dossier given to them... In fact those responsible for Mumbai terror attack are freely roaming in Pakistan".

"Intelligence inputs show that terrorists were controlled by their handlers from across border. Evidence are being scrutinised by the NIA (National Investigation Agency). Pakistan is expanding the arch of terror to areas south of Pir Panjal and resorting to ceasefire violations to assist infiltration," said the Defence Minister.

Sitharaman said Pakistan has been violating ceasefire to help infiltrators. "Activities of terrorists in the hinterlands are severely curtailed due to relentless efforts of security forces," the Defence Minister added.

"Six fatal casualties, including a civilian were caused by the terrorists. Three terrorists have been eliminated. There were reports of four terrorists. The fourth terrorist must have been a guide and may not have entered the Camp area," Sitharaman said.

The Defence Minister expressed her condolences on loss of lives of our soldiers in the terror attacks in Jammu and Kashmir in the last 48 hours. She said, "I compliment the valour of our brave soldiers."

The Defence Minister also visited the Military Hospital in Jammu to meet those who were injured in the Sunjuwan Army Camp attack. 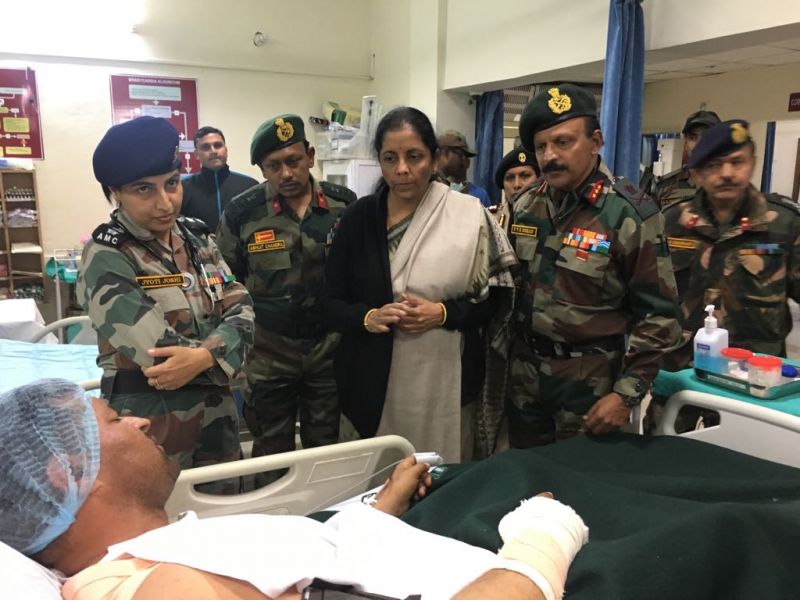 SC: Constitution called for law on poll panel, but nothing was done in 72 yrs