No one, including Modi, can question my public service: Manmohan Singh

'I am deeply pained and anguished by the falsehood and canards being spread' by Modi, Former Prime Minister Manmohan Singh says. (Photos: PTI)

New Delhi: Coming down heavily on the Prime Minister for accusing him of "not showing courage" to order a surgical strike after the 26/11 Mumbai terror attack, Manmohan Singh on Monday said “no one, including Narendra Modi, can question my public service to the country…to gain lost political ground”.

“My track record of public service to the country over last five decades is known to everyone. No one, including Modi, can lamely question it to gain lost political ground,” Singh said in a statement.

Modi, while addressing a public rally at Vadodara in Gujarat on Sunday, said: "Someone who served at a high position in the Air Force has said that after 26/11, they went to the then prime minister with a plan for surgical strikes. Sadly, the then government did not show the courage to do that".

“I am deeply pained and anguished by the falsehoods and canards being spread to score political points in a lost cause by none less than Prime Minister Narendra Modi, fearing imminent defeat in Gujarat,” Singh said.

The former prime minister said the Congress Party “needs no sermons on ‘nationalism’ from a party and Prime Minister, whose compromised record on fighting terrorism is well known”.

He “reminded” Modi that he had visited Pakistan without an invitation after terrorist attack in Udhampur and Gurdaspur. He also demanded that Modi reveal the reason behind inviting the “infamous” Pakistan’s Inter-Services Intelligence (ISI) to Air Force Base in Pathankot to investigate a terror attack that emanated from the neighbouring country.

The Congress leader also dismissed Modi's allegations that Singh and Mani Shankar Aiyar had discussed Gujarat Assembly elections with Pakistani officials on December 6, and conspired to make Ahmed Patel the chief minister of the state.

“The discussion was confined to India-Pakistan relations,” Singh said, adding that none of the Indian public servants and journalists who were present at the dinner could be accused of indulging in any anti-national activities.

Concluding his statement, Singh said he hopes the Prime Minister apologises “to the nation” for the allegations he made against the Congress party and its members, and restore “dignity of the office he (Modi) occupies”.

Here's the letter by Dr Manmohan Singh along with list of invitees pic.twitter.com/gwpeagJxU9 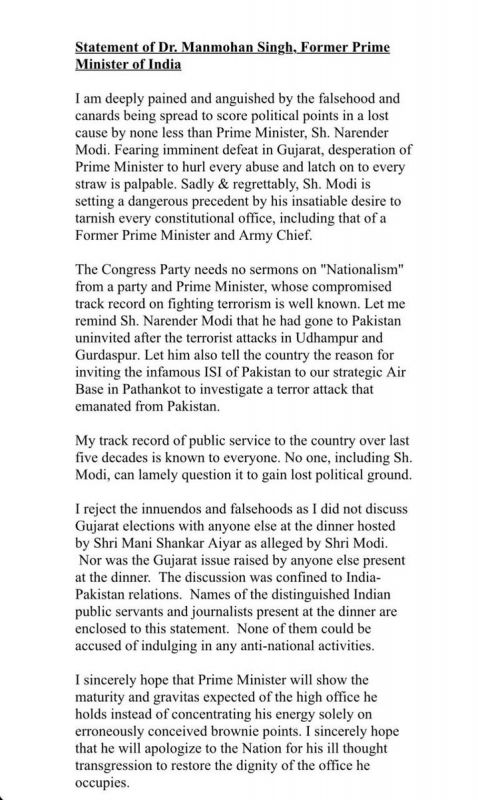 ■Why did Manmohan Singh not show courage to order surgical strikes post 26/11: Modi