The online GHMC property payment website clearly indicates that I have paid the tax in advance and is not accepting payment for two years now. Our repeated attempts to contact the designated inspector at the Secunderabad GHMC office proved futile as there was no concrete response towards fulfilling the tax payment.

Repair Syed Jung Lane completely
I was pleased to see my complaint and suggestion printed in Speak Out (Repair Syed Jung lane, October 7). The GHMC has taken some action by filling potholes in a  patchwork fashion. This has given some relief to commuters. I request the GHMC to get the road fully repaired.
— Suresh Raichura 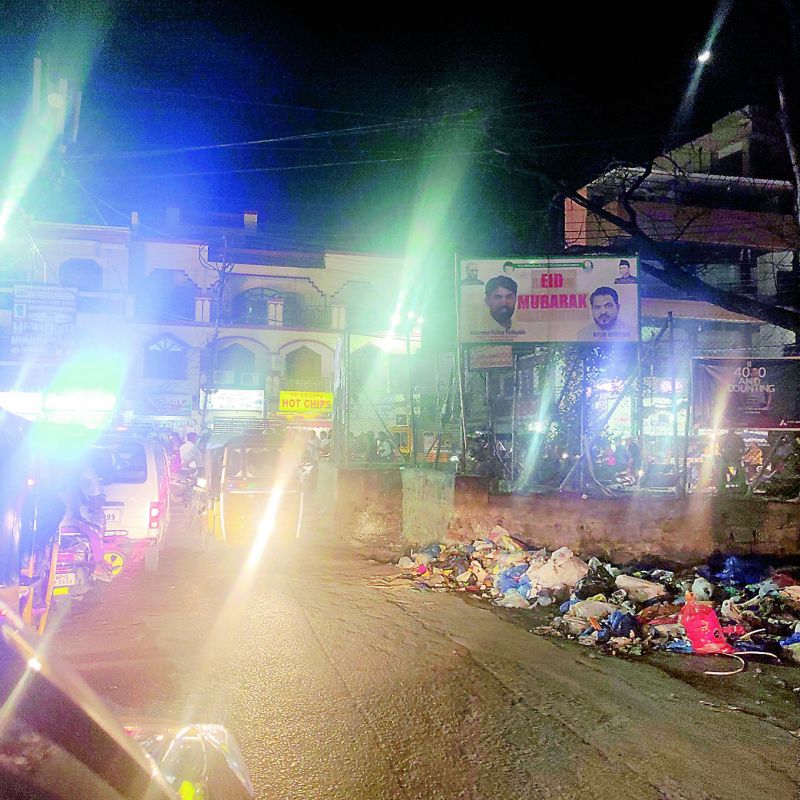 Uncleared garbage at PVNR Pillar No. 100
It is very unfortunate that garbage near Pillar No. 100 of the P.V. Narasimha Rao Expressway is not being cleared by the GHMC for days. Despite the many complaints lodged about sanitary issues, the local supervisor does not respond, What is worse, colony residents are throwing garbage though they have been asked not to.
— Mir Ahmed Hyderabad 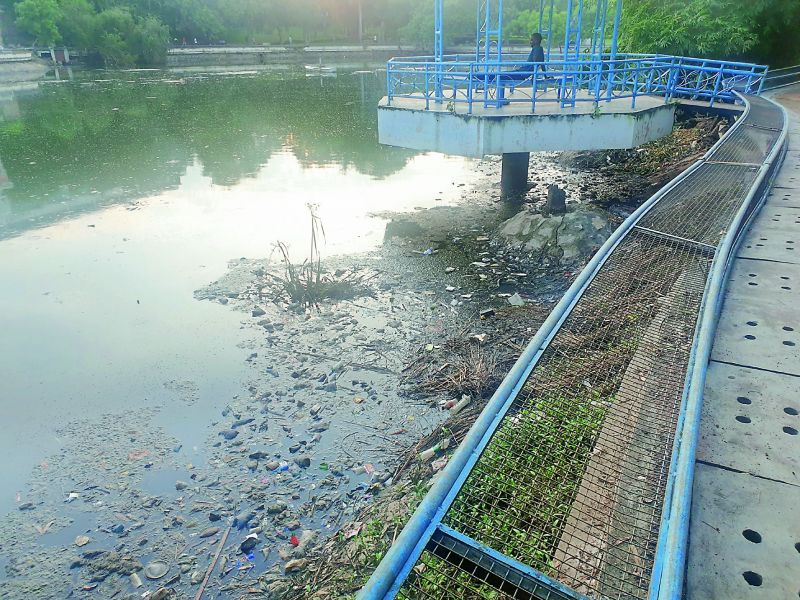 Bank visitors occupy Chintalbasti parking
This is the situation beside the Government Degree College at Chintalbasti, Khairatabad. We are facing many problems as employees of the ICICI Bank are parking their vehicles in the narrow lane. In spite of complaining to the bank officials many times, they are allowing this to happen. I request the Hyderabad traffic police to take action and impose a penalty for illegal parking under the Motor Vehicles Act.
— Kadaram Haridhar Chintalbasthi, Khairatabad 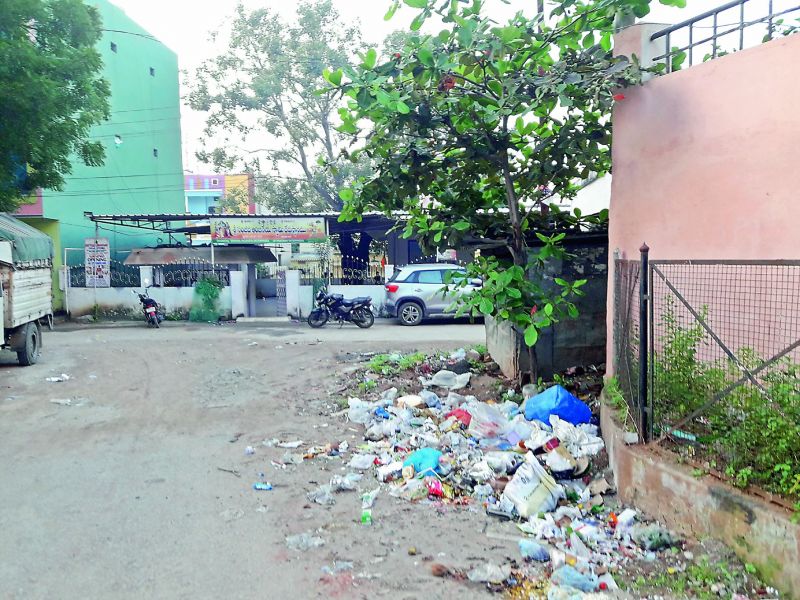 Drunks’ nuisance near Sitaphalmandi railway cabin
Drunkards regularly create a nuisance on the railway tracks between  Sitaphalmandi B cabin and the railway station. On November 5, at about 9 pm, they attacked a passerby. When the colony residents went to his rescue, the miscreants started hurling stones at them and then escaped. We complained to the police and the railway cabin staff alerted security personnel at the Sitaphalmandi station but the drunks had fled by then. We are terrified after this incident.

Some residents have witnessed anti-social activities. Girls who are walking alone are being teased. They enter the area through a small passage near Pragathi School. The passage was closed by the railway authorities but has been broken open. Regular police patrolling on the tracks near ‘B’ Cabin will deter these drunkards.
— New Mettuguda Residents Welfare Association 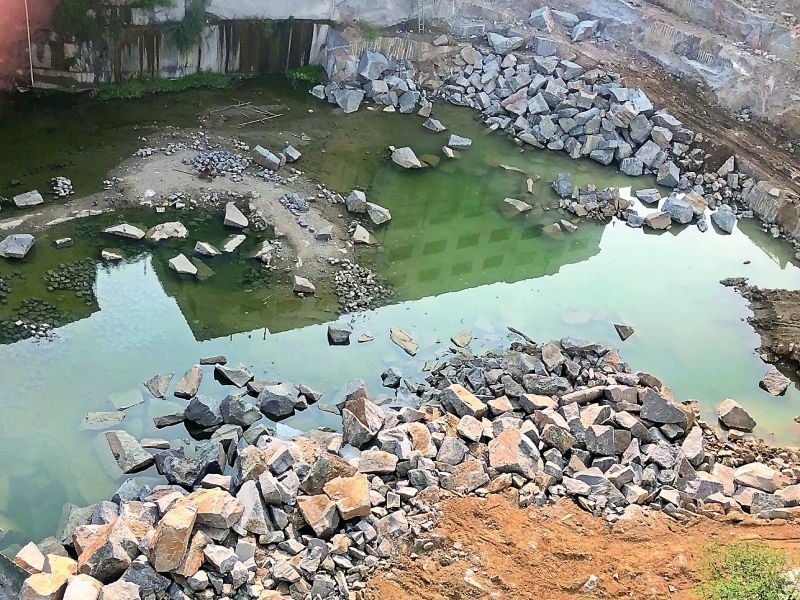 GHMC doesn’t allow me to pay tax
The online GHMC property payment website clearly indicates that  I have paid the tax in advance and is not accepting payment for two years now. Our repeated attempts to contact the designated inspector at  the Secunderabad GHMC office proved futile as there was no concrete  response towards fulfilling the tax payment.

The worst is the utter indifference of the GHMC  employees. My earlier attempts to inform the GHMC by email also did not evoke any response till date! The owner of an identical flat above mine in the same building has been able to make online tax payments.
— Gopalakrishnan C.S.

Dabeerpura nala work pending for 6 months
Work is pending on the big sewerage nala for over six months near Dabeerpura Darwaza, opposite Ali Cafe Main Road. The picture depicts the scene in the area near the Dabeerpura Darwaza. Despite calling the GHMC and lodging complaints so many times, they are not responding. Because of the narrow road, traffic heading to Noor Khan Bazaar, Purani Haveli, Darul Shifa, Kali Khabar, Yakutpura Bada Bazaar is slowing down at Dabeerpura Darwaza crossroad, There is also no place to park vehicles. Requesting the corporator or the MLA or the GHMC authorities to look this issue has not been of help.
—Abdul Aleem Hafez Babanagar

Builder on Tilak Road allows water to stagnate
These are pictures of a construction site on Tilak Road at Boggulakunta where water has been stagnating for more than a month. It is causing a foul smell and there is a danger of mosquitoes breeding and spreading dengue. We have made many requests to clear the water but there has been no action. Please help.
— Ramesh Rahul

How green was my park
This is the pathetic conditions of Vengala Rao Park on Road No. 1, Banjara Hills. I request officials to clean it up immediately.
— Basharat Mohammed Ali Khan Banjara Hills

Open book stalls at Metro stations
Metro Rail commuters who want to buy newspapers or magazines while travelling cannot do so as there are no vendors. There is a need to open a book stall and a coffee shop at all Metro Rail stations to cater to the needs of commuters. I request the management of Hyderabad Metro Rail to look into the matter.
— Syed Nissar, Malakpet

Ashoka trees cause of much trouble
The Ashoka trees on Street No. 15, Himayatnagar, in the Red Cross lane are becoming breeding places for mosquitoes. No one is trimming the overgrown trees despite our complaints to both the electricity department and the GHMC. We are also face a problem of dried branches which may fall on passersby and injure them. I request the officials through our ever reliable and evergreen  paper to take up the matter without delay.
— Ramachander Rao Hyderabad

Bodies are being buried near our houses
We are the flat owners and residents of BRC Sri Hemadurga Siva Hills, situated in Survey. Nos. 192 (p), 194 (p), and 195(p) at Puppalaguda, Gandipet Mandal, Ranga Reddy district. About 400 live in the gated community and another 1,000 in Green Space and Hallmark.

Just beside the compound wall of our gated community, land owners of our neighboring land are burying the bodies of their deceased family members since the last four years now.

About two years ago when they were burying one of their dead, we had communicated our concerns to them that this being a large residential area they should stop this practice of burying the dead as it is a serious hazard to the families who are residing here, to which they agreed. A few days back, we saw them burying one more body there.

The burial of bodies within a residential area creates health hazards besides contamination of ground water and air pollution etc. We have given a written application to the municipal commissioner and are waiting for a response. We request the authorities to take necessary action and stop this activity immediately.
— Residents of BRC Siva Hills, Puppalguda, Manikonda

SCR, please set right the Alwal road
Neither Cantonment Board nor Alwal Municipality is repairing the completely damaged road under the rail bridge. Both of them say that this road belongs to the railways.

Several representations were made to the SCR to lay a fresh road as water gets logged there during rains and vehicular traffic is disrupted. Early action needs to be taken in view of safety.
— N.S.R. Murthy Janapriya Shelters, Doveton, Macha Bolaram

Gayathreenagar road not swept for 3 months
The road in front of Gayathreenagar Residential Apartments, TSIIC Colony, Jeedimetla, Hyderabad, has not been swept clean by the GHMC for three weeks. The road sweeping staff engaged by the GHMC are not seen now. The condition is pathetic with garbage strewn on the road which is posing a health hazard to the residents.  We have lodged complaints with the GHMC via their customer care phone number 040-21111111 and even called their area supervisor but to our dismay there was no proper response. I request DC to highlight this issue in the 'My Issue' column and bring it to the attention of the GHMC for their prompt and immediate action.
— Dinesh JoshiGayathreenagar Residential Apartments, Jeedimetla

Garbage, open nala constrict Tolichowki road
This is in Tolichowki, 7 Tombs road. The volume of traffic has vastly increased after the closure of the Shaikpet Nala road. There is an open drain and there is a lot of garbage lying on the road. The 80-feet road has turned into a 20-feet road, which restricts traffic flow. The roads are in a very bad condition leading to a huge traffic jam every day. I request the authorities to look into this matter immediately and please remove the bottleneck,
— Akshit Agarwal Towlichowki

Data passed on in encrypted format

Hyderabad: Watch out for your lead toxicity levels