DECCAN CHRONICLE.
Published Oct 11, 2017, 2:31 am IST
Updated Oct 11, 2017, 2:36 am IST
Police identified the killers as notorious rowdy sheeters Karthik and Arun. While Karthik was arrested and is behind bars, Arun is absconding.

Bengaluru: The murder of a 28-year-old techie near Chocolate Factory on Taverekere Main Road early on Monday morning, which was initially suspected to be over personal enmity turned out to be a case of road rage. What is even more shocking is that it was over just Rs 500 that the accused demanded from the victim after a small accident.

The deceased, Pranay Mishra, a software engineer with Accenture – hailed from Odisha, was riding his way to his girlfriend’s house around 2.30 am on Monday when his scooter brushed against bike, which was being ridden by rowdies Karthik and Arun.

The rowdies picked up a fight with Pranay and demanded `500 to get the broken mudguard fixed. But Pranay refused to pay as it was not his fault. He started his scooter and went away from the accident spot, which angered the anti-social elements even further. They chased Pranay on their bike and blocked him. Pranay, who applied brakes suddenly, fell on the road. Taking advantage, the accused punched him in the face and stabbed him twice in the stomach before fleeing the spot, leaving Pranay in a pool of blood. 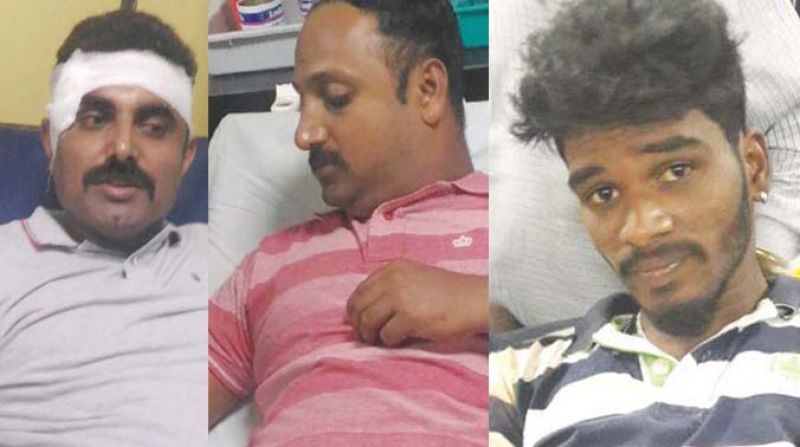 From left: Inspector Manjunath, SI Ravi and the accused, Karthik

Residents spotted Pranay and told police. Pranay got a call on his mobile from his girlfriend and residents told her Pranay had met with an accident. The residents and Pranay’s friends rushed him to a private hospital, where he was declared brought dead.

CCTV helped police crack the case
Three police teams, which were formed to crack the case, identified the accused within hours with CCTV footage. The rowdies’ bike was traced after footage identified the registration number. The owner said his friends Karthik and Arun, had taken the vehicle on Sunday night. They were traced to Huskur Gate.

“When we arrived, the accused, who were on a bike, fled after seeing us. We chased them towards Chitnamangala. They turned right and continued on a muddy road till they hit a dead-end. We told them to surrender, they refused. Arun, who was riding the bike, fled, while Karthik threw stones at us. When HSR Layout Sub-Inspector Ravi tried to arrest him, he attacked him a dagger. We opened fire, shot him in the leg and arrested him,” Koramangala Inspector Manjunath told DC. Manjunath and Madiwala Inspector Mallesh Bolethin fired one round each. During the arrest, inspector Manjunath also sustained minor injuries on his head.

Manjunath, Ravi and Karthik are being treated the St. John’s Hospital. The police have intensified manhunt for Arun.